The Italian lower house Chamber of Deputies approved the Cabinet, which has already been sworn in by President Mattarella. Prime Minister Conte promised a stronger pro-EU focus and less bickering. 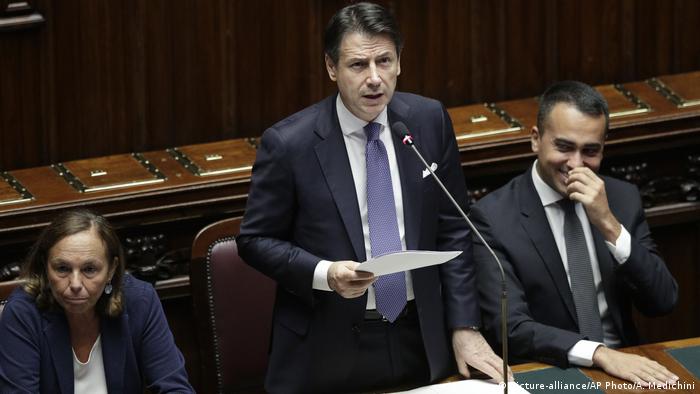 Italian Prime Minister Giuseppe Conte set out a more pro-EU agenda for his second Cabinet on Monday, something that would not have been possible during its previous coalition with the far-right.

Conte promised a "rigorous and responsible" approach to governing, hoping to assuage Italians used to years of political upheaval one that would be "pursued within, and not outside the perimeter of the European Union."

"We cannot in the coming months waste our time with disputes and clashes," Conte told parliament. "We must be sober in our words and active in our deeds."

If Conte's government loses the vote in the upper chamber Tuesday, it must resign.

Conte is technically partyless, but has ties to M5S.

The new Cabinet is the youngest in Italy's history. M5S leader and former deputy PM Luigi Di Maio (above right) is also the youngest foreign minister the country has ever had at age 33.

Di Maio's former co-deputy, Matteo Salvini of the far-right League party, has been replaced as interior minister by Luciana Lamorgese (above left), a top civil servant from Milan with no political affiliation.

The League ended its first run at the top of Italian government in August, when Salvini unsuccessfully tried to engineer a no-confidence vote in Conte and trigger fresh elections that he hoped would work out in his favor, as the League remains the most popular single party in the country.

Salvini's gambit backfired, and M5S instead sought to form a new coalition with the PD. After M5S members and President Sergio Mattarella backed the new government, they were sworn in on Thursday.

The League and a smaller far-right party, Brothers of Italy (FdI), had vowed to protest the new coalition outside the Chamber of Deputies in the Piazza Monte Citorio on Monday.