Wikipedia Italia has said that the bill puts "freedom of internet at risk." Newspaper publishers have argued that the law is necessary to protect the future of journalism. 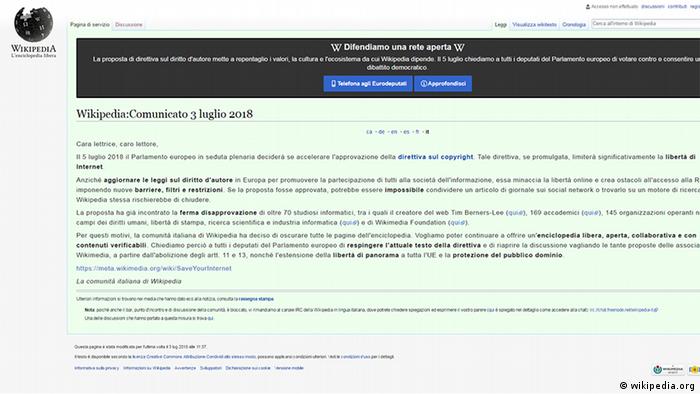 The Italian version of Wikipedia will be shut down for two days, a spokesman confirmed on Tuesday. The move came as a protest of a planned new European Union copyright directive that would implement new rules about licenses for content and, according to critics, places a heavy burden on IT companies to police what users upload.

"Freedom of internet at risk," reads the message now posted on the site.

"We welcomed the support of the government," Maurizio Codogno, a spokesman for Wikipedia Italia, was quoted by Italian news agency ANSA as saying.

Although the EU parliament has said that Wikipedia was excluded from the law as an encyclopedia, the company said its protest was in solidarity with others who would be affected.

Wikipedia "did not take action just to save itself but also to defend the free Web" and to "preserve the Web as a space that is open to less visible realities," Codogno said.

The online information hub was joined by 70 computer scientists, including creator of the world wide web, Tim Berners-Lee, 169 academics and 145 human rights, press freedom, and scientific research organizations in a letter of condemnation of the proposed law.

"(Wikipedia's position) goes well beyond copyright and reflects a deeper debate that does not just cover press freedom, but the functioning of our democracies too," Perrone said.

"This is not just threatened by the economic sustainability of the press, but also by unacceptable, misleading campaigns by platforms to influence the European Parliament."

According to Italian daily Il Fatto Quotidiano, a spokesmen for the European Commissions office for the digital single market said that the law was necessary to combat the "large amounts of copyrighted content that have been uploaded by users who do not own the rights."

Both Wikipedia Italia and IT experts have argued that the law not only poses a threat to creative freedom, but that it also has not been debated long enough for the less tech-savvy parliamentarians to understand what they're voting on.

Wikipedia will be dark in Italy until Thursday, the day the proposed bill is set to be voted on in Brussels.

The Federal Court of Justice is to rule on whether or not Google video service YouTube is liable for copyright infringement and what damages if any are owed. The case stems from a Hamburg producer who sued YouTube. (09.05.2018)

Istanbul authorities have withdrawn an invitation sent to Wikipedia founder Jimmy Wales to attend a major conference in the city. The reversal comes after Turkey blocked the website, citing objections to its content. (02.05.2017)

Amazon, the world’s largest online retailer, is up before the German Federal Court of Justice on Thursday with two small firms taking issue over the way in which the tech giant handles online searches. (15.02.2018)