Italian police clear out Via Cupa migrant camp in Rome | Europe | News and current affairs from around the continent | DW | 30.09.2016

Italian police clear out Via Cupa migrant camp in Rome

Activists have criticized Rome's city council for not providing alternative housing for migrants displaced after police cleared a camp in the Italian capital. Italy is on the front line for irregular migration to the EU. 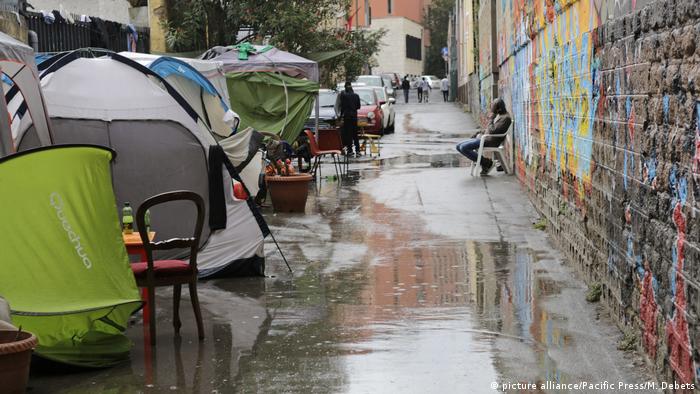 Italian police on Friday cleared out a migrant camp in Rome known for housing an estimated 60,000 migrants over the past year.

The Baobab center, an NGO that ran a shelter in Rome's Via Cupa, criticized the police and the city council for failing to provide an alternative option to house migrants transiting through the Italian capital.

Italian authorities recently caught more than 40 Sudanese migrants in the Italian town of Ventimiglia on the border with France and deported them. Emanuela Barbiroglio reports from the border.

"Shutting down the camp doesn't solve the problem. There will still be migrants looking for a place to sleep tonight," Baobab co-founder Andrea Costa told the Reuters news agency.

Volunteers are searching for alternative buildings to house those displaced by the police operation, including an abandoned school, Costa added.

"The tents you are carrying away were those donated by citizens, the food you're throwing out was donated by Father Konrad, the almoner of the pope," said a sharp statement from the group on Facebook, directed at Rome's police.

"You will never eradicate our idea of hospitality and coexistence."

In December, local authorities shut down a shelter run by the non-governmental organization, prompting volunteers to move tents and mattresses out on the street.

Although Italy provides shelter for some 160,000 people seeking asylum, it does not offer housing options for those attempting to transit through the country towards northern European nations.

Italy, considered a front-line country for irregular migration to the EU, has received more than 110,000 migrants in 2016. The majority of those claiming asylum have made the perilous journey across the central Mediterranean Sea, where more than 3,000 people lost their lives this year.

Since 2015, authorities have sought to document all irregular migrants entering the country under a deal that could witness thousands resettled across the EU.

However, former Soviet nations, including Hungary and Poland, have rejected the resettlement scheme, casting doubt on the future of asylum seekers in Italy.