Israeli forces and Palestinian militants have exchanged fire, and Israel has launched air raids on the Gaza Strip. There were no reports of injuries during the exchange, which threatens a two-year-old ceasefire. 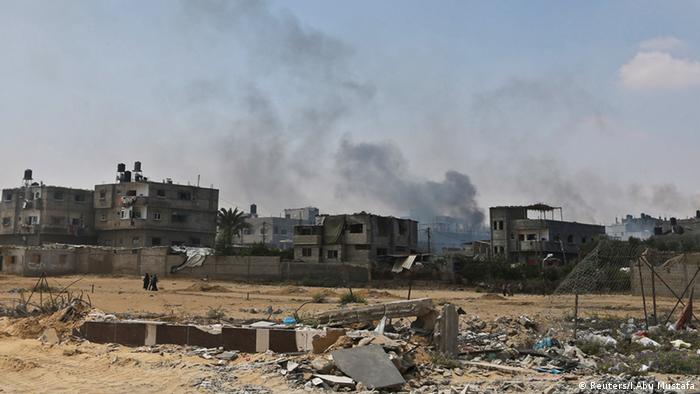 An exchange of mortar fire and airstrikes along the Israeli border with the Gaza Strip broke a nearly two-year-old ceasefire on Wednesday.

Israeli airstrikes slammed into Gaza's international airport and farms near the southern city of Rafah, according to the Hamas-run Interior Ministry.

Israel claims it hit five sites operated by Hamas, but there were no reported injuries on either side of the border, and a spokesman for the Israeli Defense Forces (IDF) said they would continue to protect civilians from "all Hamas terrorist threats."

The airstrikes came a day after the two sides traded fire, with Israeli tanks shelling the Palestinian enclave, saying it was in response to mortar fire from Gaza.

Hamas' armed wing, the Ezzedine al-Qassem Brigades, said it was ready to respond to Israel's strikes.

"We will not permit this aggression to continue and the enemy should not invoke any reason and leave the Strip immediately," the group said in a statement.

The UN's special coordinator for the Middle East peace process, Nickolay Mladenov, said he was "concerned" at Wednesday's escalation.

"It is critical that peace be maintained to ensure the safety and security of Israelis and Palestinians alike," he said in a statement.

It's not clear what prompted Hamas to launch its initial cross-border attack.

By one account they were responding to the presence of Israeli Defense Forces searching for tunnels dug by the Palestinians. Israel has accused Hamas of building tunnels under the border in order to attack Israel, and IDF forces were reportedly searching for such tunnels when they came under fire.

Fear of tunnels is what led Israel to launch a deadly assault on Gaza in 2014. The 50-day conflict killed 2,251 Palestinians, mostly civilians, and 73 Israelis, including 67 soldiers, according to the United Nations.

But another account says Israeli Prime Minister Benjamin Netanyahu came to visit the area, and lauded the success of the nearly two-year-old ceasefire.

"We are nearing the end of close to two years since Operation Protective Edge," he said, referring to the 2014 conflict. "These have been the quietest two years we can recall since Hamas came to power."

Netanyahu's visit could have triggered a reaction, according to Daniel Nisman, founder of the Levantine analysis group.

"Maybe for Hamas," he told the Agence France-Presse, "that lit one fuse too many."

One year after the war in Gaza

Palestinian prime minister: 'We are committed to non-violent resistance'

Despite continuing violence between Israelis and Palestinians, Hamdallah stressed his commitment to non-violent resistance in an interview with DW. He did not, however, condemn recent attacks by Palestinians. (15.03.2016)