Naftali Bennett has been welcomed in Abu Dhabi in what he called a "historic" visit — the first of its kind after the two countries established diplomatic ties last year. 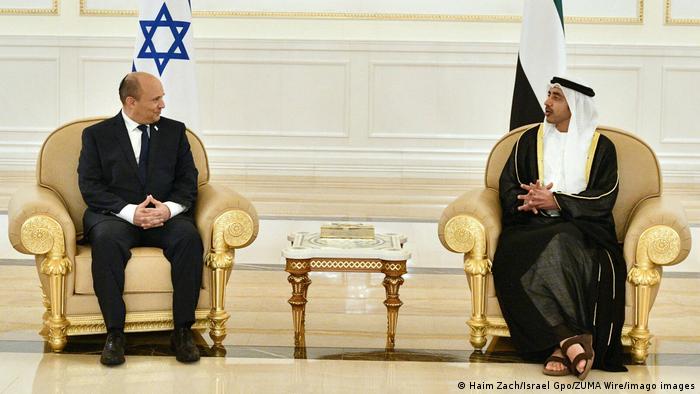 Bennett said he was "optimistic that this relationship can set an example of how we can make peace here in the Middle East," Bennett said.

The two leaders had "meaningful, in-depth and straightforward talks about our two nations, about the region and about our economy and technology and what we can do together," Bennett added.

The Israeli prime minister arrived in the United Arab Emirates on Sunday, marking the first official visit by an Israeli premier, after the two countries established diplomatic ties last year.

The prime minister said he appreciated the "very warm hospitality."

"I'm very excited to be here ... as the first official visit of an Israeli leader. We are looking forward to strengthening the relationship," he said.

Israel and the UAE last year signed a normalization deal, brokered by the administration of former US President Donald Trump under the "Abraham Accords'' — a series of accords that normalizes diplomatic relations with several Arab countries, including Bahrain, Sudan and Morocco. The accords were named after the biblical patriarch revered by Jews, Christians and Muslims.

"In just one year since normalizing our relationship, we've already seen the extraordinary potential of the Israel-UAE partnership. This is just the beginning," Bennett said.

Bennett's trip takes place against the backdrop of struggling nuclear talks with Iran, who has pushed for sanctions relief in Vienna as world powers try to revive the 2015 Iran nuclear deal.

Both Israel and the UAE have long shared fears over Iran's nuclear activities. Their agreement to normalize ties only increased tensions with Tehran, which says its nuclear program is meant for peaceful purposes.

In recent weeks, Israel has reiterated threats to take military action against Iran if diplomacy fails.

Israel-UAE cooperation has been condemned by some Palestinians, whose diplomacy with Israel stalled in 2014.

Bennett's visit "violates the Arab consensus that is supposed to support the Palestinian cause amid the challenges imposed by the (Israeli) occupation," Reuters cited Wasel Abu Youssef of the Palestine Liberation Organization (PLO) as saying.