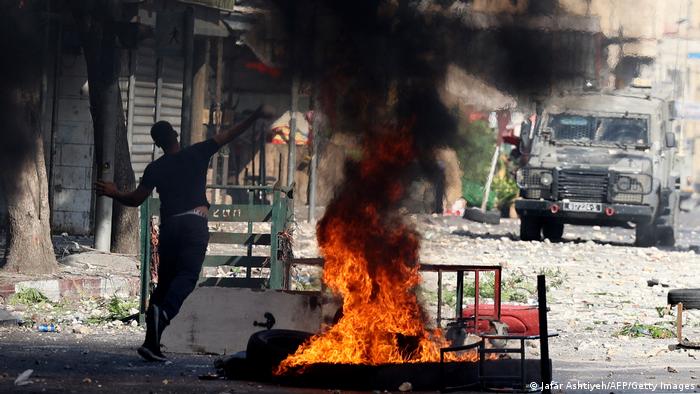 Israeli forces on Tuesday said they raided the city of Nablus in the occupied West Bank, killing two militants.

Among the four deaths were two teenagers who were killed in separate incidents, Palestinian authorities said.

What we know about the raid

An Israeli statement said, "The terrorist Ibrahim al-Nabulsi was killed in the city of Nablus" after he refused to surrender when Israeli forces surrounded his house.

The statement added that "another terrorist who was staying in the house" also died in a gun battle between the two militants and Israeli forces.

Al-Nabulsi was a commander of the Al-Aqsa Martyrs' Brigade — the military wing of Palestinian President Mahmoud Abbas' Fatah party.

The network of militant groups is active in the West Bank and is considered a terrorist organization by Israel and much of the West.

The West Bank is a landlocked territory now under Israeli or joint Israeli-Palestinian Authority control. The Israeli occupation of the West Bank is deemed illegal by much of the international community

Israeli police said al-Nabulsi had been wanted for a string of shootings in the West Bank earlier this year.

Meanwhile, the militant group said that "the response will fit the crime."

A spokesman for Abbas warned that continued violence could further ignite the region. He accused Israel of shedding Palestinian blood as part of a political campaign ahead of parliamentary elections in November.

The latest raid in the West Bank came just days after a cease-fire put a halt to the worst cross-border violence between militants in Gaza and the Israeli army since a war in May 2021.

Israel had launched what it called a "preemptive" operation, dubbed "Breaking Dawn," on Gaza, killing several militants from the Palestinian Islamic Jihad group. The group launched a barrage of rockets into Israeli cities in response.

Hundreds of Palestinians were injured and at least 44 people were killed in Gaza, including several children, according to Palestinian health authorities. Israel said the children were killed due to a misfired rocket by Islamic Jihad.

The Israeli operation in the Gaza Strip followed a string of raids by Israeli forces targeting militants in the West Bank. Those operations were intensified after a wave of terror attacks in Israeli cities earlier in the year.