In the bubble — Tel Aviv after the attack

Tel Aviv is back to "normal" after a terror attack. DW correspondent and Tel Aviv resident Sarah Hofmann examines what that means as military operations continue just kilometers away in the Palestinian territories. 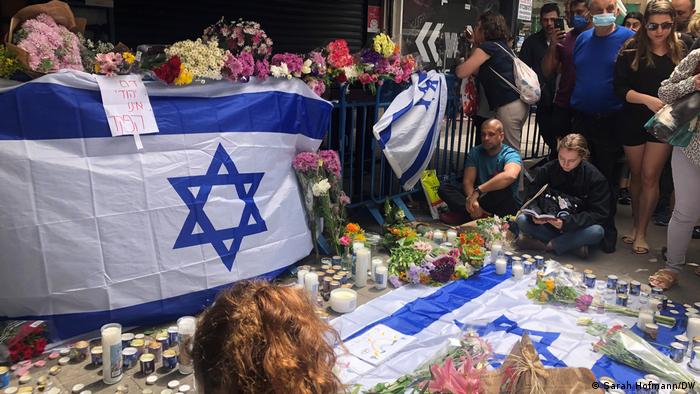 Mourning the victims of a recent terror attack that killed three and injured seven in Tel Aviv, Israel

Tel Aviv seems unusually quiet these days. Restaurants known for long lines of people waiting for a table still have seating available for the lunch and dinner rush. Perhaps it's the Passover holiday, or maybe its the memory of the terrorist attack on a bar in central Tel Aviv earlier this month.

It was a Thursday, the beginning of the weekend in Israel, when we heard the wail of ambulance and police sirens. Not 600 meters (650 yards) from our apartment, a Palestinian terrorist had shot several people in a bar. Three of them died and seven others were injured, some seriously. It was the fourth terrorist attack in Israel in just two weeks.

Not long after the first news reports, my cell phone started buzzing: "Are you safe?" a father in our kindergarten's WhatsApp group asked. "Lock the doors," he wrote. "The perpetrator hasn't been caught yet."

Ding, ding, ding went my cell phone. People react quickly in such situations. Friends of Tomer Morad and Eytam Magini, 27 and 28 years old, must have quickly suspected the two were among the victims — because they did not answer their phones. 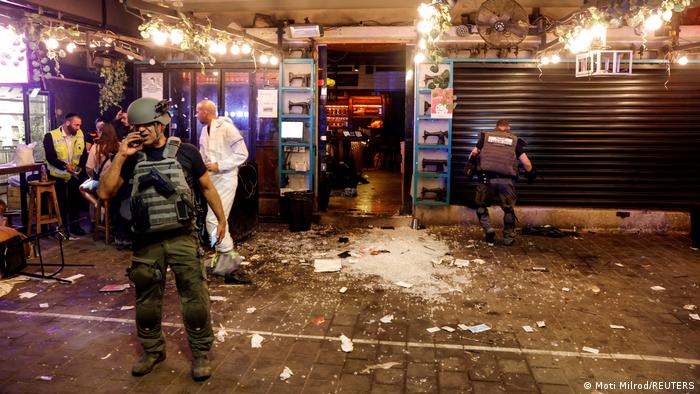 Rescue and security forces rushed to the scene of the attack

When Israel is attacked, be it by terrorists on the ground or rockets from Gaza, there is an odd feeling of familiarity in Tel Aviv, a largely anonymous big city. Whether you run across a pajama-clad neighbor in a bomb shelter at two in the morning, or a stranger on the street the morning after an attack, all it takes is one look that says: I know how you feel.

The actual probability of being injured or even killed in Israel in a terrorist attack or by rockets from Gaza is much lower than that of having a bad car accident. In contrast to the war in Ukraine, life in Israel is "quite normal" at the moment.

But what does "normal" mean? After all, terror has a psychological effect. People flinch when sirens sound, look around when ambulances rush past. "What would have happened if I had dragged myself out to go jogging that evening?" I asked myself in the days after the attack. I probably would have run right past the scene. Perhaps I would have seen the third fatality, Barak Lufan, out of the corner of my eye: A 35-year-old Israeli whose wife must now raise their young children alone. 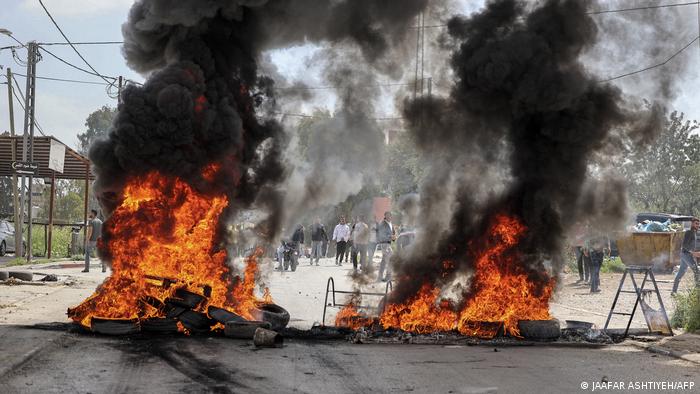 20 years after construction of the separation barrier

Tel Aviv is often referred to as a bubble where bohemians sip coffee, while less than an hour's drive away in Qalqiliya, Tulkarm and other towns, Palestinians live under Israeli occupation — behind a wall that Israel says was built to prevent terrorist attacks. Construction of the so-called separation barrier began almost exactly twenty years ago, during the Second Intifada.

Following the April 7 attack on Tel Aviv, the Israeli army began several military operations in Jenin and other locations in the occupied West Bank. At least 23 Palestinians have since been killed, including militants — but also 14-year-old Qusay Hamamra. The Israeli army claims he threw a Molotov cocktail at them. According to some agency reports, he was entirely uninvolved.

A 40-year-old woman was shot dead after "suspiciously" approaching soldiers, the Israeli army said. According to Palestinian sources, the woman was a visually impaired widow and mother of six. 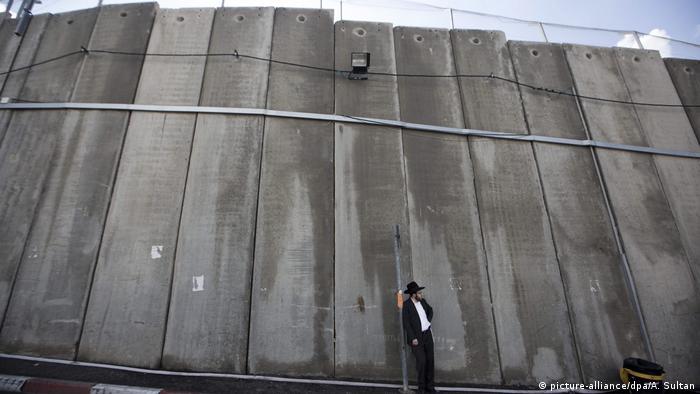 On Tuesday, Israel Defense Forces (IDF) carried out attacks in Gaza. Authorities say they targeted a weapons manufacturing site after a rocket fired from Hamas-controlled Gaza was intercepted Monday.

The current situation is not comparable to that of the Second Intifada twenty years ago. But it recalls memories and triggers trauma among Israelis and Palestinians alike. The Second Intifada is said to have greatly reduced empathy for the victims of the other side. Indeed, to this day, many cannot empathize with the plight of civilians on the other side of the conflict.

The separation barrier has made human contact difficult over the past two decades. Apart from their military service, most Jewish residents of Tel Aviv have never met a Palestinian family. Palestinians used holes in the barrier to go to work in Israel, sometimes illegally; now these gaps are being closed. Two of the assassins in the most recent attacks entered Israel through such holes in the fence. 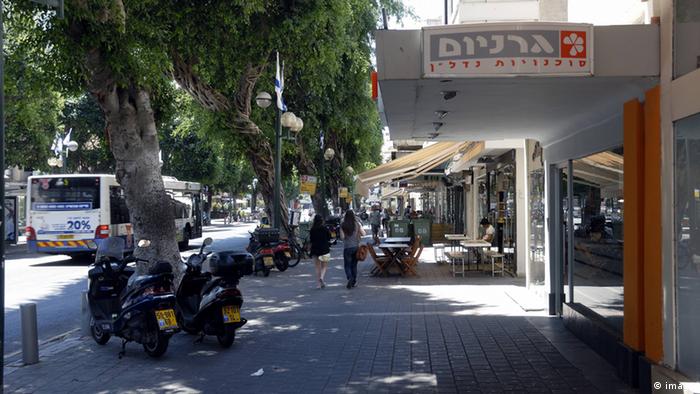 It's true, Tel Aviv is a bubble.

Most of the time, in this bustling, sun-drenched city on the Mediterranean, it's easy to ignore what's happening in the occupied territories. In Tel Aviv, it's rare that a neighborhood is cordoned off like on April 7, when anti-terrorism units stormed into the bar. And if they are, it's Israeli soldiers who come to protect you. Many Palestinian families, on the other hand, have often seen Israeli soldiers storm into their homes in the middle of the night, M-16 rifles at the ready.

Many Israelis do not believe there will ever be peace with the Palestinians. A friend has made it her mission to make sure her family has more than one passport — a Sephardic Jew born in London, she organized Israeli and British passports as well as Spanish and Portuguese passports for herself and her children. "You never know what the future holds," she argues.

A few people, including author and psychotherapist Ayelet Gundar-Goshen, actively fight for an end to the occupation and peace with the Palestinians. 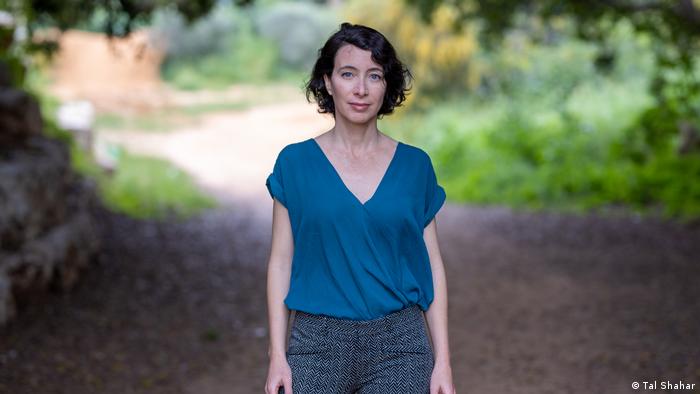 She told me in an interview after the recent Gaza war that she had no choice but to get involved in politics. She said the thought of her sons pointing guns at Palestinians as soldiers in the Israeli occupation army sickened her. She wants her children to be neither victims nor perpetrators, she says.

It is at times like these that people realize how much of a bubble Tel Aviv really is. A bubble that will burst again for a short time when the next sirens wail. For most in the city, Jenin and Nablus, less than 100 kilometers (about 60 miles) away, seem very distant indeed.

'It's the third attack within a week, and that is worrying people'

How does EU accession work?