Israel keeps mum on its chemical weapons | World | Breaking news and perspectives from around the globe | DW | 22.09.2013

Syria has agreed to dismantle its chemical weapons arsenal over the next year. Some voices are now calling for Israel to do the same. But it remains unclear whether or not the Jewish state has such weapons. 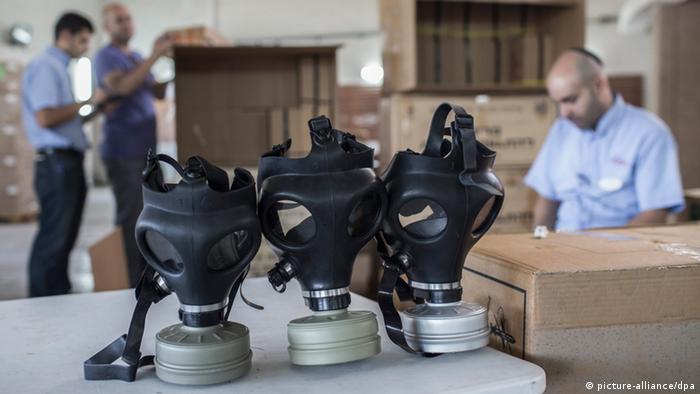 The international pressure seems to have worked - at least for the time being. Syrian President Bashar al-Assad's regime, which has been accused of using sarin gas against civilians, has agreed to join the Chemical Weapons Convention (CWC) in October.

Should Syria follow through with its promise, there would be only six states left in the world that have not signed the convention: Egypt, Angola, South Sudan, North Korea, Myanmar and Israel.

Some voices are now calling for Israel to publicly declare whether or not it possesses chemical weapons, and if it does, to destroy them. The left-liberal Israeli newspaper Haaretz wrote in an editorial last Monday that "it would be a pity if in the future Israel finds itself in the position of Syria -forced to sign the convention under international pressure."

For more than a decade, the world community has waited in vain for the Israeli government to join the convention. Israel's reluctance to ratify the convention could indicate that the Jewish state has a chemical weapons arsenal, according to Mideast expert, Guido Steinberg, of the German Institute for International and Security Affairs.

"It would make sense, if one wants to avoid inspections," Steinberg, with the German Institute for International and Security Affairs, told DW. "But in the end, we only know that Israel has nuclear weapons. When it comes to chemical weapons, we don't know."

But according to Foreign Policy magazine, a CIA report from 1983 indicates that Israel does indeed have chemical weapons. The report details production facilities for poison gas in the Negev Desert, and says that Israel possesses nerve and mustard gas as well as chemical agents for crowd control - including the appropriate shells.

At the time, the CIA also found indications of sarin gas in Israel, according to Foreign Policy. That's the type of nerve gas that was used in Syria on August 21 of this year. Israel, for its part, has also been accused of using phosphorous in the Gaza Strip in 2009.

No pressure expected on Israel

According to Mideast experts, it's unlikely that pressure will mount for Israel to declare whether or not it has chemical weapons.

"I believe that's due to a certain rhetoric," Rachid Ouaissa, with Marburg's Center for Near and Middle Eastern Studies, told DW. "The kind of international pressure that has been put on Syria will not be applied against Israel." 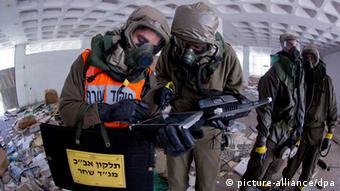 Neither the United States nor the United Nations has made demands of Israel comparable to those made of Syria. And even if international pressure does grow in the coming weeks, it's unlikely to make any impression on Israel, according to Steinberg.

"It's critical that the American government acts," Steinberg said. "And it definitely will not intensify pressure on Israel. And what the Europeans think about security policy has never really mattered to the Israelis."

It's part of the political culture in Israel not to publicly disclose information about weapons arsenals - whether they be nuclear or chemical, Steinberg said. In addition, President Assad might have calculated that, by joining the convention, he could turn the world community's attention to Israel.

"Don't fall for it," Steinberg said. "This is about Syria's chemical weapons. And it will be difficult enough to effect a change in Syria's policy."

Rachid Ouaissa agrees with Steinberg and advises to put the question of Israel's chemical weapons aside for the time being. Currently, there are other actors that present more pressing causes for concern, according to Ouaissa.

"First, Syria is on the agenda - then (North) Korea, then Hezbollah and then Egypt," he said, adding that Israel is hardly comparable with the Assad regime.

"Israel found its place in the world system long ago and enjoys a good standing, even with all its stupidities and unfair behavior," Ouaissa said.

And in Steinberg's view, it's not altogether unlikely the Jewish state would join the CWC one day.

"I could imagine such a scenario at the end of a political process, in which the Americans convinced the Israelis that it made little sense to insist on chemical weapons," Steinberg said.

"Anyway the Israelis, because of their nuclear arsenal, have military superiority over all the neighbors in their region," he added.

In 1988, the US turned a blind eye to the gassing of Iraqi Kurds by Saddam Hussein. Decades after the attack at Halabja, Washington now seeks to enforce the global prohibition on chemical weapons in Syria's civil war. (19.09.2013)