Haunted by Halabja, US seeks Syrian solution | World| Breaking news and perspectives from around the globe | DW | 19.09.2013

In 1988, the US turned a blind eye to the gassing of Iraqi Kurds by Saddam Hussein. Decades after the attack at Halabja, Washington now seeks to enforce the global prohibition on chemical weapons in Syria's civil war. 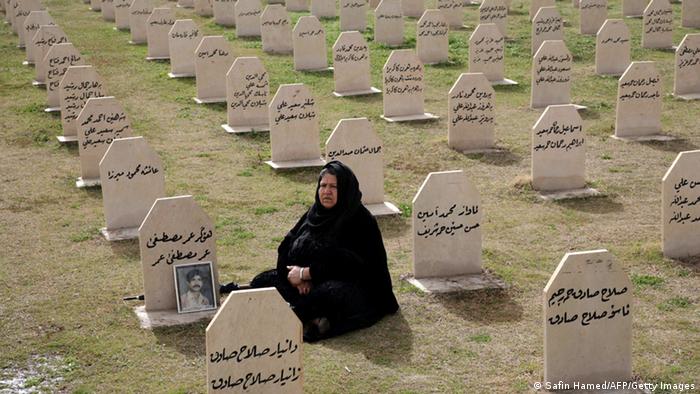 A quarter century ago, Washington turned a blind eye to what happened at Halabja. On March 16, 1988, Iraqi dictator Saddam Hussein unleashed poison gas against the Kurdish city, killing more than 3,200 people, according to a 1993 Human Rights Watch report.

"The lesson of Halabja is unfortunately that the condemnation came too late - two months later - but also it came six years too late," Joost Hiltermann, the author of Poisonous Affair: America, Iraq and the Gassing of Halabja, told DW.

"Because Halabja was the culmination, the climax of a steady increase in the use of chemical weapons in quantity and in quality, meaning more lethal agents over time," said Hiltermann, also the chief operating officer at the International Crisis Group in Brussels.

In the early 1980s, the United States had begun shifting away from its policy of neutrality in the Iran-Iraq war, strengthening and re-establishing full diplomatic ties with Baghdad in 1984. Iraq had severed ties with Washington in 1967 over the Arab-Israeli Six Day War.

In a now declassified State Department analysis from 1983, which examined the consequences of a potential US tilt toward Iraq, the author acknowledged Washington's growing support of the Hussein regime.

"Our policy of strict neutrality has already been modified, except for arms sales, since Iran's forces crossed into Iraq in the summer of 1982," Johnathan T. Howe, who managed relations between the State and Defense Departments, wrote to the undersecretary of state for political affairs, Lawrence S. Eagleburger. 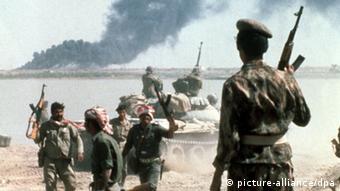 Iraq invaded the Islamic Republic in 1980.

"The steps we have taken toward the conflict since then have progressively favored Iraq. (We assume that other actions not discussed here, such as providing tactical intelligence, would continue as necessary)," Howe wrote.

In its effort to prevent a victory by arch-enemy Iran in the Middle East, the Reagan administration had supported Iraq in a number of ways short of direct military aid. The White House provided Baghdad with tactical intelligence, diplomatic and financial assistance, and prevented arms sales to Iran, according to Bryan Gibson, an expert on the conflict.

"The US of course knew that the Iraqis had been using chemical weapons in every major military exchange between Iran-Iraq from 1984 onwards," Gibson, author of "Covert Relationship: US Foreign Policy, Intelligence and the Iran-Iraq War," told DW.

But according to declassified State Department documents, the US knew as early as November 1, 1983 that Iraq had deployed chemical weapons against Iranian attacks.

"We have recently received additional information confirming Iraqi use of chemical weapons," Howe wrote in an information memorandum to Secretary of State George P. Shultz. "We also know that Iraq has acquired a CW production capability, primarily from Western firms, including possibly a US foreign subsidiary."

This information put the US in a predicament. Since the start of the Iran-Iraq war, the Reagan administration had been gradually upgrading previously strained ties with Bagdad. But Washington had also taken a strong public position against the use of chemical weapons. Vice President George H.W. Bush publicly advocated a UN treaty that would completely ban the possession and production of such weapons.

US encourages 'no vote' at UN

Ultimately, the US publicly condemned Iraq in 1984, sparking outrage and surprise in Baghdad. Washington also banned the export of chemical precursors to both Iraq and Iran.

Despite its condemnation and export ban, Washington provided diplomatic cover for Iraq at the United Nations. In October 1983, the Iranians had called on the UN secretary general to investigate Iraqi poison gas attacks. By 1984, the UN Human Rights Commission was considering an Iranian draft resolution condemning Iraq for using chemical weapons. 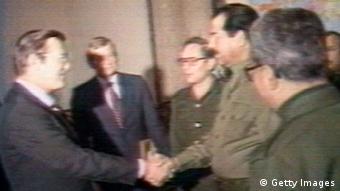 US envoy Rumsfeld met personally with Hussein in 1983 to upgrade ties.

Secretary of State Shultz told the US delegation to let the resolution die, arguing that the commission "is an inappropriate forum for matters dealing with chemical weapons."

Washington re-established full diplomatic relations with Baghdad for the first time in 17 years on November 4, 1984. As Iraq began to weaken under Iranian attacks, the Reagan administration started increasing its support for the regime in Baghdad in a bid to end the war with Iran for good. According to Iran-Iraq war historian Gibson, a clandestine program called Operation Druid Leader was rolled out. The campaign was run by the Defense Intelligence Agency.

"In 1988, the defense intelligence went to Baghdad with these intelligence briefings that included a systematic list of targets," Gibson said. "Basically, they told the Iraqis, if you hit these targets in succession, you will be able to cripple Iran's ability to fight the war."

After hitting the targets, Baghdad went on the offensive, launching a campaign to retake the Iranian-occupied Faw Peninsula in Iraq's south.

"They opened the offensive with a massive chemical bombardment and then did mopping up operations," Gibson said. "They took the peninsula in a matter of hours."

That same year, Iran moved to capture the northern Iraqi city of Halabja. Baghdad deployed poison gas against the Kurdish town in retaliation. It was the worst chemical weapons attack against a civilian population center in modern times, according to the Federation of American Scientists.

Congress, galvanized by images of the attack beamed from region, moved to impose broad sanctions against Iraq in response. But the Reagan administration, unwillingly to give Iran an opportunity to seize the moral high ground, opposed congressional action. 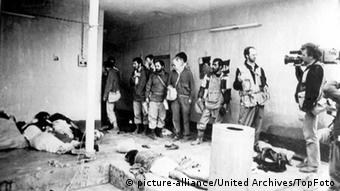 The final bill, called the Prevention of Genocide Act of 1988, passed in the Senate but ultimately failed in the House of Representatives.

"It stalled in the House partly because of the lobbying of agricultural interests, who had these large stakes in these government-subsidized exports to Iraq," Bruce Jentleson, author of "With Friends like These: Reagan, Bush and Saddam 1982-1990," told DW.

In Jentleson's assessment, the bill also failed because of Reagan's ongoing calculation that "the enemy of my enemy is my friend," and also because the administration did not want to rock the boat and look soft on Iran ahead of Bush's presidential campaign taking shape in 1988.

In the initial statement made by the US after the attacks, the State Department suggested that both sides might have used chemical weapons in Halabja. According to Hiltermann, Washington also delayed UN Security Council action on the attacks for weeks.

"The Iraqis started using that statement from the US State Department to suggest that in fact the Iranians might have used chemical weapons in Halabja, and not Iraqi forces, and that any casualties were the result of Iranian action," Hiltermann said.

According to witness testimony collected by Human Rights Watch, the Iraqi military was responsible for the attack.

As in the current case of Syria, UN chemical weapons experts were sent to Halabja, where they confirmed that poison gas had been used.

But international action was never taken to punish Iraq for gassing Halabja. According to Hiltermann, two different precedents can be drawn from the world's response.

"It was an example that if you're a nasty dictator, you look at it and say, 'that was a very useful weapon for Saddam Hussein, and it can work for me as well under the right circumstances,'" Hiltermann said.

"The other precedent is that of course because of Halabja, and the use of chemical weapons for six years during that war, that the international community came together and signed the Chemical Weapons Convention, which really re-enforced the norm again and extended it," he continued.

"What we see now is that the user of chemical weapons, supposedly, if it is the Syrian regime - which is what it looks like - was not a signatory to this convention, so it's the outliers [who use chemical weapons]."

The declassified documents referenced in this article can be accessed online at the National Security Archive, affiliated with George Washington University in Washington D.C.

On the 10th anniversary of the US invasion of Iraq it's worth reflecting on whether containment - rather than intervention - is Washington's preferred option in dealing with crises, writes Richard Gowan. (20.03.2013)