World leaders have urged a truce between Israel and Hamas but the UN Security Council has made no progress in issuing such a statement. The death toll in the fighting continues to rise. 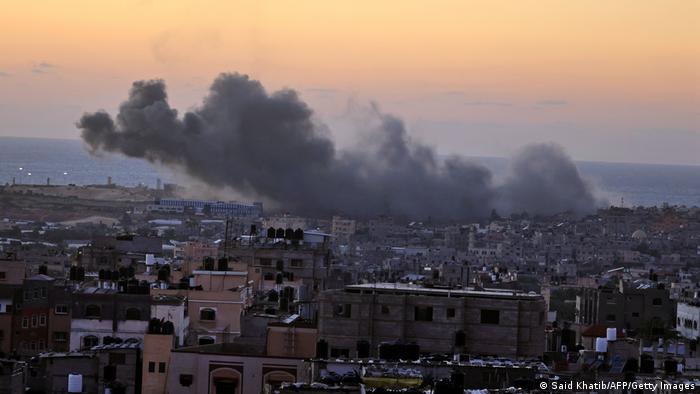 The Israeli military said it struck militant targets around the towns of Khan Younis and Rafah, with 52 aircraft hitting 40 underground targets over a period of 25 minutes.

Officials cited by the AP news agency said six people were killed in Wednesday's airstrikes. The agency also reported that a home belonging to 40 members of an extended family in the southern Gaza town of Khan Younis had been destroyed.

The airstrikes come a day after the United Nations Security Council ended a meeting about the ongoing crisis in Israel and Gaza  without its 15 members agreeing on a public statement.

The United States had earlier blocked the Council from issuing a press statement calling for deescalation.

France announced it was seeking a Security Council resolution calling for a cease-fire between Israel and Hamas, the Palestinian militant group that controls Gaza.

Unlike statements, which require full consensus, Security Council resolutions are legally binding. They require at least nine "yes" votes and no veto by any of the five permanent members.

What have world powers said?

European Union foreign ministers called for an immediate cease-fire to stop the fighting between Israel and Hamas, the bloc's foreign policy chief Josep Borrell said. Hungary refused to support the statement released by the 27-member bloc.

"The most important thing now is that the weapons are silent and that there are no more casualties. Only Hungary saw it differently, for whatever reason," he told German news program ZDF Morgenmagazin.

German Chancellor Angela Merkel and Jordan's King Abdullah II, meanwhile, "agreed that initiatives for a swift cease-fire should be supported in order to create the conditions for the resumption of political negotiations," her spokesman said in a statement.

France, which has been calling for a rapid cease-fire for several days, said it supported mediation led by Egypt.

US President Joe Biden backed a cease-fire during a Monday call with Israeli Prime Minister Benjamin Netanyahu. However, Biden stopped short of openly demanding a truce.

What have Israel and Hamas said?

Despite intensified calls from world leaders for a cease-fire, Israeli Prime Minister Benjamin Netanyahu has insisted that Israel will continue fighting for "as long as necessary to bring ... quiet back to the citizens of Israel."

The prime minister would also not rule out a full conquest of the Hamas-controlled territory of Gaza.

"There are only two ways that you can deal with [Hamas]," he told a group of foreign ambassadors in Tel Aviv on Wednesday.

"You can either conquer them, and that's always an open possibility, or you can deter them, and we are engaged right now in forceful deterrence, but I have to say we don't rule out anything."

A senior Hamas official, Moussa Abu Marzouk, was quoted by the New York Times as saying that the Palestinian militant group has been seeking a cease-fire in Gaza.

However, he says, "Israel demanded that Hamas unilaterally hold its fire first for 2-3 hours before Israel decides if it will do the same."

Abu Marzouk says Hamas will agree to a ceasefire that is "simultaneous and mutual."

However, media reports suggested that there was no commitment from either side.

What is the situation on the ground?

The death toll continues to increase with Israel carrying out more airstrikes on Gaza and Hamas firing rockets toward Israel.

Israel said over 3,000 rockets had been launched from Gaza, some falling short and others shot down by its Iron Dome air defenses.

So far, at least 219 Palestinians have been killed in airstrikes, including 63 children, with more than 1,500 people wounded, according to the Gaza Health Ministry.

Hamas and Islamic Jihad say at least 20 of their fighters have been killed, while Israel says the number is at least 130, according to Reuters news agency.

Twelve people in Israel, including a 5-year-old boy, have been killed in Hamas rocket attacks.

Palestinians across Israel and the occupied territories went on strike Tuesday to protest Israel's air raids on Gaza.

The strike is also directed against actions taken by Israeli security forces against Muslim worshippers at the Al-Aqsa mosque compound, as well as forced evictions in the east Jerusalem neighborhood of Sheikh Jarrah.