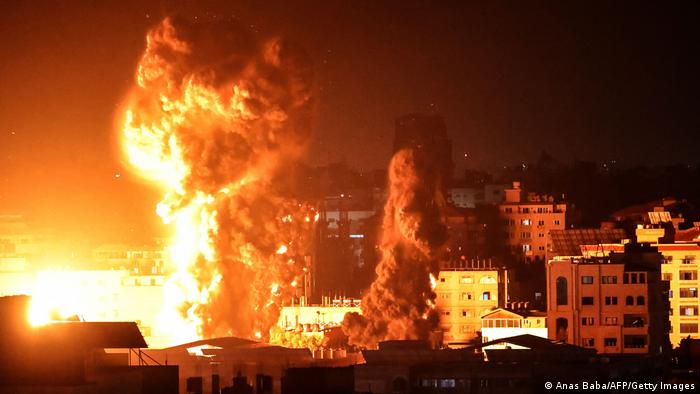 On Sunday, Prime Minister Netanyahu said he wouldn't rush to seek a ceasefire

As violence continues into a second week, UN Secretary-General Antonio Guterres has called for an immediate end to the fighting. But any ceasefire would be short-lived unless it were combined with broader negotiations. The question is which international body or government could take the lead role in such talks.

Guterres said the United Nations was "actively engaging all sides toward an immediate ceasefire" and called on the government of Israel and the Hamas organization "to allow mediation efforts to intensify and succeed." However, the United Nations has struggled to play its intended role of resolving conflicts diplomatically in the case of Israel-Palestine because of US stonewalling in the Security Council.

At a meeting on Sunday, council members condemned the violence but failed to agree on a public statement. China — the current president of the Security Council — blamed the United States, the lone holdout against the measure. The US State Department declined to comment on the issue.

The United States has previously used its veto and seat on the Security Council to block resolutions and statements on Israel.

Israel is the US's closest ally in the Middle East, and the United States is a vital source of military aid and equipment for the country. That relationship has always given the US significant leverage in bringing Israel to the negotiating table at times of heightened conflict.

Relations reached a new peak during the presidency of Donald Trump, who carried out measures popular with Israelis — including moving the US embassy from Tel Aviv to Jerusalem. Trump's failed peace proposal was very much on Israeli terms and would have recognized settlements in occupied territory as part of Israel.

The Biden administration seems to have been caught on the back foot by the most recent escalation of the conflict. The president had not intended to make the issue a priority after previous administrations — including the Obama administration, in which Joe Biden was the vice president — failed to make headway. The United States currently does not have an ambassador in Israel.

"The US was caught off guard, they were not planning to deal with it (Israel-Palestine) on a daily basis," Dan Arbell, scholar-in-residence at the Center for Israeli Studies at American University, told DW. "They wanted to focus on conflict management rather than conflict resolution and restore a relationship with the Palestinians and establish a dialogue."

On Monday, Biden told Israeli Prime Minister Benjamin Netanyahu that he supports a ceasefire, but stopped short of calling for an immediate halt to Israel's bombing campaign. Meanwhile, the US State Department envoy for Israel-Palestinian affairs, Hady Amr, has held talks with Israeli and Palestinian delegations. His boss, Secretary of State Antony Blinken, said on Monday that the US was ready to provide help if Israel and Hamas were serious about ending their hostilities.

The Arab League has called for the United States to take a more active role in the Middle East peace process. It remains unclear how quickly the Biden administration can come up with a viable plan for the conflict, which previously had not been one of its priorities.

"President Biden has, in terms of foreign policy, been focused on Iran and Afghanistan and, in contrast to his predecessor, has chosen not to get directly involved in the Israeli-Palestinian quagmire," Grace Wermenbol, non-resident scholar at the Middle East Institute, told DW. "With the latest escalation, however, Biden and his foreign policy team might be forced to reconsider their immediate international priorities."

The European Union's high representative, Josep Borrell, has called for an immediate end to the violence in Israel and the Palestinian territories. EU foreign ministers will meet on Tuesday to discuss recent events.

Borrell said he was in contact with the members of the Middle East Quartet — the United Nations, the US, the EU and Russia — in an effort to deescalate the situation.

The European Union has not traditionally played the lead role in Middle East peace negotiations and has instead focused on humanitarian aid. The EU is the largest single donor to the Palestinian Authority. Through its humanitarian aid department, the European Commission has sent a total of €700 million ($850.65 million) in humanitarian aid to the Gaza Strip and the West Bank since 2000.

"The US is playing an active part," Norbert Röttgen, the chairman of the Bundestag's foreign policy committee, told the public broadcaster Deutschlandfunk on Friday. "They immediately dispatched the State Department representative on this issue." He said the EU played practically no role and could mainly contribute by continuing to provide humanitarian aid.

Intelligence services in Egypt, which borders Israel to the west, still have good connections to Hamas. Over the weekend Egypt played a part in a mediation effort along with the UN and Qatar to negotiate a two-hour ceasefire to allow fuel to be transported to Gaza's only power facility. The effort failed after Israel struck the home of Hamas chief Yahya Sinwar.

On Wednesday an Egyptian delegation met with Islamic Palestinian groups in Gaza before going to Tel Aviv on Thursday. Israeli leaders have so far declined a ceasefire agreement, according to Egypt's government.

On Sunday Netanyahu seemed to confirm that he was not seeking an immediate ceasefire. "We're trying to degrade Hamas' terrorist abilities and to degrade their will to do this again," he told the US broadcaster CBS. "So it will take some time. I hope it won't take long but it's not immediate," he said.