Israel-Gaza ceasefire a relief for residents within rockets′ reach | Middle East| News and analysis of events in the Arab world | DW | 14.11.2019

Israel-Gaza ceasefire a relief for residents within rockets' reach 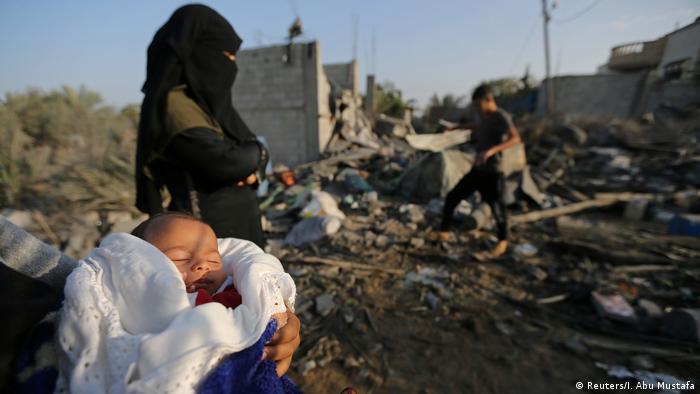 Lotem Ovadya has been working underground at Barzilai Medical Center in the coastal city of Ashkelon in southern Israel for the past two days.

"We moved everything to the shelter, from the fourth floor to minus 2. There are rockets all the time, and there were a few hits around us on different buildings, so we have no choice. We just have to stay here until this war stops," the nurse says.

Every time an escalation erupts between Israel and Gaza, the hospital's upper floors are evacuated and moved to safer wards underground. Ashkelon is within reach of shorter-range rockets fired from the enclave, which is just a 15-minute drive away.

"It's stressful; I am taking care of people here while I am also worried about my children at home, because we don't have a safe room in the house," says Ovadya, who commutes every day from a nearby moshav, or village, which is also subject to rocket fire.

Anatoli Ashutosh is sitting in the hospital cafeteria when a warning siren starts blaring, alerting people to incoming rockets. He quickly moves from the courtyard to a protected area inside. In Ashkelon, people are advised to take shelter within 30 seconds of an alarm — that's how long it takes a rocket launched from Gaza to hit the town.

"You don't get used to it," says Ashutosh, whose first son was just born at the hospital. He lives in the nearby town of Sderot, which has faced an almost constant barrage of rockets since Tuesday morning. "It's very stressful because you never know when it is going to hit, whether it is before or after the alarm. I always run to an area that is a bit more protected like here," he says, pointing to the sign on a concrete wall that reads "partially protected area." 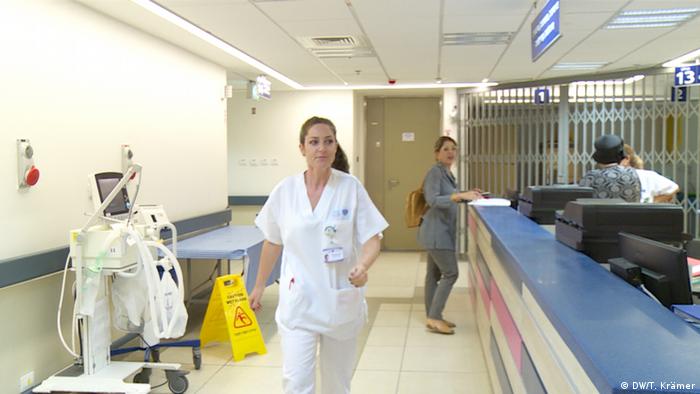 A mere 20 kilometers (13 miles) away in Gaza City, but in a completely different world, Ayman Mghamis is preoccupied with keeping his family safe. There are no shelters in Gaza for the civilian population. The young father was moving to a new apartment with his family when the latest hostilities started.

"What terrifies me is the feeling of my kids and my family, with bombing here and there around us, and how I can keep them safe," the father of three young children says on the phone from Gaza City. "I keep on playing with them all day so they forget about the sounds of bombing they hear from time to time." In 2009, during the first Gaza war, he lost his father when an Israeli airstrike hit the family apartment. After three wars between Hamas-ruled Gaza and Israel over the past 10 years, and numerous brief military escalations, the prospect of yet another round of fighting is unbearable to residents in the territory.

New round of fighting after targeted killing

The latest escalation began in the early morning hours on Tuesday, when Israel assassinated a commander of the militant Islamic Jihad group. Bahaa Abu el-Atta was killed together with his wife in an aerial strike on an apartment in Gaza City. Israel's prime minister, Benjamin Netanyahu, described him as a "ticking time bomb" and said that Abu el-Atta had been behind recent rocket fire toward Israel and posed an imminent threat to the country. Leaders of Islamic Jihad vowed fierce retaliation to avenge Abu el-Atta's death. Over the course of Tuesday, hundreds of rockets were fired toward southern Israel, reaching as far as Tel Aviv. Schools, businesses and railroads were shut down. In exchange, Israel repeatedly bombarded several locations in the Gaza Strip.

Contrary to Netanyahu's explanation for the targeted killing, some Israeli commentators drew attention to the timing of the operation, which they associated with the political deadlock in Israel. After two inconclusive elections this year, Netanyahu has failed to form a coalition that can govern the country. His rival, Benny Gantz, a former army chief of staff, now has less than a week left to bring one together.

End to months of relative quiet

The exchange of fire this week put an end to several months of relative quiet. On several occasions, Egypt had mediated an unofficial truce, under the understanding of "calm for calm." Hamas and Israel appeared to have upheld the fragile status quo.

In the past, Israel had blamed Hamas for any attacks that came out of Gaza and directed retaliation against it. This time, the Israeli military consistently blamed Islamic Jihad instead and stated that it was focusing its strikes on it. Security officials in Israel estimated that, while Hamas would state its support for the group, it would not actively take part in the fighting. So far there has indeed been no indication that Hamas took part.

By Wednesday night, rocket fire from Gaza militants and Israeli airstrikes had again intensified. At the same time, reports from Egypt suggested that efforts were intensifying to reach a new truce by early Thursday. 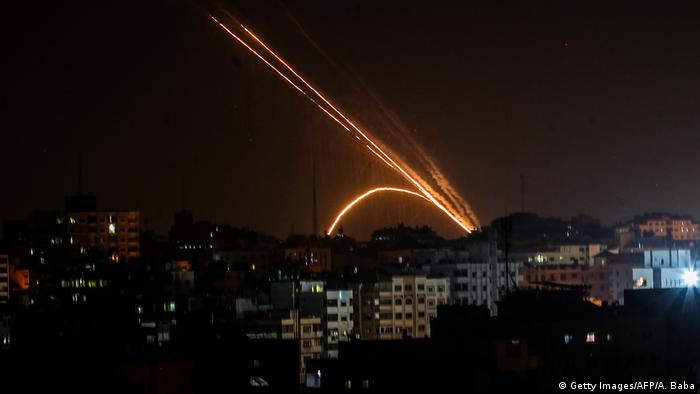 "This madness needs to end," wrote Ayman Mghamis on WhatsApp from Gaza, exhausted from having barely slept in the past two days. But it will only ever end if there is a long-term political solution that addresses the underlying causes, he adds.

This sentiment is echoed in southern Israel. "It's a terrible feeling, we don't have a routine for that, but every few months there are rockets, and then again, two months later it happens again," says Lotem Ovadya, the nurse from Ashkelon.

Even as the cease-fire went into effect, people on both sides believe the next military escalation is only a matter of time.

China: Xi visits Tibet for the first time as president