Israel's general election has put Prime Minister Netanyahu on track for a record fifth term in office, but not everybody is celebrating. The vote reflects a deep societal divide. Dana Regev reports from Haifa. 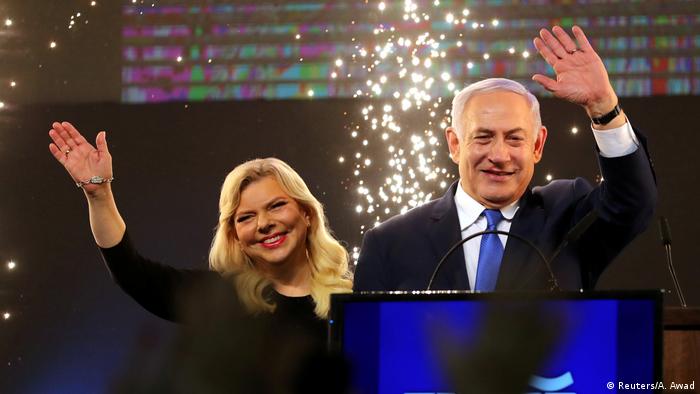 The day after Israel's general election, it's hard to say the country has woken up to the dawn of a new day. In the northern port city of Haifa — known for its mixed Arab-Jewish population and left-leaning tendencies — the warm sunshine is unable to mask the storm in its residents' hearts, as all signs point to a record fifth term in office for Prime Minister Benjamin Netanyahu.

Netanyahu couldn't have asked for a more promising outcome after a tight race between his ruling right-wing Likud Party and the centrist Blue and White alliance of former military commander-in-chief Benny Gantz.

Gantz, a rising star in the political arena, tied with Netanyahu, with each of their parties earning 35 seats. But almost all the smaller right-wing parties have said they would back Netanyahu to form a coalition. This right-wing bloc has a 10-seat lead, with 65 seats as opposed to the center-left's 55. Gantz conceded defeat Wednesday evening.

Before voting had finished, however, promising preliminary results for Gantz's party triggered panic on Likud's social media accounts, with Netanyahu's supporters launching an aggressive text message campaign meant to persuade undecided voters to head to the polls before they closed.

"A dramatic update on low turnout across the Likud's strongholds, we have to save the Right!" some of the text messages read. "If you don't want to end up with a left-wing government — get out and vote Likud now!" 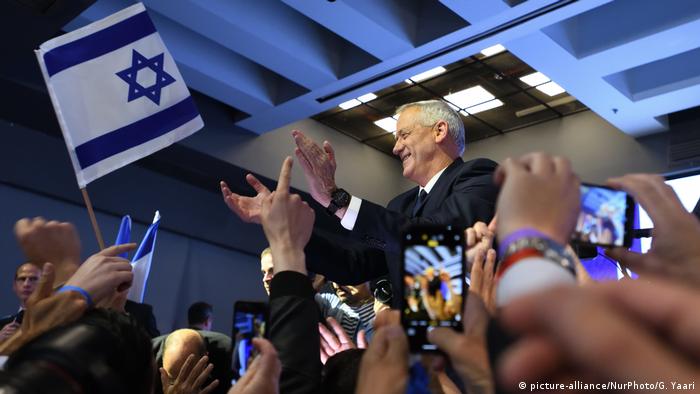 'A fight for my homeland'

And so the Israeli people have spoken — or the roughly six million who are eligible to vote, at least. Israeli Arabs can vote, though Palestinians cannot, and Israelis living overseas must vote in Israel.

In Haifa, not everybody feels victorious. Adi Hagin, 40, is an Israeli living in Frankfurt with her German husband and their two daughters. She flew to Israel for less than 48 hours just to cast her vote.

"It's not that I seriously expected any other result, but I felt like I have to fight for the future of my homeland – and I failed," she shares with DW. "I'm not sorry I flew here. I am, however, sorry that I couldn't change the Israeli reality." Adi Hagin, who lives in Frankfurt, Germany, had to fly back to Israel to vote in the 2019 election

Turnout was also exceptionally low among Arab voters. In Tuesday's vote, more than 50 percent of them stayed home.

Arabs make up roughly 20 percent of Israel's population. In 2015 the Arab parties merged to form the Joint List – which reaped 13 seats, the third highest of all the parties. But in early 2019 internal disagreements led to the dissolution of this united front, which eroded trust within its electorate. This was accompanied by rising racism by the Israeli mainstream.

More demoralizing than the collapse of the Joint List was Israel's 2018 Nation-State Bill, which specifies the nature of the State of Israel as the nation-state of the Jewish people. "This law has caused the Arab population to lose its last glimmer of hope to ever feel a sense of belonging to this country," says 23-year-old Suleiman Maswadeh, who, as a Palestinian living in Tel Aviv, doesn't have the right to vote.

"Even the so-called center-left parties stressed that they would not form a coalition with the Arabs, so you tell me, why vote for anyone when literally no one wants to see you in parliament?" 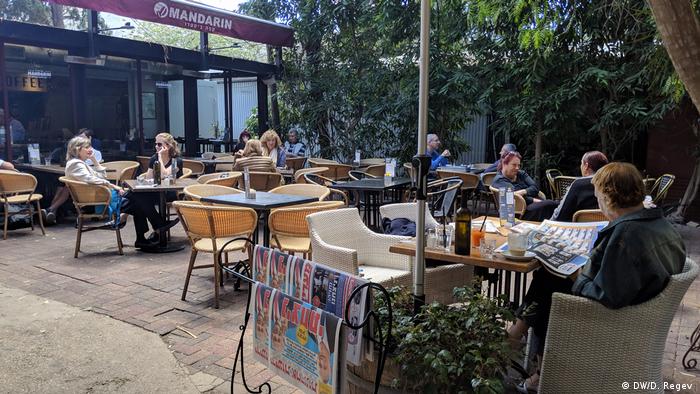 In this small cafe in Haifa, Israel's third-largest city, the results of the April 9 elections were the main topic of discussion

But although Netanyahu seems set to secure a fifth term in office with the support of right-wing parties, not all of them made it past the electoral threshold of 3.25 percent of the national vote. Such was the case for the New Right party led by outgoing ministers Naftali Bennett and Ayelet Shaked's, as well as the far-right Zehut party led by Moshe Feiglin.

"Even if we don't make it, it won't take long until there will be another election, and we will be there," Feiglin said early Wednesday morning, but the voters were not convinced. His pro-marijuana-legalization campaign was not able to obscure his party's messianic aspirations. 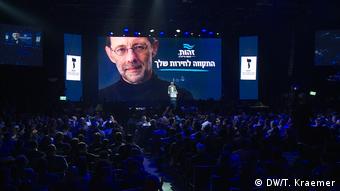 Feiglin tried to attract young supporters with his campaign call to legalize marijuana, but it wasn't enough to land seats in the parliament

"This man [Feiglin] is detached from reality," says 95-year-old Ruth, who preferred to be called only by her first name. Berlin-born Ruth has been living in Haifa almost her entire life.

"He thinks we [the Jews] should build the third temple in Jerusalem," the pensioner added. "This is not a sane politician." Ruth voted for left-wing Meretz party, and was disappointed to learn that they only got four seats in the Knesset.

"At least it's four seats more than Bennett," she laughs, referring to the nationalist New Right party. As of Wednesday afternoon, Bennett's party had earned 3.14 percent of votes. But with some 300,000 votes yet to be counted, including those of soldiers and diplomats, who tend to lean right, the party is likely to make it over the threshold.

"I'm trying to remain optimistic," Hagin says. "I hope that one day Israelis would choose better, and as a result, the faith of the Palestinians living in the occupied territories would improve, too," she summarizes with a sigh.

In the meantime, Netanyahu will have to form a coalition in the shadow of looming corruption indictments — though this didn't seem to influence his supporters.

"Only Bibi!" reads some graffiti in downtown Haifa, reminding passersby that at the end of the day, this is what the Israeli public is likely to get — again.

Netanyahu's Likud and right-wing allies appeared to have beaten a bloc of parties on the left. The unofficial results mean Netanyahu will likely be able to form a coalition. (10.04.2019)

It looks set to be a tight race between Benjamin Netanyahu’s ruling Likud and the centrist Kahol Lavan parties. But several small ultranationalist unions hold the key to forming a coalition. (05.04.2019)