Protesters rallying against Prime Minister Benjamin Netanyahu have clashed with police in Tel Aviv, according to local media. Dozens of people were arrested for violating controversial new curbs on large demonstrations. The rallies came days after the government passed a new law that limits protests to groups of 20 people, who must stay within one kilometer (0.6 miles) of their homes. Netanyahu said the measure was necessary to tackle a surge in coronavirus infections, but critics accuse him of using the lockdown to stifle dissent.

Demonstrators have been gathering outside Netanyahu's official residence in Jerusalem every weekend since June. They accuse him of mishandling of the pandemic and say he should not stay in office while he is on trial for corruption. 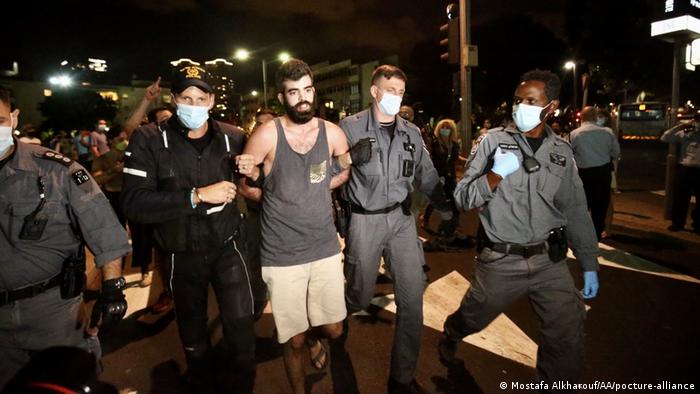 According to rally organizers, more than 100,000 people took part in hundreds of protests across the country on Saturday evening. About 200 demonstrators turned out in front of Netanyahu's residence, according to local media. Many people also gathered in their town centers, in line with the new protest rules.

One of the larger rallies took place in Tel Aviv, where hundreds of people gathered in Habima Square, chanting anti-government slogans and waving posters with messages such as, "Dictatorship sponsored by corona."

Local media reported that clashes broke out between police and protesters after officers warned the crowd they were breaching social distancing restrictions. Police said they had issued fines to hundreds of people for alleged violations.

The Haaretz newspaper said 37 of the 38 people detained were released early Sunday, while one person suspected of injuring a police officer remained in custody. Israeli media also reported attacks on protesters in a number of cities by activists opposing the demonstrations.

Israel's coronavirus outbreak is one of the worst in the world on a per capita basis. Since the start of the pandemic, more than 250,000 people have been infected and more than 1,600 have died in the country of 9 million. Israel imposed a lockdown in March but lifted the measure in May after a drop in cases. A spike in infections sent the country into its second lockdown in mid-September.