Open-air markets and all non-essential businesses will close as infections in the country soar. But a move to restrict prayers and protests could face a backlash ahead of the Yom Kippur holiday. 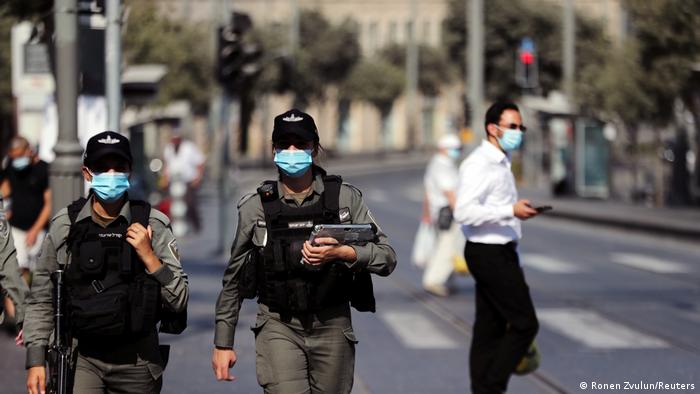 The Israeli cabinet voted to close all non-essential businesses and restrict demonstrations and prayers on Thursday amid soaring coronavirus case numbers.

Prime Minister Benjamin Netanyahu warned that the virus was driving the country towards "the edge of an abyss."

Israel entered its second lockdown on September 18, but cases continued to rise reaching a daily level of almost 7,000 new infections. The country is among the worst-hit on a per-capita basis anywhere in the world.

Prayers and protests will be limited to no more than 20 people and must be held outside, while those attending may not travel further than one kilometer (0.6 miles) from their homes.

The new rules come into effect on Friday as the country shuts down for the weekly Sabbath ahead of the Yom Kippur holiday on Sunday and Monday.

All workplaces and businesses not considered essential have to shut down for two weeks.

Strong criticism from all sides

The announcement faced backlash from Finance Minister Israel Katz and Bank of Israel Governor Amir Yaron. He pointed to the potentially disastrous effects of the further lockdown, the cost of which has been estimated to reach 35 billion shekels (€9.1 billion, $10.6 billion).

The country's ultra-orthodox community, including religious parties in the ruling coalition, fiercely opposed limiting access to Synagogues, especially around Yom Kippur, the Jewish Day of Atonement.

Anti-government protesters also accused Netanyahu of introducing the new rules in order to hamper public criticism of him and the government.

Netanyahu has been involved in an on-going trial regarding charges of bribery, fraud and breach of trust. Thousands of protesters have been gathering every week outside his Jerusalem home in order to voice their opposition.

Only 27% of Israelis support the prime minister's handling of the coronavirus pandemic, according to a survey published by the nonpartisan Israel Democracy Institute on Wednesday.

Protesters in Israel call on PM Netanyahu to resign

Setbacks after a promising start

Israel's initial response to the outbreak garnered praise for its speed and effectiveness. The lockdown brought daily new cases down to double digits in May, but the quick reopening of the economy led to a surge of infections over the summer.

Since the outbreak began over 200,000 people have reportedly been infected and 1,335 people have died. On Thursday the country was reporting over 50,000 active cases.

In a country of 9 million people, these numbers proved a significant strain on the resources of some hospitals.