For some, it's almost a deja-vu that is reminiscent of the lockdown imposed during the Passover holiday last April. Now, the country has entered nationwide curfew for the second time.

"I have to leave my mother who is 90 years old alone. We won't go to her place for the New Year. She will stay with her caretaker and we will stay home", says shopper Yael Turgeman, referring to the eve of Rosh Hashana, the Jewish New Year, which is usually celebrated with family and friends.

"It's disappointing, that it just came back all over again after the last lockdown. Nothing is certain. And it's hard to believe this will help in the end."

The decision to reinstate a nationwide lockdown has divided the government and the nation. The new rules will restrict citizens within a radius of 1 kilometer (0.6 miles) from their homes. The long list of restrictions and exemptions was published on Thursday. 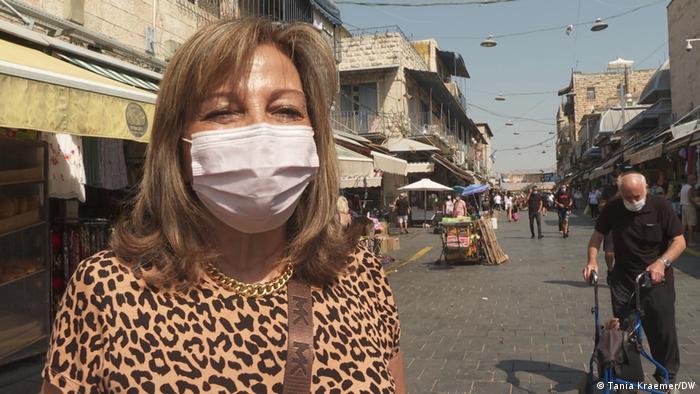 Yael Turgeman is not convinced another lockdown will help

"The situation in this country is absurd. There is no trust in this decision for a new lockdown", says Anat Dreamer, an actress who has not worked properly since the start of the pandemic. "A lot of people are enraged and there is a sense of confusion. It was not well prepared, there was no exit strategy from the last lockdown and now we enter another cycle of horror."

"I don't know when we go back to work and if anyone will take care of us. I feel a lot of things are done because of religious and political pressure." 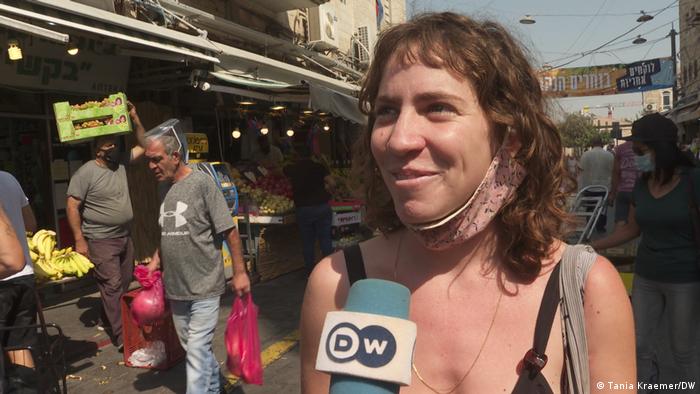 Anat Dreamer says the situation in the country is 'absurd'

Economic fallout from the first lockdown

Israel has not yet recovered from a deep economic crisis as a result of the first lockdown in March and April. At that time, Israel's Prime Minister Benjamin Netanyahu was widely praised for his handling of the crisis and for managing to curb the spread of the coronavirus.

His government has been criticized ever since — not only for opening the economy too quickly, but also for not supporting businesses and citizens enough to cope with the fallout.

For three months, large weekly protests have been held near Netanyahu's residence in Jerusalem, over the government's perceived failure to handle the pandemic and his corruption charges. The battle against the novel coronavirus looks like a "disheartening failure", wrote the Ha'aretz newspaper analyst Amos Harel. To blame for this, Harel wrote, were "a lethal combination of bad management, chaos, arrogance, zero personal example by the leadership and insufficient cooperation by the citizenry." Even when Netanyahu remains under fire for his trial for corruption charges, he managed to score some positive headlines with Israelis as they prepared for the new lockdown on his short visit to Washington this week to sign normalization agreements with the United Arab Emirates and Bahrain. It was widely acknowledged as historic.

A country of roughly nine million, Israel now has one of the highest infection rates per capita worldwide. But, while cases kept soaring in recent weeks, politicians, health officials and ultra-orthodox leaders could only agree on localized night-time curfews in cities and neighborhoods with high infection rates.

The zigzagging decision-making and yielding to different interest groups have left citizens reeling. Leading up to the holiday, President Reuven Rivlin acknowledged that Israel's leadership had disappointed its citizens. "I understand the feelings of confusion and uncertainty, the anxiety that many people are feeling. I understand and first and foremost want to apologize for that," Rivlin said.

Hospital staff pushed to the limit

On Tuesday infections rose to an all-time high of over 5,500, but receded slightly since. As of Friday morning, 1169 people had died of COVID-19 in Israel, and the number of patients in a serious condition was rising. The mortality rate however has remained relatively low. At least two hospitals sent patients to other medical centers to avoid overcrowding. However, no shortage has been signaled in the overall hospital capacity to treat coronavirus patients.

At the Shamir Medical Center, one of Israel's largest hospitals near Tel Aviv, doctors and nurses have been working nonstop since the crisis began. "The situation is severe. At the moment, every day we see more and more patients. Our coronavirus department is full, we have maybe room for one more patient, after that we have to open another department and that means we need to recruit more staff", says emergency physician Gal Pachys. It's the specialized staff that are needed the most to cope with the high number of patients. 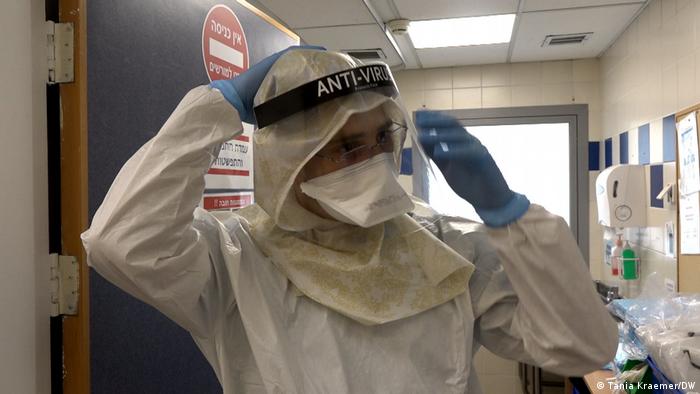 At the busy emergency room, the medical staff maintain a strict protocol to identify and separate suspected COVID-19 patients. Israeli soldiers come and go to deliver coronavirus test samples to the lab.

A small area in the ward with isolation rooms is kept off limits. There, patients are monitored via video-link until coronavirus test results are back. Several times a day, Pachys has to change into the full protection gear to treat patients. The team has dealt with terror attacks and war situations. "Corona is something that is [largely] unknown and we are learning day by day how to manage the patients better", he says.

A new annex is currently being built next to the emergency room to prepare more space for incoming suspected coronavirus patients. "People still don't understand the severity of the disease", says Pachys, the emergency physician. "Some people think they are protected, that it [coronavirus] is nothing. But really it is not nothing."

The lockdown is expected to last for at least three weeks, but could be extended further.