The bill, passed by the Israeli parliament after a 46-38 vote, allows the government to impose a state of emergency that curbs citizens' right to protest. The move has been slammed by critics as anti-democratic. 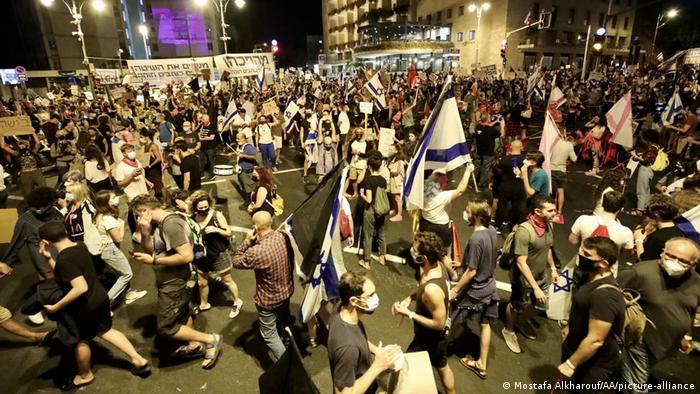 Israel's parliament voted early Wednesday morning in favor of significant restrictions on protests as part of a strict nationwide lockdown in the wake of rising coronavirus infections.

The bill, which was approved by lawmakers after a 46-38 vote, allows the government to declare a week-long state of emergency if the coronavirus spreads out of control. If such a state is called, the government would be able to confine demonstrators to a 1-kilometer (0.6 mile) radius of their own homes.

On the eve of the vote hundreds of Israelis protested against the proposed measure. Residents blocked streets surrounding the Knesset, Israel's parliament, as many more demonstrated in a square outside the building while lawmakers debated whether the weekly protests against Prime Minister Benjamin Netanyahu should be allowed to continue despite the lockdown.

Indeed, last week citizens vented their displeasure at the possible measure to stymie protests by gathering outside the official residence of Netanyahu in Jerusalem, calling for the long-time leader's resignation. Many were brandishing placards such as "disgrace" or "ashamed," while another was emblazoned with the words "Thou Shalt Not Steal," in reference to accusations of fraud, breach of trust and accepting bribes. He has denied any wrongdoing, accusing the media and law enforcement of an orchestrated "witch hunt" against him.

Israel implemented an intense, second lockdown earlier this month with open-air markets and all nonessential businesses closing as infections in the country soared.

Ecuador's president has declared a state of emergency in three provinces, including capital Quito, in response to protests by Indigenous people over fuel prices.

Black flags have been raised across the country as millions of workers go out on strike in Sri Lanka. President Gotabaya Rajapaksa responded by giving the military greater powers.