The tunnel was near the site of recent demonstrations that have left dozens of Palestinians dead and hundreds wounded. Israel has also undertaken a broader long-term project to combat tunnels dug from Gaza. 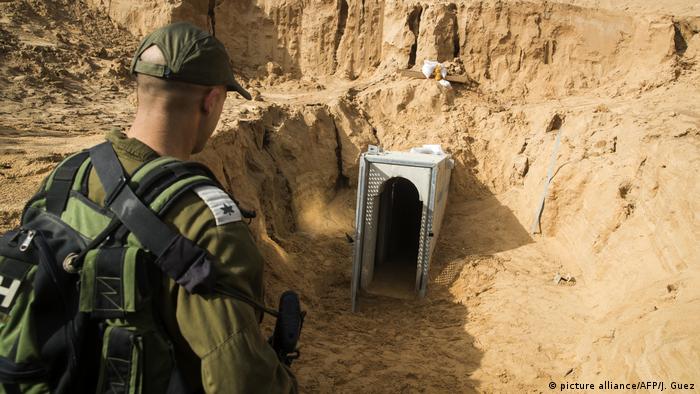 The Israeli army on Sunday destroyed a tunnel built by Hamas militants that crossed from the Palestianian-administrated Gaza Strip into Israeli territory.

The new tunnel was connected to an existing network that was dug in the northern Gaza Strip and entered Israel near the Nahal Oz community, according to military spokesman Lieutenant Colonel Jonathan Conricus.

It is the fifth such tunnel Israeli forces have destroyed in as many months.

"We filled the tunnel with material that renders it useless for a very long period of time," Conricus said. He did not elaborate other than to say that explosives were not used.

"According to our early assessments, this tunnel reaches kilometers (miles), several kilometers, into the Gaza Strip," he added.

The tunnel was near the site of recent Palestinian demonstrations against Israel. Two weeks of protests have left 28 Palestinians dead, including one journalist, and more than 1,500 wounded by Israeli fire.

The demonstrations have been partly organized by Hamas, which rules the Gaza Strip. But large numbers of ordinary Gazans have also been turning out for the weekly protests along the border to demonstrate against harsh living conditions in the Strip that they see as being caused by Israel's crippling border closure in 2007.

Israel has come under fire from the international community for its use of deadly force against the demonstrators. Israel has defended its actions, claiming that the protests are a cover for Hamas militants to launch attacks. The European Union has called for an investigation.

Stopping the tunnel threat has been a high priority for Israel since the 2014 war, when Israel realized that Hamas had infiltrated its territory via tunnels. At the time, the infiltrations caught Israel off guard.

Although the tunnels did not reach civilian areas, some local populations were nonetheless terrified. The tunnels enabled a series of attacks against Israeli troops, with one such assault resulting in the killing of five soldiers.

Israel's Defense Minister Avigdor Lieberman said the tunnel destroyed on Sunday was the longest and deepest Israel has discovered so far.

"It's a tunnel that cost millions of dollars to dig, money that instead of going to ease the hardship of Gaza's residents has sunk in the sand," he said. "Residents of Gaza: Hamas is burning your money on tunnels to nowhere."

Hamas did not immediately respond to a request for comment.

Israel is also building an underground barrier to detect and block future tunnels that Hamas may seek to build. Israel claims the barrier, in conjunction with new technological developments, will render Hamas' tunnel project impotent.

The bitter enemies — Israel and Hamas — have fought three wars since 2008. During the 2014 conflict Israel destroyed 32 tunnels.