At least one Palestinian was killed by Israeli fire in a protest at the Gaza-Israel border. Thousands gathered for a third consecutive week to protest for the right to return to lands their families lost in the 1948 war.

Over 950 Palestinians were wounded on Friday — including 223 who were hurt by live ammunition — while the rest were wounded by tear gas, rubber-coated steel pellets or shrapnel, health officials said. They added that a Gaza journalist was in serious condition after sustaining a bullet wound to his abdomen.

Clashes erupted at several spots as small groups of Palestinian protesters threw stones at Israeli border guards who fired back with tear gas. 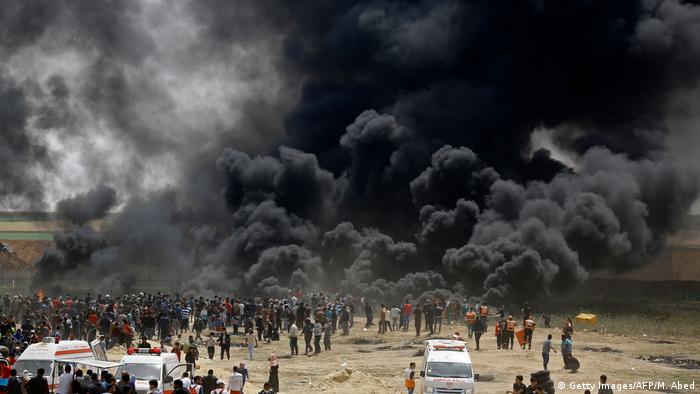 Palestinians burn tires at the border fence with Israel, east of Jabalia

Israel's army estimated that around 10,000 Palestinians took part in Friday's protest on the border, the third in a series of mass protests. Organizers encouraged people to walk on a large Israeli flag which had been placed on the ground.

One of the protesters, Sumaya Abu Awad, attended with her three daughters and son: "I am from the village of Hiribya and it is my right to return to it," she told the news agency AFP. "I am not afraid of death because there is no life in Gaza."

Since the protests began on March 30, 34 Palestinians have been killed by Israeli forces firing live ammunition at the demonstrators on the other side of the border. 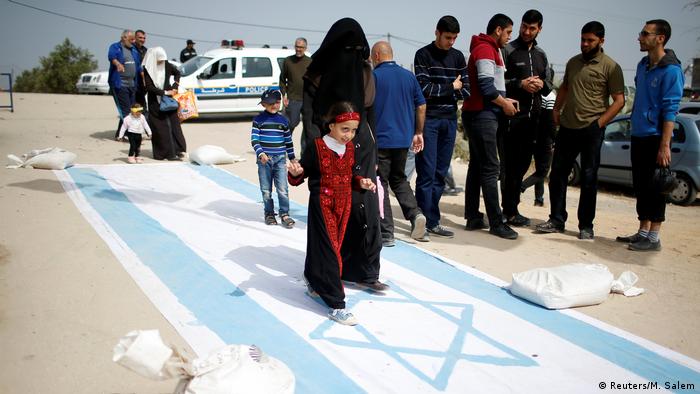 Palestinian organizers have called the series of protests the "Great March of Return" beginning on Land Day, March 30, and continuing until May 15, the 70th anniversary of the 'Nakba' - or the 'catastrophe' - when 750,000 Palestinians were forced out of their homes and off their land by Israeli forces in 1948.

For Israelis, 1948 marks the year of the creation of their state.

Land Day is named for the 1976 Arab protests in response to the Israeli plans to expropriate land. It is marked each year by Palestinians around the world.

Israel has accused Hamas, which governs Gaza, of using the protests as a pretext for violence. The group has been designated a terrorist organization by Israel, the European Union and US.

Read more:Intifadas: What you need to know 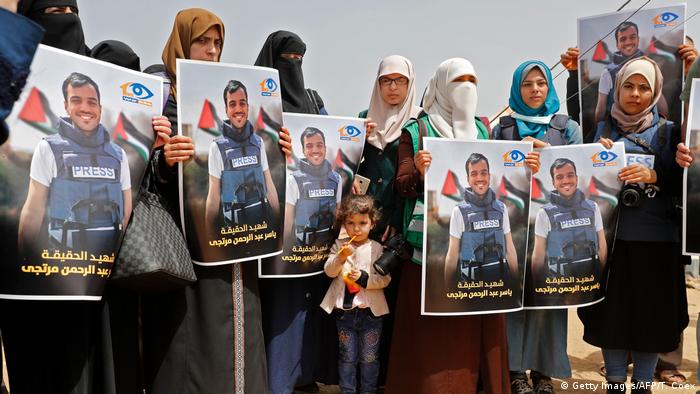 Palestinians hold posters of Yasser Murtaja, the journalist who was killed by Israeli fire at last week's protest

UN Secretary-General Antonio Guterres and the EU have called for an independent investigation into the violence. US Congressman Mark Pocan and four other Democrats issued a statement calling for a nonviolent protest and urged Israeli soldiers to refrain from shooting live ammunition at unarmed Palestinian protesters from hundreds of meters away, across the fence separating the two territories.

"We strongly reject the dangerous contention made on April 8 by Israeli Defense Minister Avigdor Lieberman that 'there are no innocent people in the Gaza Strip,'" the statement went on. "Media reports suggest that on Friday, Israeli soldiers will once again be ordered by high command — in contravention of international law — to engage in sniper fire on Gaza residents who come within 300 meters of the border fence or engage in other non-life-threatening actions."

The new US Embassy is due to be opened in Jerusalem on May 14. The move from Tel Aviv has angered Palestinians who regard the eastern sector of Jerusalem — which Israel annexed — as the capital of a future Palestine state.

Gaza has been under an Israeli blockade for a decade and unemployment is approaching 50 percent. Electricity is available for only five hours a day.

The border with Egypt has regularly been closed. However, Egypt opened the border on Thursday and it is due to stay open over the weekend.

A video making the rounds online appears to show Israeli soldiers celebrating after shooting a Palestinian man. Israel's defense minister has lauded the shooter, but said the soldier who took the film should be demoted. (10.04.2018)

The origin of conflicts in the region could be dated back centuries but this year has seen some key events leading to an escalation in the tension between Israel and Palestinians in Gaza. (13.04.2018)