Israeli Defense Minister Avigdor Lieberman has rejected international criticism of Israel's use of deadly force. There are mounting questions surrounding Israel's use of live fire against stone-throwing protesters. 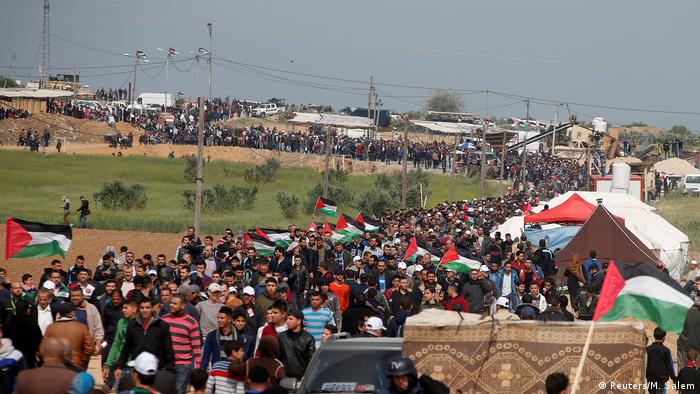 "There are no innocent people in the Gaza Strip," Lieberman told Israel's public radio. "Everyone's connected to Hamas, everyone gets a salary from Hamas, and all the activists trying to challenge us and breach the border are Hamas military wing activists."

There are growing questions surrounding Israel's use of lethal force after ten days of protests left 30 Palestinians dead along the Gaza-Israeli border. There are no known Israeli casualties.

On Saturday the EU called for restraint and questioned whether the Israeli Defense Forces (IDF) engaged in "proportionate use of force."

The death toll rose had risen on Friday after the IDF opened fire on thousands of protesters, killing nine Palestinians, including a journalist who was wearing a flak jacket with the word "press" on it. Nearly 500 more people were injured.

On March 30 the IDF killed 19 Palestinians as tens of thousands protested the Israeli occupation.

Israel maintains that the deadly force is necessary to prevent damage to the border wall, to stop attempted attacks and infiltrations.

Israel accuses Hamas — the Islamist movement that governs the Gaza Strip and with whom they have fought three wars since 2008 — of using the protests as cover to carry out violence.

But human rights groups have slammed the deadly response from Israeli soldiers. Palestinians say protesters are being shot without posing any threat to Israeli forces.

"What we are talking about here is hypocrisy, it's all interests," Lieberman said referring to the international community on Sunday.

"We have seen tens of cases where Hamas people dress as Red Crescent personnel, as journalists, use ambulances, and a journalist that comes close to the border fence and uses a drone on army soldiers - we won't take any chances," he said during an interview on Israeli Radio.

The journalist killed Friday was 30-year-old Yasaar Murtaja. He worked for a local news organization, Ain Media. He was wearing a flak jacket clearly marked "press," when he was fatally shot, according to photos circulated in Palestinian media.

Murtaja was reportedly shot while filming along the Gaza border area as protesters burned tires and threw rocks at Israeli army positions.

Tens of thousands of Palestinians have joined a six-week long border protest that will conclude May 15, the day after Israeli independence day, which Palestinians refer to as the "Nakba" or catastrophe.