Israel 'closer than ever' to defeating Hamas, says minister

An Israeli official has said Israel doesn't want to start a war in Gaza, but admitted toppling Hamas was still "definitely an option." Israel has denied it agreed to a ceasefire with Hamas following last week's fighting. 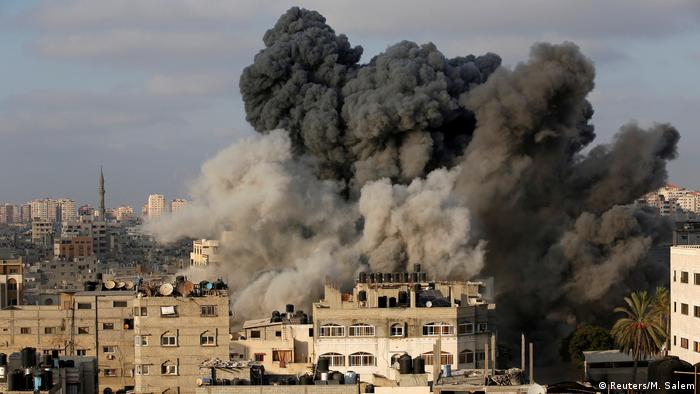 Israeli Energy Minister Yuval Steinitz told reporters Sunday that Israel was "closer than ever" to toppling Hamas in Gaza "if there is no other choice."

The remarks by Steinitz, who also sits on Israel's security cabinet, come on the back of two days of fierce cross-border violence between Hamas and Israel last week.

Toppling Hamas was still "definitely an option," the minister said, before adding that Israel was not interested in escalating the conflict into a full-scale war.

Gaza on the brink?

Tensions between the two sides have been mounting since March, when Palestinians in Gaza began staging regular protests near the border with Israel.

However, recent weeks have seen at least three major flare-ups. The most recent, on Thursday, saw Israel launch a series of airstrikes on Gaza after Hamas troops launched some 180 rockets and mortar rounds across the border the night before. Three Palestinians were killed by the Israeli strikes, including a mother and her 18-month-old daughter, while seven Israelis were wounded in the Palestinian rocket fire.

It marked the heaviest exchanges of fire between the two sides since 2014's Operation Protective Edge.

On Sunday, Israeli Prime Minister Benjamin Netanyahu spoke out for the first time about last week's deadly flare-up on the Gaza border, demanding a "total" ceasefire from Hamas' rulers.

"We are in the midst of a campaign against terror in Gaza," Netanyahu said at the start of a Cabinet meeting. "It will not end with one blow.

"Our demand is clear: a total ceasefire. We shall not be satisfied with less than that," he added.

Hardliners in Netanyahu's Cabinet have called on the prime minister to act more strongly against the latest Hamas' latest aggressions.

Little scope for a truce

The recent uptick in violence has seen UN officials and Egypt increase efforts to secure a truce deal between Israel and Hamas, albeit with little success so far.

Almost 170 Palestinian protestors have been killed by Israeli military fire during the protesters, while one Israeli soldier was killed by a Palestinian sniper, since clashes began on the border in March.

Hamas, considered a terrorist group by Israel and much of the West, has demanded the lifting of an 11-year blockade on Gaza imposed by Israel and Egypt.

Israel, meanwhile, has demanded Hamas and its followers stop launching incendiary projectiles across the border, burning swathes of Israeli territory.

On Sunday, Israeli daily Haaretz reported that officials in Jerusalem were formulating a plan to assassinate several senior Hamas leaders, although it would first wait to see the outcome of the upcoming negotiations brokered by Egypt and the UN before going ahead.

Portugal votes in presidential election amid coronavirus surge 6h ago