After an Israeli airstrike destroyed a tower in Gaza, Hamas militants responded by launching rockets towards Tel Aviv in the worst outbreak of violence between Israelis and Palestinians in several years. 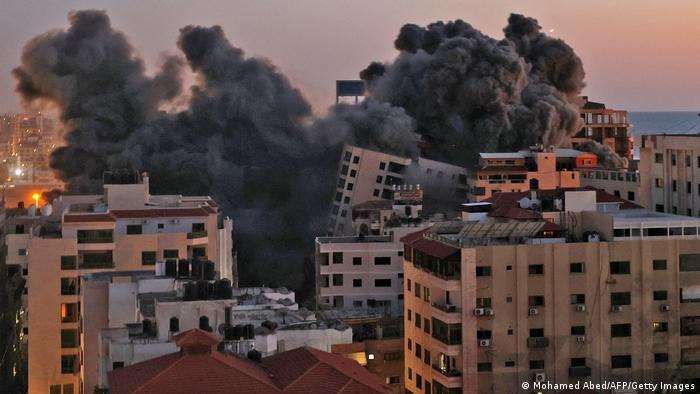 Violent clashes between the Israeli military and the Islamist group Hamas in Gaza continued on Tuesday following days of rising tensions in Jerusalem.

Some 130 rockets were fired by Hamas and the militant group "Islamic Jihad" towards Tel Aviv, killing one civilian. Two more civilians, including an Indian national, were killed in rocket fire in the southern city of Ashkelon after several missiles were able to get through Israel's "Iron Dome" aerial defense system.

Palestinian officials said that 32 people have been killed so far in the airstrikes, 10 of whom were children. An airstrike also flattened a 13-story office building in Gaza, which the Israeli Defense Force (IDF) has claimed housed top Hamas officials.

Despite international calls for an end to the violence, both sides have promised to keep responding to acts of aggression.

What have Israeli leaders said so far?

Israeli Prime Minister Benjamin Netanyahu and Defense Minister Benny Gantz gave a televised address on Tuesday. The prime minister warned that militants in Gaza will pay a "heavy price" for the rockets fired toward Tel Aviv.

He also said that the country was "at the height of a weighty campaign" and that operations in Gaza "will take time."

Gantz reaffirmed Netanyahu's comments, saying that the airstrikes that have killed dozens already are "just the beginning."

The UN envoy for the Middle East peace process, Tor Wennesland, warned that the situation was headed for a "full scale war."

International outcry against the violence continued on Tuesday, with world leaders condemning the rockets fired at Tel Aviv and calling for an end to the violence.

The UN Security Council said it would hold emergency consultations on Wednesday to address the escalating violence. Wennesland is expected to brief the 15 council members virtually at the closed meeting, which was called at the request of China, Tunisia and Norway. The Security Council has yet to issue a statement on the violence.

The US State Department said Tuesday that it wants to ensure any council statements  "don't escalate tensions.''

She added that the Biden administration "will also continue to support a two state solution to the Israeli Palestinian conflict."

Germany's Foreign Minister Heiko Maas has also defended Israel's response to Hamas, saying that: "Israel has the right to self-defense in this situation. The escalation of violence shall neither be tolerable or acceptable."

What has sparked the latest tensions?

Tuesday's violence followed days of protest in east Jerusalem over plans to evict several Palestinian families from their homes.

Tensions in the city — considered a holy site for Jews, Muslims and Christians alike — were further stoked as protesters and Israeli police clashed around the Al-Aqsa mosque on Sunday, one of the holiest nights during the Muslim holy month of Ramadan.

Hamas launched its first rockets on Monday after demanding that Israeli security forces leave the contested sites in the holy city.