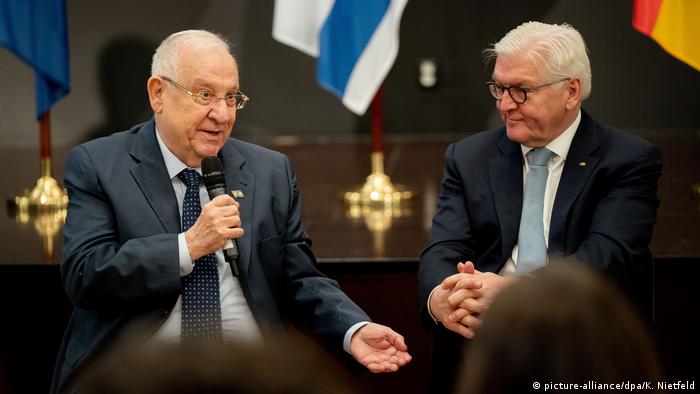 Rivlin told pupils at Berlin's Moses Mendelssohn Jewish high school on Tuesday that making connections between people all over the world was the "most important thing" to create an inclusive society. He also said that "unfortunately, politicians in our day [are] using hatred in order to gain political power," without elaborating.

"The most important thing is not to be afraid," Rivlin said, adding that he was moved to meet young German Jews.

His joint visit with Steinmeier followed their attendance at Monday's commemoration at Auschwitz-Birkenau on the 75th anniversary of the camp's liberation by Soviet troops on January 27, 1945.

Read more: Opinion — 75 years after Auschwitz Germany must do more to fight anti-Semitism

The school, named after the 18th century German-Jewish philosopher Moses Mendelssohn, currently has 441 pupils, 60% of whom are Jewish. Around 15% have nationalities other than German, some with roots in eastern Europe.

Between 1942 and 1945, Adolf Hitler's National Socialist [Nazi] regime had used some of the buildings at the site of the school as a camp to deport Berlin Jews into the Nazi death camp system.

Rivlin, introducing himself by his nickname "Ruvi," told pupils: "We now have the fourth, fifth and sixth generation after the Holocaust and the Second World War."

Ways must be found, Rivlin said, to inform young people and their children about what happened as the last survivors pass away.

Steinmeier, meanwhile, stressed the need to counter the often pernicious influence of social media, which had begun to compete with children's more typical education in school and at home.

"Information is not sufficient. Information must be combined with experience," Steinmeier said, suggesting that young people should consider visiting Israel, its Yad Vashem memorial or other memorials at former Nazi death camp sites to form their own impressions.

'We're not allowed to forget'

Referring to resurgent anti-Semitism worldwide, Rivlin said it had to be countered with all legal means combined with a large civic commitment to tackling racism.

Steinmeier asked pupils, aged between 15 and 17, about negative experiences they had encountered in the past. One girl spoke of anti-Semitic attacks on a friend of hers at a different school. Another dark-skinned female pupil told Rivlin that at her previous school, an elderly teacher had once said to her: "If Hitler were still alive, you would be dead."

Rivlin encouraged young people to wear the Star of David publicly, because "in a free world," everyone had the right of express oneself freely.

On Wednesday, Rivlin will address Germany's parliament, the Bundestag, in Hebrew at a ceremony to remember the 6 million victims of the Holocaust.

He has been described as a right-wing stalwart, but also as a defender of democratic values. Reuven Rivlin has been appointed as Israel's president, succeeding Shimon Peres. (24.07.2014)

Germany's top military intelligence agency has announced a 30% increase in suspected extremists within its ranks. Analysts say the figures indicate a deeper problem. (27.01.2020)