′Islamic State′ exploiting coronavirus and conflict to rise again | World | Breaking news and perspectives from around the globe | DW | 22.05.2020 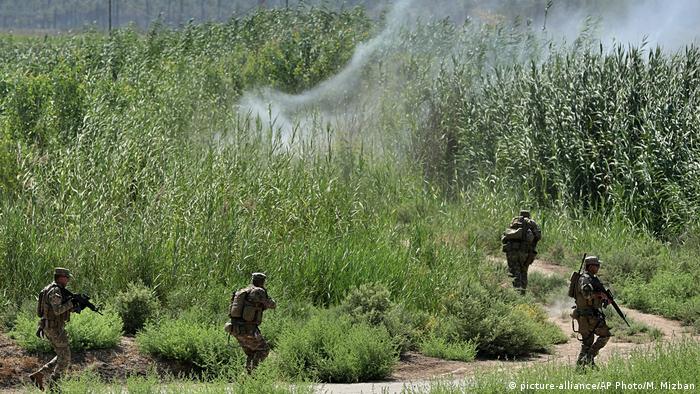 Northern Iraq is on fire again — thick columns of smoke have been seen rising over wheat fields. The terrorist militia known as the "Islamic State" (IS) set fire to them, to intimidate the local population, and the message is clear: This is what happens when you collaborate with state forces.

The militia's attacks have now been on the rise for several weeks. On April 28, a suicide bomber blew himself up at the Iraqi intelligence headquarters in the city of Kirkuk — part of a double blow, as on the previous night IS terrorists had been attacking nearby areas.

Then on May 1, several IS units launched a coordinated advance against members of the Iraqi state-supported Popular Mobilization Units (PMU) north of Baghdad. PMU fighters sent as reinforcements were subsequently killed by roadside bombs on the way to the battle.

These complex and coordinated attacks are indications of an "organization that is winning back real power," according to Sam Heller, advisor to the NGO Crisis Group. He says that IS itself has reported waging longer battles with Iraqi forces involving more complex operations, unlike the asymmetrical attacks of past years.

The power of being dead

Some 14 months ago, in March 2019, the Islamic State lost the last fragment of its "caliphate" after Syrian forces re-took Baghuz Fawqani in the east of the country. In October, US forces followed the development by killing the self-declared caliph himself, Abu Bakr al-Baghdadi.

But by January 20, 2020, a United Nations report was sending warnings to the UN Security Council that IS had begun to re-assert itself in both Iraq and Syria through increasingly bold attacks. The militia had, the report said, re-established itself as an underground network and been able to mount attacks in previously calm regions precisely because it no longer had any territory to defend.

"IS is still one of the stronger terrorist organizations in the world," terrorism analyst Guido Steinberg told DW. "In 2010, before IS began its big rise in 2013 and 2014, it had around 700 fighters available. Today IS has 2,000 to 3,000 fighters in Iraq and Syria each, and that shows the danger they pose."

Other estimates are even higher. In late January, US Special Envoy for the Global Coalition to Defeat IS James Jeffrey speculated that the militia had between 14,000 and 18,000 fighters in Syria and Iraq.

Even without its caliphate, the militia appears to be financially well-resourced. That was the conclusion of a report published earlier in May by the US Defense Department's Inspector General on Operation Inherent Resolve, the name given to the US military mission against IS.

The report quoted a US financial authority suggesting that IS has access to financial reserves of hundreds of millions of dollars, was continuing to generate income through criminal activities, and had no trouble transporting money into the region via couriers and other means.

The jihadists currently have two major allies: the new coronavirus, and the ongoing conflicts in the region. In March, IS called on its supporters to step up attacks specifically because governments around the world were now distracted by the struggle to contain COVID-19. The Syrian Democratic Forces (SDF), made up primarily of Kurdish militias, has halted its military operations. In Iraq, training programs for several forces, including those that the German military is involved in, have been put on ice.

And by the same token, IS has also begun to profit from other conflicts in the region, especially those between Turkey and the northern Syrian Kurds, as well as the general ongoing conflict between the US and Iran.

Tensions between the latter escalated massively in January this year with the assassination by drone in Baghdad of Iranian General Qassem Soleimani, who was, according SIPRI Director Dan Smith, "one of the biggest enemies of IS." That was followed by retaliatory missile attacks on US bases in Iraq, and has now led questions over whether US troops should be stationed there at all.

Since then, the US military has given up four bases in Iraq and is now stationed at just two locations, a fact that has become noticeable in the fight again IS, according to Steinberg: "Because the Americans are no longer joining Iraqi security forces in the field as much."

In Syria, too, the US is "now only represented by a few hundred men," Steinberg said. That worries him, because "the Americans pay particular attention to the foreign fighters who could be a danger outside Iraq and Syria."

That is also true of the 2,000 or so foreign IS fighters currently in SDF prisons in northern Syria. Before his death last year, IS leader Baghdadi said in a video message that freeing those prisoners was a top priority. Meanwhile, the security situation in those prisons, which are manned by Kurdish fighters, has been made much more difficult by the Turkish military invasion last October.

Hundreds of prisoners are thought to have escaped in the initial battles, and since Kurdish leaders have redeployed forces for the fight against Turkey, there are now fewer fighters available to guard those prisons. As a result, escape attempts and prison rebellions have been on the rise.

What the militia knows is this: IS might be everyone's enemy, but it is not everyone's most important enemy, and the militia has learned to profit from that.