The terror group says that the man who killed eight people and injured 12 is their "soldier." However, IS has been known to claim attacks to which it has no direct link, such as last year's deadly shooting in Orlando. 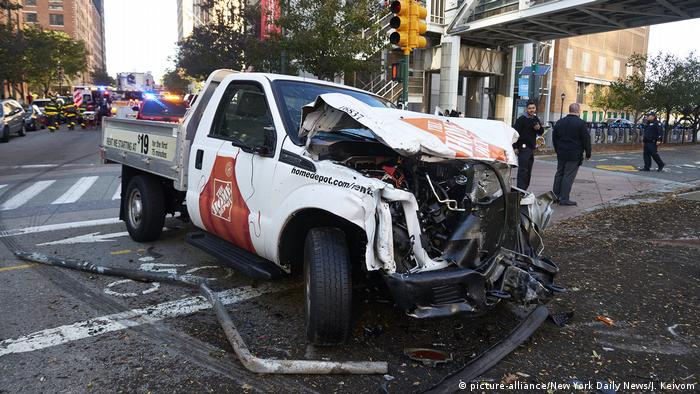 "Islamic State" (IS) terrorists said on Thursday that the man who killed eight people in a truck rampage was a "soldier" of their "caliphate." However, IS routinely makes similar claims with little to no evidence of direct involvement.

"One of the soldiers of the Islamic State attacked a number of crusaders on a street in New York City," said the group's al-Naba weekly newspaper, according to the SITE Intelligence Group.

The suspect, an immigrant from Uzbekistan, killed eight people and injured 12 others in Lower Manhattan on Tuesday when he plowed a rented truck into a bike path near the Hudson River. Most of his victims were tourists, including five Argentine men who had come to New York to celebrate their 30th graduation anniversary.

Whether or not the 29-year-old assailant was in direct contact with IS militants remains to be seen. The group has often taken credit for the actions of self-radicalized attackers, such as Omar Mateen — the man who killed 49 people at the Pulse nightclub in Orlando in June 2016.

The suspect in the attack was charged with terrorism offenses in federal court on Wednesday. He came to the US in 2010 and worked as an Uber driver before the attack. Acquaintances have told the press that he did not seem to be a particularly observant Muslim until recently.

The assailant told authorities that he became radicalized by watching IS propaganda videos online.

Islamist terror attacks in the US: Eric Rosand (Brookings Institution) speaks to DW

Security tight in New York in run-up to marathon