Scores of displaced people from the latest fighting in Syria's Deir el-Zour province have been killed in a car bombing. The blast follows the Syrian army's recapture of the last major city held by the jihadists. 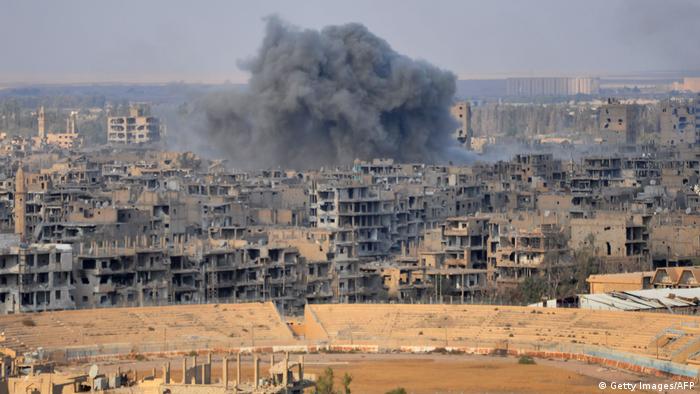 Saturday evening's blast struck refugees who had fled the fighting in the oil- and gas-rich Syrian province and who had gathered on the east bank of the Euphrates River, the Britain-based Syrian Observatory for Human Rights said.

At least 75 civilians were killed and some 140 others were injured, the monitor said. IS fighters detonated the car bomb at close range, the Observatory's director Rami Abdel Rahman told news agencies.

The blast happened in an area between the Conoco and Jafra energy fields controlled by the US-backed Syrian Democratic Forces (SDF) and close to the city of Deir el-Zour, which last week was captured by Syrian regime forces from the "Islamic State" (IS) armed group.

The largest city in eastern Syria, Deir el-Zour is a center for the country's oil extracting industry.

Save the Children estimates that 350,000 people have fled the recent fighting in Deir el-Zour.

"The situation in the city and surrounding countryside has been especially bleak, with civilians trapped between the fighting and all too often caught in the crossfire," explained Sonia Khush, the charity's Syria director. 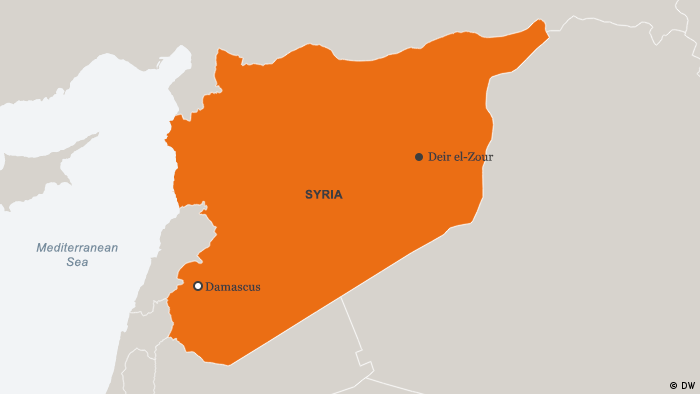 The Observatory, which gets its information from a network of Syria-based activists, said civilians were stranded on an island on the Euphrates directly facing Deir el-Zour and where some jihadist pockets remained.

IS is facing an onslaught by both Syrian government troops and the SDF alliance for the few remaining areas it controls in eastern Syria.

Having been driven from about 96 percent of territory they once captured in Syria and Iraq, the jihadists still control a small stretch inside the war-ravaged country and some desert regions along the Iraq-Syria border.

After taking full charge of Deir el-Zour city, the Syrian army said IS militants were now isolated and encircled in the countryside east of the city.

Syrian regime forces, backed by intensive Russian airstrikes, are now attempting to retake Abu Kamal, the last urban center controlled by the jihadi group in Syria, and close to the Iraqi border.

Last month, Syrian Kurd-led forces, allied with the US, captured Raqqa, once the de facto capital of IS' self-proclaimed caliphate in Syria.

Also on Saturday, reports suggested that US President Donald Trump and his Russian counterpart may discuss a settlement to the 6-year Syrian civil war in the next few days.

Russia's RIA news agency said the talks could take place on the sidelines of the Asian economic summit in Vietnam.

Washington and Moscow remain on opposing sides in the conflict and ties remain frosty over allegations of Russian interference in the 2016 US presidential election.

The "Islamic State" went on a killing spree for weeks in a town in Syria's central Homs province ahead of its retreat, according to a Syrian official. The killings raise fears of more revenge attacks as IS loses ground. (23.10.2017)

Russia's military campaign objectives "have been almost accomplished," according to an influential lawmaker. With talks gearing up, the UN's chief negotiator said the peace process had reached a "moment of truth." (30.10.2017)