The Afghan economy has collapsed and people are facing acute food shortages. Is it time for the international community to engage with the Taliban to ward off the humanitarian crisis in Afghanistan? 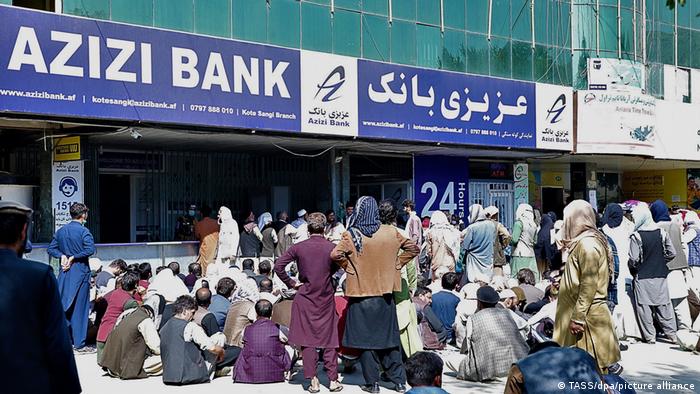 With the closure of banks, Afghans are unable to access their hard-earned savings

The international community faces a dilemma on how to deal with theAfghan Taliban, who seized power in August.

The United States, which ended its two-decade presence in the country last year, does not want to legitimize or strengthen the Islamic fundamentalist group. Washington froze Afghanistan's assets after the Taliban captured Kabul, and despite repeated requests by the country's rulers, there is no sign that the sanctions will be lifted.

Last week, the United Nations made the "biggest-ever appeal" for humanitarian aid for a single country, saying it needed $4.4 billion (€3.9 billion) for Afghanistan to prevent the "world's most rapidly growing humanitarian crisis" from deteriorating further.

But aid alone would probably not be enough to help Afghans, who are facing acute hunger combined with a severe drought and the coronavirus pandemic. Millions of Afghans are currently jobless, and their bank accounts are frozen.

Many Afghans are selling possessions to buy food, and urban communities are facing food insecurity on levels similar to rural areas for the first time.

About 8.7 million people are "one step away from starvation," Mary-Ellen McGroarty, head of the World Food Programme in Afghanistan, said in October.

Salahuddin Ludin, a political expert in Afghanistan, told DW that life has become "extremely difficult" for most Afghans. "International aid organizations have left the country. The Taliban are unable to pay the wages to government employees. The public health care sector is in a disarray," he pointed out.

Lal Gul Lal, former head of Afghanistan's Human Rights Organization, said the country was facing a humanitarian crisis long before the Taliban came to power and the situation had deteriorated further in the past few months.

Apart from the suffering of the rural population, even Afghans based in cities are finding it impossible to make ends meet.

The international financial sanctions will hurt the Taliban to an extent, but they have had a terrible impact on common Afghans, Lal said.

Ludin said many Afghans had put their savings in bank accounts. "Now, they cannot access them. Afghan businessmen, for instance, cannot make international transfers, which has resulted in high commodity prices in the country," he said.

'It is imperative to engage with this new government': Taliban spokesman in exclusive DW interview

To engage or not to engage with the Taliban?

Ludin believes that the international community needs to engage with the Taliban.

"The US should first recognize the Taliban as Afghanistan's rulers and then unfreeze bank assets. That way it can hold the Taliban accountable," he said, adding that if the US were to give financial concessions to the group without engaging with it, the money would end up in the Taliban's coffers.

Lal is also of the view that the US needs to unfreeze the assets to lift Afghans out of the humanitarian crisis. "But the money should only be released under strict conditions, one of which is that the Taliban don't have direct access to it," Lal said.

Torek Farhadi, a former Afghan government adviser, said the release of about $9.5 billion would bring liquidity to the Afghan market. "The process must be audited by the United Nations so that the money does not go to the Taliban. It could be used to pay salaries to government employees, but it must be ensured that it does not go to Taliban fighters," he said.

It is not just poor people who have been affected by the economic turmoil in Afghanistan. Even much of the country's middle class are now fighting poverty as the Afghan economy teeters.

Sharifa, who asked not to be named for fear of reprisals, previously worked for the Women's Affairs Ministry. She said she was now not only unemployed but also feared retribution from the Taliban.

"I have been unemployed for months. I have sold all my household items and bought food items with the income," said the mother of two.

Ajmal (name changed), who also used to work for a government agency in the capital, Kabul, told DW that many former government officials are struggling to make ends meet. "These former officials are unfortunately begging now, and some others have turned to daily-wage labor," he said.

Afghanistan is also facing a drought, which is forcing rural families to sell everything, including their own children.

Mohammad Ibrahim, a resident of Kabul, told DW that he had no other option than to offer his 7-year-old daughter, Jamila, for the debt his family owed. "A person came and told me to either pay the debt or 'I will burn your home to ashes,'" Ibrahim said. But he was offered the chance to "give up his daughter," in order to pay his debt.