The situation in Afghanistan, which has been in turmoil since the Taliban takeover, is deteriorating even further as the country suffers a drought, forcing families to sell everything, including their own children. 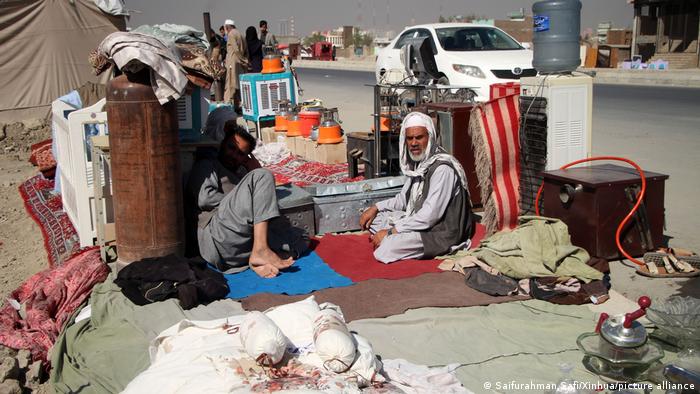 With an already ailing economy that has been hard hit by a prolonged drought and with the Taliban at the helm, Afghanistan's future is looking bleak.

Still seeking international recognition after seizing power in mid-August, the Taliban is struggling to grasp Afghanistan's deteriorating situation — and it is the poor who are paying the highest price.

"The COVID-19 pandemic, the ongoing food crisis and the onset of winter have further exacerbated the situation for families," according to a recently published report by UNICEF, the United Nations agency responsible for providing humanitarian and developmental aid to children worldwide. "In 2020, almost half of Afghanistan's population was so poor that they lacked necessities such as basic nutrition or clean water." And this is before the recent upheaval.

Mohammad Ibrahim, a resident of Kabul, told DW that he had no other option than to offer his 7-year-old daughter, Jamila, for the debt his family owed. "A person came and told me to either pay the debt or 'I will burn your home to ashes,'" Ibrahim said. But he was offered the chance to "give up his daughter," in order to pay his debt.

Millions of Afghans in urgent need of aid as famine looms

UN: Over half of Afghanistan in poverty

The UN's World Food Program (WFP) estimates that over half of Afghanistan's population lives below the poverty line, and food insecurity is on the rise, largely because of conflict and insecurity cutting off whole communities. The WFP says that an estimated 22.8 million people out of Afghanistan's near 35 million population are identified as acutely food insecure, including hundreds of thousands who have been displaced by conflict since the beginning of the year.

"It's hard to offer your child for debt. We had nothing else to offer except our own child," said Nazo, Ibrahim's wife.

Following the collapse of Afghanistan's government, suicide attempts are also on the rise and people are reporting increased psychological and mental illnesses. Poverty is on the rise, and the absence of color and crowds from the previously bright and bustling streets of Kabul make it more notable.

In the western Badghis province of Afghanistan, people have been hit hard by long droughts and been forced to leave their homes and villages. Najeeba, a young girl who lives in a camp, has been traded by her family in return for 50,000 Afghanis.

"It's very cold during the night, and we have nothing to make our homes warm. We want NGOs to help us," Najeeba told DW. "I am still a girl. I have two brothers, a sister and a mother. I do not want to get married and want to study and get educated instead," she added.

While the new rulers of Afghanistan are still struggling for international recognition and to prevent the country's economic collapse, international welfare organizations are calling for immediate humanitarian aid.

'The time is now'

Earlier this week, WFP Executive Director David Beasley called for immediate and generous support at a high-level meeting in Geneva.

"The time is now, we cannot wait six months: We need the funds immediately so we can move the supplies, to pre-position before the winter sets in," he said. "We cannot turn our back on the people of Afghanistan."

The human toll of spiraling hostilities still remains immense in Afghanistan. The UN is particularly worried about the impact of the conflict on women and girls. Some 80% of nearly a quarter of a million Afghans forced to flee since the end of May are women and children.

According to the UN Office for the Coordination of Humanitarian Affairs (OCHA), from January 1 to October 18, 667,903 people fled their homes because of conflict. A total of 33 out of 34 provinces had recorded some level of forced displacement.

While unemployment soars in Afghanistan and income sources have dried for many, there has been an increase in suicides. Rohullah, a 60-year-old guard for a government-run school in northern Badakhshan, and a father who had not received his salary for the past three months, is someone who took that desperate option, leaving a grieving family behind.

Taiba, Rohullah's daughter, told DW: "He did not say anything. One day we were all home and he asked for a pen and paper to write down the debts we owe. We all thought he is kidding with us, but he was serious and some days later he committed suicide."

Qatiba, another daughter, told DW: "We face a lot of problems, and, since our father died, we have nothing to eat."

Afghanistan's economy will shrink by up to 30% this year, according to the International Monetary Fund. The GDP in 2020 was about $20 billion. And according to the World Bank, 43% of that was based on aid money from abroad. Before the Taliban takeover, 75% of public spending came from foreign aid grants.

The departure of foreign forces and many international donors left the country without the grants, which financed three-quarters of public spending.

Over the past few months, the Taliban government has struggled to pay salaries owed to civil servants while food prices have soared and banks have faced a cash crunch.

Many Afghans are selling possessions to buy food. Gul Ahmad's only remaining valuables are his other daughters, who may face a similar fate to their older sibling, unless Afghans receive help from the outside world.

What does India want to achieve through Afghanistan talks?

India fears that a Taliban-controlled Afghanistan would benefit Pakistan. The government is trying to protect its strategic interests.

20 years in Afghanistan: An eyewitness story

The documentary "My Childhood, My Country" follows an Afghan who lived in the Bamiyan caves as a young boy and grew up to see the Taliban reoccupy his country.

At least one person has been killed in an explosion in Kabul. The largely Shiite neighborhood has previously been targeted by "Islamic State-Khorasan" attacks.