UN: Millions more people on the 'edge of famine'

COVID and conflicts have pushed the number of people facing food insecurity to 45 million, with Afghanistan fast becoming the "world's largest humanitarian crisis." 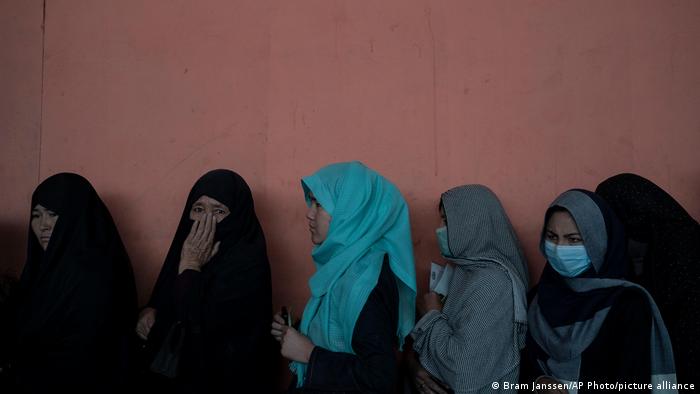 Afghanistan, where these women are waiting for aid, is fast 'becoming the world's largest humanitarian crisis'

The United Nations' food agency on Monday warned that 45 million people across 43 countries were "teetering on the edge of famine."

That represents an increase of nearly 3 million this year alone.

What is behind the increase?

David Beasley, executive director of the World Food Program (WFP), said in a statement that "tens of millions of people are staring into an abyss."

"We've got conflict, climate change and COVID-19 driving up the numbers of the acutely hungry, and the latest data show there are now more than 45 million people marching towards the brink of starvation," he said.

The latest rise, up from 42 million a year earlier and 27 million in 2019, has been attributed primarily to those facing emergency levels of food insecurity in Afghanistan.

"Manmade conflict is driving instability and powering a destructive new wave of famine that threatens to sweep the world," said Beasley.

Millions of Afghans on the brink of starvation

Why Afghanistan has become a hunger hot spot

Beasley's comments came after a fact-finding trip to Afghanistan. The food agency has increased support to assist nearly 23 million people in need following the Taliban takeover of the country.

"Fuel costs are up, food prices are soaring, fertilizer is more expensive, and all of this feeds into new crises like the one unfolding now in Afghanistan, as well as long-standing emergencies like Yemen and Syria," Beasley added.

The country "is becoming the world's largest humanitarian crisis, with the country's needs surpassing those of the other worst-hit countries," the WFP reported.

Families have been pushed to the edge with multiple droughts exacerbating the economic meltdown that has forced people to make "devastating choices," like pulling their children from school or marrying them off early.

"Meanwhile media reports from Afghanistan point to families reportedly being forced to sell their children in a desperate attempt to survive," said the WFP.

What needs to be done to combat hunger

The WFP said the cost of averting famine across the world had risen to $7 billion (€6.05 billion), up from the $6.6 billion anticipated earlier this year.

That sum would provide a meal a day for each person for the next year, the WFP calculated.

The agency said it was collaborating with humanitarian partners to increase aid for those facing starvation, but resources have been unable to keep pace with rising demand.

"As the cost of humanitarian assistance rises exponentially, we need more funds to reach families across the globe who have already exhausted their capacity to cope with extreme hunger," the WFP chief added.