Afghanistan: People struggle to make ends meet amid economic turmoil | Asia | An in-depth look at news from across the continent | DW | 08.11.2021

Most of Afghanistan's public servants have lost their jobs and are left with no income since the Taliban takeover of the country. Many are forced to sell possessions just to buy food. 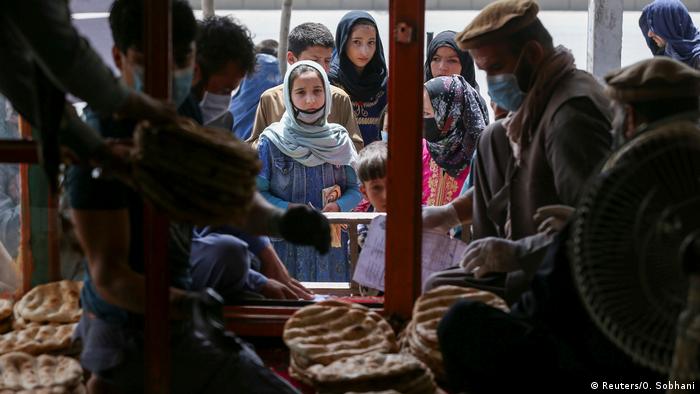 Since the Taliban seized power in Afghanistan in mid-August, the conflict-stricken nation has been dealing not only with political turmoil but also a severe economic crisis and increasing poverty.

Some $9.5 billion (€8.2 billion) in central bank reserves remain blocked outside the country and the international support given to the previous government has dried up.

The departure of foreign forces and many international donors has left the country without the grants that financed three quarters of public spending.

Over the past few months, the new Taliban government has struggled to pay salaries owed to civil servants while food prices have soared and banks have faced a cash crunch.

The IMF said last month that Afghanistan's economy was set to contract by as much as 30% this year.

'One step away from starvation'

The economic disruption, combined with a severe drought and the coronavirus pandemic, has worsened poverty and left millions without work and facing acute hunger.

Some 8.7 million people are "one step away from starvation," Mary-Ellen McGroarty, head of the World Food Program in Afghanistan said in October.

"There is a tsunami of destitution, incredible suffering and hunger spiraling out of control," she added.

Many Afghans are selling possessions to buy food, and urban communities are facing food insecurity on levels similar to rural areas for the first time.

It's not just poor people who have been affected. Even much of the country's middle class are now fighting poverty as the Afghan economy teeters.

Sharifa (name changed), a female ex-government official who previously worked for the women's affairs department, says she is now not only unemployed but also fears retribution from the Taliban.

"I have been unemployed since three months. I have sold all my household items and bought food items with the income," said the mother of two, who asked not to be named due to fear of reprisals.

Ajmal (name changed), who also used to work for a government agency in the capital Kabul, confirms that a number of former government officials are struggling to make ends meet. "These former officials are unfortunately begging now, and some others have turned to daily-wage labor," he told DW.

Even those with savings are struggling to pay for food and household necessities because of the strict limits on withdrawals that were introduced to prevent a run on banks.

The Taliban government also recently banned the use of foreign currencies for transactions like buying a car or a house, saying all contracts must be denominated in the Afghani currency.

Even before the ouster of the previous government, Afghanistan was facing acute economic and developmental challenges.

"Output is expected to have contracted sharply since the Taliban takeover due to the combined impacts of a sudden stop in donor and government expenditure, disruptions to trade, and dysfunction of the banking sector," it added.

Leaving Afghanistan at any cost

Given the dire situation, Ajmal and Sharifa say they're considering emigrating from Afghanistan. "I know that thousands of other families, including mine, are looking for ways to exit the country."

Kamela (not her real name), a mother of four who asked not to reveal her identity, shared a similar view. "We are left with no other option than migration. We are having to sell our household items for half their prices and leave the country."

Last month, the European Union's foreign policy chief said that Afghanistan was facing a breakdown of its economic and social systems that risks turning into a humanitarian catastrophe.

"Afghanistan is experiencing a serious humanitarian crisis and a socio-economic collapse is looming, which would be dangerous for Afghans, the region and international security," Josep Borrell wrote in a blog post.

"If the situation continues and with winter approaching, this risk turning into a humanitarian catastrophe," he warned, adding that this could trigger mass migration to neighboring states.

The United Nations and humanitarian groups have also been warning that further instability and human suffering in Afghanistan could fuel a major migration crisis like the one in 2015 when hundreds of thousands of asylum-seekers from Syria made the journey to Europe.

Millions of Sri Lankans are struggling to secure two square meals a day and afford critical medicines amid the nation's acute economic turmoil.