Is the Amazon effect behind low inflation? | Business | Economy and finance news from a German perspective | DW | 26.07.2018

Is the Amazon effect behind low inflation?

Central bankers around the world are puzzled by the lack of inflationary pressures despite decent economic growth. Some of them are now blaming the so-called Amazon effect for the phenomenon. 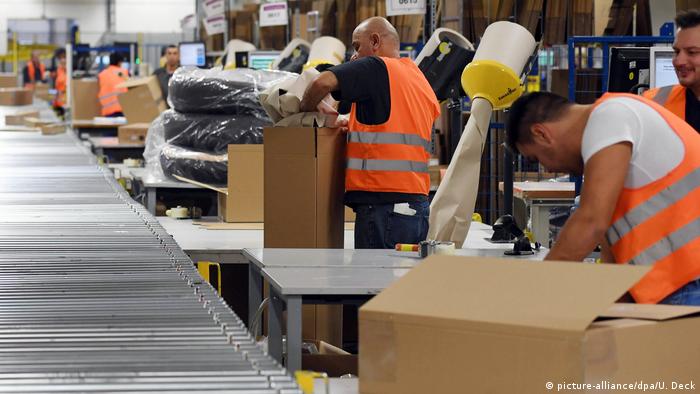 The Japanese central bank has a problem. For years, it has been flooding the financial markets with crazy amounts of money. The goal is to drive inflation higher, to meet its target of around 2 percent. But so far it has had little success on this front. In June, inflation in Japan hovered at 0.8 percent.

From the point of view of the central bank, this rate, which is still comfortably high, is largely due to the climb in global crude prices. Without it, the price rise was a mere 0.2 percent, a level that's perilously close to deflation — a situation that central bankers fear and desperately try to avoid as it can trigger a vicious cycle of falling prices and declining investment that can ultimately result in a severe recession.

But this isn't only a problem in Japan. In other regions of the world, central banks are also working diligently to push inflation up toward their target value. The European Central Bank (ECB), for instance, will continue to buy bonds worth €30 billion ($35 billion) every month until at least September. Despite their efforts, ECB chief Mario Draghi and his lieutenants have so far been unsuccessful in this regard, with core inflation in the eurozone remaining well below 2 percent.

At times, when things are not going the way they should, explanations are sought, and the Japanese central bank has now found one.

Quoting a study, the bank said during its last meeting that e-commerce companies like Amazon are the reason behind the lack of adequate inflation, as they led to price wars and the comparability of prices.  As a consequence, prices rose more slowly than at other times — and even slower than what economic theories suggest.

According to the bank, Amazon and its peers have pushed down inflation by about 0.1 to 0.2 percent.

"For me, it's hard to imagine that they have caused prices to drop so much," said David Kohl, chief economist at the Swiss bank Julius Baer. "That's because they could have a one-time effect, but not a permanent one."

Inflation indicates the rate of change in price levels compared to the levels during the same period in the previous year. For this reason, a rising or falling oil price over the year can, for instance, have a significant impact on inflation. Incidentally, this is also the case right now.

As oil prices have doubled since last summer, inflation figures that include them are currently comparatively high. That's why ECB President Draghi and other central bankers prefer to ignore the general inflation rate, and instead focus on core inflation, which, among other things, excludes oil prices.

On the other hand, the impact of online portals such as Amazon is more than just a one-off phenomenon. Increasing digitalization has also had the effect of trimming down production processes, which has resulted in companies producing goods and services more efficiently and cheaply, leading to falling prices. "Internet commerce and increasing digitalization are definitely having an impact on the economy," said Carsten Brzeski, chief economist at ING Diba. 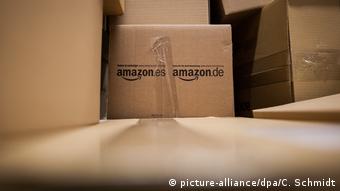 Even in Japan, Amazon has increased the number of its shipping centers in over the past decade, which has shortened supply chains and reduced costs

"This is just the beginning. Due to e-commerce, increasing competition and transparency, the prices will face further downward pressure. And that, of course, is something that gives the central banks a headache," he added.

In any case, the Japanese central bank points out that Amazon has vastly increased the number of its shipping centers in Japan over the past decade. This has shortened supply chains and reduced costs.

Furthermore, since the online retailer does not operate any branches, and instead delivers the goods to the customer through warehousing and fast delivery, it also enjoys a price advantage over stationary retailers. And even if it's not the case, stationary retailers suffer from the fact that Amazon's prices can be accessed at any time by everyone via a smartphone. This raises pressure on brick-and-mortar retailers to offer their customers similarly low prices.

This is why an increasing number of economists are asking whether the inflation target of many central banks of around 2 percent has long become obsolete. They argue that increasing e-commerce and digitalization will continue to put downward pressure on inflation, and probably significantly more pressure than that in the past.

Is Trump's criticism of Amazon justified?

President Trump has recently been bashing Amazon, accusing it of not paying its fair share of taxes and posing an unfair challenge to conventional retail stores. Despite bluster, concrete action is unlikely, say experts. (04.04.2018)