Is Russia using vacuum bombs in Ukraine? | Europe | News and current affairs from around the continent | DW | 03.03.2022

Ukraine has accused Russia of using a vacuum bomb during its invasion. The use of these weapons, whose destructive power is immense, is prohibited in populated areas. DW looks at how they work and the harm they inflict. 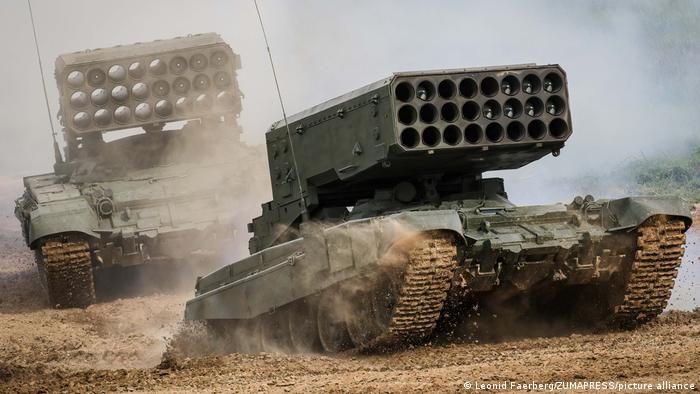 A Russian multiple rocket launcher with a thermobaric weapon, seen here as part of a military exhibition

On Monday, the Ukrainian ambassador to the US accused Russia of using thermobaric weapons in Ukraine, but her claim has yet to be officially verified.

After meeting with US lawmakers in Washington, Oksana Markarova told reporters: "They used the vacuum bomb today, which is actually prohibited by the Geneva Convention."

What are vacuum bombs?

Also known as aerosol bombs or fuel-air bombs, vacuum bombs are thermobaric weapons. The name is derived from the Greek for heat and pressure.

Whereas most conventional weapons use a mixture of fuel and an oxidizing agent to cause an explosion, these bombs consist almost 100% of fuel and rely on oxygen in the air to explode. After the first explosion, the fuel is finely dispersed in the atmosphere like a cloud and then it is ignited, causing a massive blast.

After the detonation and the shock wave, there is a vacuum effect, when all oxygen is extracted from the air as the bomb does not have its own oxidizing agent.

'This war has united large parts of Ukrainian society'

What damage is incurred?

Vacuum bombs have immense destructive power. In a report from February 2000, Human Rights Watch quotes a CIA study: "Those near the ignition point are obliterated. Those at the fringe are likely to suffer many internal, and thus invisible injuries, including burst eardrums and crushed inner ear organs, severe concussions, ruptured lungs and internal organs, and possibly blindness."

Have these weapons been deployed?

On February 26, Frederik Pleitgen, a reporter with the US network CNN, posted a video on Twitter with the title "Russian thermobaric 'vacuum bombs' launcher seen by CNN team in Ukraine"

Pleitgen wrote: "The Russian army has deployed the TOS-1 heavy flamethrower which shoots thermobaric rockets ... South of Belgorod." Belgorod is a Russian city not far from the Ukrainian border.

"We know that the Russians have such weapons systems in the area," Frank Sauer from the Bundeswehr University in Munich confirmed.

Where are they alleged to have been used?

Russia is accused of using the bomb in the Ukrainian city of Okhtyrka in Sumy Oblast. Photos and videos showing the alleged impact have been posted to social media channels.

Asked about this on Monday, White House spokesperson Jen Psaki said the US had not independently verified the reports. "I don't have any confirmation of that. […] We have seen the reports. If that were true, it would potentially be a war crime."

Two days later, Linda Thomas-Greenfield, the US ambassador to the UN, made a speech to the UN General Assembly in which she made similar allegations and told Russia to stop its war.

"We have seen videos of Russian forces moving exceptionally lethal weaponry into Ukraine, which has no place on the battlefield. That includes cluster munitions and vacuum bombs — which are banned under the Geneva Convention," she said. 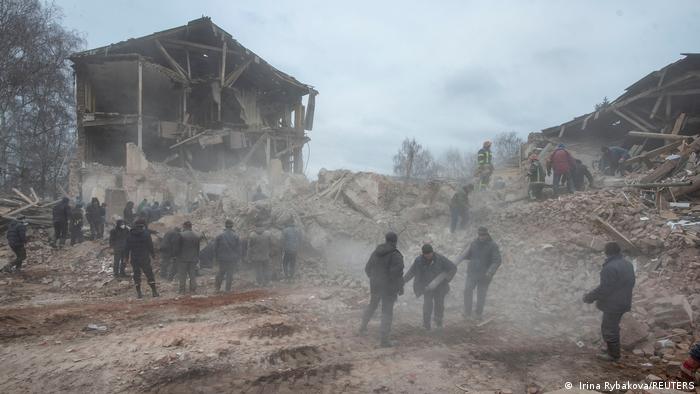 "Looking at the pictures from Ukraine, I think it is quite possible that aerosol bombs are being used there. However, it is not possible to confirm this with certainty from the video footage," said Sauer of the Bundeswehr University.

Military expert Gustav Gressel, who works at the European Council on Foreign Relations, a pan-European think tank, examined the footage for DW. He reasoned similarly: "In my opinion, no other weapon, apart from nuclear weapons, would have that strength."

But he added that it could not be ruled out that something explosive had been hit. "However, in that case we would be more likely to hear a series of detonations," he said. A report in the German Frankfurter Allgemeine Zeitung daily said there were doubts, even in Western intelligence circles, that the explosion analyzed had been caused by a vacuum bomb.

Should it turn out that Russia has used vacuum bombs in Ukraine, it would be considered a war crime and could be taken to court by Ukraine. "The possession of such weapons is not prohibited, but their use in populated areas is [outlawed] because they have an expansive effect," Sauer said.

This story was originally written in German