In a video message to the UN Human Rights Council, the German foreign minister has accused Russia of severe human rights violations during its invasion of Ukraine and called for an urgent inquiry. 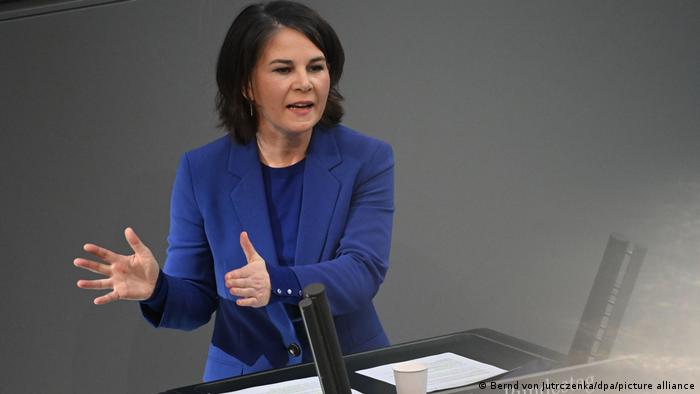 Her remarks in an English-language video message to the UN Human Rights Council come as Russian troops besiege Ukrainian cities for an eighth day, causing widespread destruction and forcing hundreds of thousands to flee their homes.

Baerbock said that "Russia's invasion of Ukraine is an attack on the Ukrainian people: on their fundamental rights."

"What's at stake here is nothing less than the gravest human rights violations: the right to life and the right of the Ukrainian people to determine their own fate," she said.

Baerbock said that human rights were "what make us," mentioning mothers in Kyiv, the organization Memorial in Russia, the jailed Russian opposition figure Alexei Navalny and anti-war protesters in Russia as some examples of people suffering under a curtailment of these rights.

In addition, Baerbock said that "we urgently need a Commission of Inquiry on Ukraine to investigate all violations of human rights that have been committed by Russia since its military aggression."

"Later this year, Germany will ask for your support for serving for another three years on this Council. We do so because we believe that all of us, together, must place people's rights at the core of what we do. For the mothers, fathers and children in Ukraine. For all those who suffer. We must act," Baerbock said.

In her speech, she also called for human rights accountability mechanisms for Belarus, South Sudan, Syria and Myanmar and urged the release of the High Commissioner for Human Rights' report on the detention of Muslim Uyghurs in China.

On Tuesday, Baerbock spoke at a special assembly of the UN, where she accused her Russian counterpart, Sergey Lavrov, of lying to the Human Rights Council about Moscow having legitimate reasons for attacking Ukraine.

"Mr. Lavrov, you can deceive yourself, but you won't deceive your own people,'' Baerbock said.

Baerbock: 'Russia's war marks the dawn of a new era'