India has big ambitions to slash crude oil imports and push for an electric vehicle future, but high costs and a lack of infrastructure could hamper the country's green narrative. 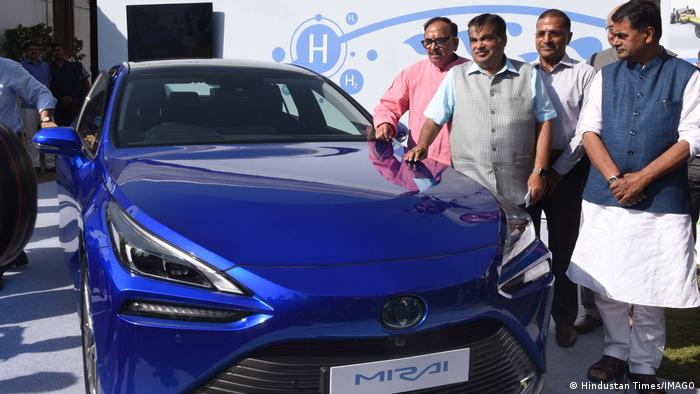 India's manufacturing of fuel cell electric vehicles (FCEVs) has kicked off with several automakers rolling out electric cars at a rapid pace.

India is among a handful of countries that aim for electric vehicles (EVs) to account for at least 30% of all new automotive sales by 2030.

In March, Transport Minister Nitin Gadkari, who has been championing alternative fuel, drove to Parliament in his hydrogen-powered Toyota car to make a statement that he would use it himself as a pilot project.

"I have favored a green transition in fuel, and rapid strides in green fuel technology will reduce the cost of electric vehicles, bringing them on a par with petrol-run vehicles in a short time," Gadkari said.

Can India achieve its green ambitions?

At the COP26 summit, India pledged to achieve net-zero emissions status by 2070 and to lower its emission intensity by 45% from 2005 levels by 2030. EVs could help realize these goals and play a pivotal role in India's green transition.

"A transportation revolution will have many components: better walkability, public transportation, railways, roads and better cars. Many of these better cars will likely be electric," he said.

The transport sector accounts for 18% of total energy consumption in India, which translates to an estimated 94 million tons of oil-equivalent (MTOE) energy.

The Bureau of Energy Efficiency estimates that, if India were to follow the current trends of energy consumption, it would require an estimated 200 MTOE of energy supply annually by 2030 to meet demand.

Challenges to an electric future

Powered by hydrogen and one of the best clean energy alternatives in vehicles, EVs are more efficient than conventional internal combustion engine vehicles, and produce no tailpipe emissions, reducing pollution levels while emitting water vapor and warm air.

Some industry analysts claim that this could potentially allow India to save on crude oil imports worth over $14 billion (€13.5 billion) annually. Rapid adoption of two- and three-wheeler EVs is expected to lead the way to this transition.

India's road to a fully electric ecosystem still has a few hurdles — including high costs, inadequate infrastructure and a lack of high-performing EVs.

"While the electric vehicle program has begun to receive policy attention at the national and state level, it has not yet been able to catalyze the market to build scale," Anumita Roy Chowdhury, executive director at Centre for Science and Environment, told DW.

She said EVs still made up less than 1% of new vehicle sales and that a regulation target and a zero-emissions mandate at the national level still needed to be developed.

State-level EV policies with time-bound targets could make a difference, she said. For instance, Delhi, which has set a target of 25% electrification by 2024, has already increased its share of EVs to 12.5%.

"Overall, the challenges of inadequate charging networks ... limited EV models in the market, uncertainty around the battery costs and weak consumer awareness are some of the key factors impeding accelerated electrification," Chowdhury said.

The Indian government introduced its Faster Adoption and Manufacturing of Hybrid and Electric Vehicles in India (FAME) program as well as several supply- and demand-side incentives to facilitate the switch to EVs.

Some states have also set their own ambitious EV targets; 18 out of 28 states already have a draft policy in place or have called for one.

Safa Khan, an energy consultant, told DW that, while FAME is expected to set up 2,877 charging stations in 68 cities across 25 states by 2024, India only has 934 charging stations to cater to all types of vehicle classes as of June last year. In comparison, China has approximately 900,000.

"The planning process needs to strike the right balance between low- and high-power charging points in locations that ensure equitable access to a diversity of EV users," Khan said.

"A switch to EVs represents the opportunity for communities to move towards less localized air pollution, and the onus is on the government to ensure these benefits are accrued equitably," she said.

As smog chokes Delhi, India struggles to ease off coal

Shrouded in toxic smog, New Delhi has shut down schools and workplaces. Though nations pledged to move away from coal at the UN climate summit, India is reluctant to replace the polluting fuel source.