Is carbon capture and utilization a lifeline for oil and gas? | Business | Economy and finance news from a German perspective | DW | 12.08.2021

Is carbon capture and utilization a lifeline for oil and gas?

The 2050 climate neutrality goals require the right technologies. The current round of post-pandemic investment is decisive for a successful strategy. What role will carbon capture and utilization play in this, if any? 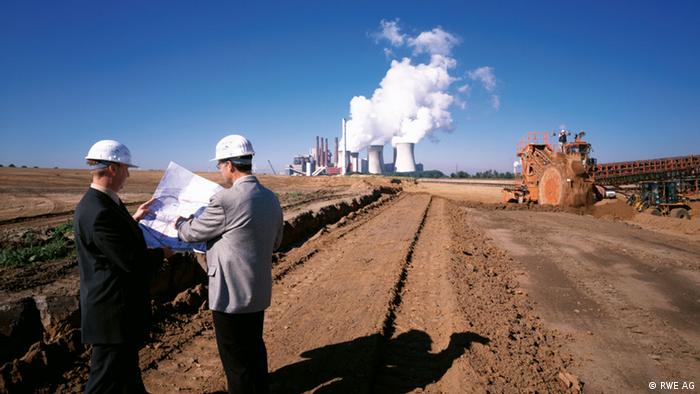 As the world gets serious about the 2050 climate neutrality target, technology deployment is speeding up. Amongst the emissions-reducing measures available today, the International Energy Agency (IEA) expects carbon capture, utilization, and storage (CCUS) to play critical roles.

This 50-year old technology involves capturing carbon dioxide (CO2), which can be used to create products (utilization) or reinjected into the ground (storage), normally in depleted oil and gas fields.

Opposition to this technology comes from environmental groups, which see CCUS as an instrument for the hydrocarbon industry to remain in business.

"Every chunk of money spent on artificially supporting the toxic technology of the past should instead be spent on an equitable transition to a brighter future," Philip Wheeler, Network Developer at Food & Water Europe, told DW. "Polluters want to keep us all addicted to their destructive fuels, and CCS [carbon capture and storage] is a mask they use to disguise the continuing destruction."

"The current German government and political parties seem to agree it is better to avoid a CCS debate, at least prior to the federal election. For example, the new Climate Protection Act certainly does imply the use of CCS in industrial sectors like the cement industry, but it is not explicitly mentioned," Oliver Geden, head of the EU/Europe Research Division at the German Institute for International and Security Affairs (SWP), commented.

Explainer: How to store CO2

The state of affairs

Geden explained that there was currently no alternative to CCUS for near-zero cement production, adding that CCUS technologies could come in handy also in the steel and hydrogen sectors. Hydrogen from renewables could not be enough to create a market in the medium term, and hydrogen derived from gas (grey hydrogen) would need CCUS to be considered environmentally friendly.

Alongside the current focus on hydrogen, the CCUS momentum is now growing, after years of declining investments. "Currently, there are a total of 66 commercial CCS facilities in various stages of development globally. We expect that number to rise significantly in the next year," said Jeff Erikson, general manager of Client Engagement at the Global CCS Institute.

While Japan's showcase project on Hokkaido Island is a reference point, several other projects are about to start operations. Two pilot projects in the UK aim to create the world's first net-zero industrial cluster by 2040. The world's largest facility capturing CO2 directly from the air should start operating in 2024 in the United States while Northern Lights will offer European companies the opportunity to store their CO2 emissions under the Norwegian seabed from 2024.

Bruun said Northern Lights had signed 12 memoranda of understanding with industrial emitters. "We hope to be able to sign our first contract within the next year."

In Norway, public funding is not much of a red flag because of the country's long history of hydrocarbon production.

Similarly, the United States, the United Kingdom, the Netherlands and Australia are currently pouring funds into stimulating CCUS development. Depleted fields could thus turn into assets.

Studies suggest that CCUS technologies are the most cost-effective solution under certain conditions.

"Replacing fossil fuels is the cheapest option for 75%-80% of fossil CO2 sources, and then the cost of replacement goes through the roof. For many of these ‘final 25%' uses, it will make much more sense to dispose CO2 than avoid generating it in the first place," said Myles Allen, head of the Climate Dynamics group at the University of Oxford's Atmospheric, Oceanic and Planetary Physics Department.

To tackle the "reasonable opposition" from the environmental movement, Allen suggested shifting the financial burden of CCUS investments to the oil and gas industry.

The Oxford professor explained that postponing CCUS plans would be a mistake. "It is a great idea to sequester carbon in reforestation and ecosystem restoration, but by mid-century it is quite likely that we will need all the nature-based solutions capacity we have just to compensate for the impact of past emissions, with nothing left to compensate for ongoing fossil fuel use," he explained. "That's because, as the world warms, the biosphere releases the CO2 we have already stored in it."

David Reiner, senior lecturer in technology policy at Cambridge, wants a broader debate as soon as possible. "Decarbonization is going to be a slow and difficult process."

Any mistake made with these technologies might further strengthen public opposition.

"Given that CCS is fairly novel in many people's minds, the first projects could have an oversized impact on public perception," Reiner told DW, adding that tangible, well-planned CCS facilities in the right geological conditions (offshore) will help change public opinion.