Iraq's new prime minister, Haider al-Abadi, has his work cut out for him. In a country of deep division, he has to find a way to restore trust and bring the alienated Sunni population back into the fold. 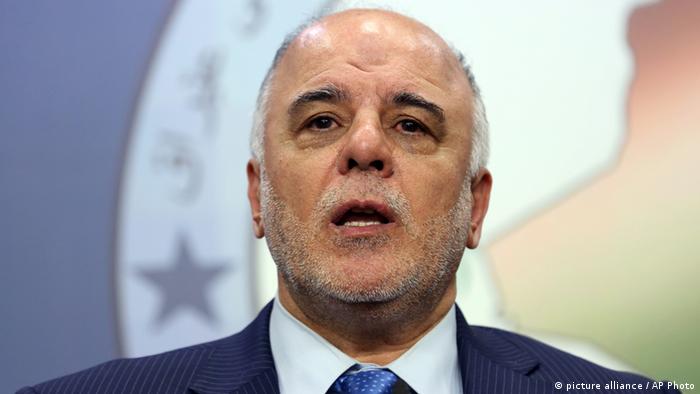 Iraq's outgoing Prime Minister Nuri al-Maliki leaves a trail of problems in his wake. The advance of Islamic State (IS, previously ISIS) militants continues; the Kurds are in the process of creating their own state in northern Iraq; and there is a deep divide between the nation's Sunni and Shia populations.

On Thursday evening, after months of digging in his heels, al-Maliki finally announced in a televised address that he was dropping his bid to stay in power and would back his successor and fellow member of the Shi'ite Dawa party, Haider al-Abadi. The road ahead promises to be a rocky one.

Long before he stepped down, al-Maliki's popularity had begun to wane both inside and outside Iraq. The Sunni minority felt marginalized and many regarded the IS as the lesser evil when pitched against the Shia government in Baghdad. And in ignoring vocal calls for the creation of a national unity government to tackle the threat of the Islamic State, he also alienated members of his own Shia community.

Ultimately, he even lost Iran's support. Back in 2006, he entered office with Tehran's blessing, but more recently his own Dawa Party proposed al-Abadi as the new prime minister.

"This seems to be a way of finding a politician who's able to bridge the gaps within the Iraqi political elite to make the Sunnis more inclusive," Theodore Karasik, with the Institute for Near East and Gulf Military Analysis (INEGMA) in Dubai, told DW.

Ali Hashem, who writes for the Middle East news site "Al-Monitor," says al-Maliki had several opportunities to change tack. Citing unnamed sources, he said the former prime minister could have become vice president, but preferred not to settle for an office which for all intents and purposes is powerless.

In the search for candidates, Hashem continued, al-Abadi was initially an outsider. Other politicians such as Ibrahim al-Jaafari or Ahmed Chalabi would have been more prominent, but what Iran wanted was a candidate who would not further alienate the Kurds and Sunnis and exacerbate the current crisis. 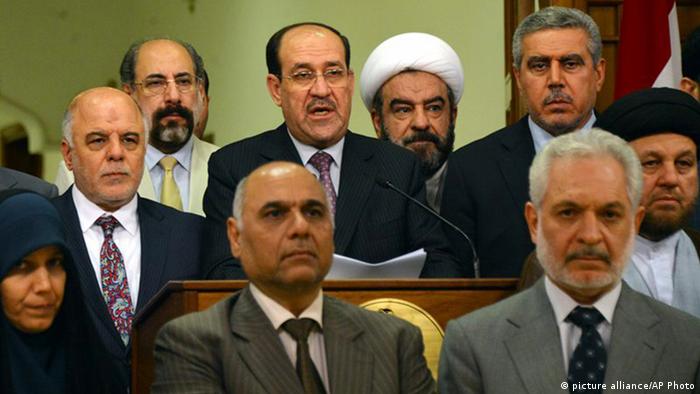 Nouri al-Maliki stepped aside for another member of his party, Haider al-Abadi

During the rule of Saddam Hussein, al-Abadi spent a long time living in exile in London, and in 2004 became telecommunications minister in the post-dictatorship transitional government. Karasik is not surprised at his choice as the new head of government and says his main task will be to bring the country back into working order. It will be a tall order given the current chaos, but Karasik says the new leader has come to the post with a pro-active mindset and has already made contact with members of the military from Saddam Hussein's era.

"It's highly significant that he is meeting with people from the former regime," he said.

Under Saddam Hussein, the military was Sunni dominated, and many former officers are now fighting with Sunni militias including the "Islamic State." But al-Maliki - a Shiite notorious for his sectarianism - would not have had the same access to leading Sunnis, many of whom were ousted when the Hussein regime fell.

Family and fortune in safety

The INEGMA director says the fact that power has gone to a member of the same political party made it easier for al-Maliki to step down.

"[He] knows that if someone from his block is in power that's pleasing to the Americans and the Iranians at the same time, that [his] family as well as any wealth that he accumulated as well as some of his power will still be in tact," Karasik said. 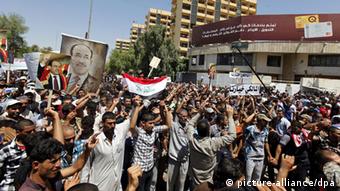 Supporters of al-Maliki took to the streets, demanding that he remain in office

In Bagdad, al-Abadi has been receiving messages of congratulation and calls for action. The country's influential Shia leader, Ayatollah Ali al-Sistani, spoke of the need to tackle corruption, terrorism and the religious divide.

US National Security Advisor Susan Rice described the new appointment as a step toward a united Iraq, and United Nations Secretary-General Ban Ki-moon called for the creation of "an inclusive, broad-based government" ready to immediately address pressing issues.

For his part, al-Abadi has already announced on Facebook that he doesn't want to make any unrealistic promises. His first challenge will be to appoint a cabinet that meets with majority approval. He has thirty days to pull it off. Thirty days in which the world will be watching and assessing his every move.