Iran has a good deal of influence on Iraq. As Tehran turns its back on Nouri al-Maliki, his days as Iraqi prime minister are numbered. 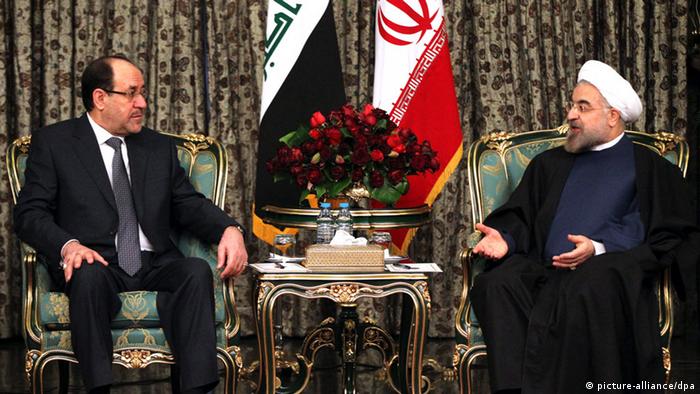 There was a time when Iraqi Prime Minister Nouri al-Maliki was assured of the Iranian government's support. In 2006, Tehran rubber-stamped his first election as premier. The Shiite Iraqi leader could also count on help from his Shiite neighbor in the fight against Sunni extremists. But now, Tehran is moving away from a prime minister who rejects national reconciliation, thus fueling the conflicts in Iraq.

On Tuesday, Iran's national Security Council announced a change of course: the country now supports a parliamentary procedure to replace al-Maliki. The third term in office al-Maliki has been planning for since parliamentary elections in April appears to be beyond reach, with Haidar al-Abadi, deputy President of Parliament in Baghdad, likely to be the one to receive Iran's blessing. On Monday, Iraq's president called on al-Abadi to form a new government.

Since the fall of dictator Saddam Hussein in 2003, Iran have been heavily involved in their neighbors' affairs. According to Ferhad Seyder, an Iraq expert and a professor at Erfurt University, the influence hails from years ago. During Hussein's reign between 1979-2003, the Shiite majority in Iraq remained steadily suppressed and many of them fled to neighboring Iran.

"Close relationships were formed as a result of this," said Seyder in an interview with DW. Since then, Tehran has established strong connections with nearly all the Shiite parties, movements, organizations and militias in Iraq. Even the Patriotic Union of Kurdistan, one of the two most important Kurdish movements in northern Iraq, is allied with Iran. 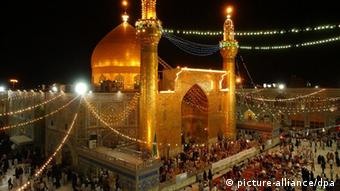 Many make the pilgrimage to Imam-Ali-Schrein's grave in Najaf

Tehran's sway over Iraq's development is evident on a number of levels. "The first Iranian influence in Iraq is obviously political. Iran has had a lot of influence on the Iraqi government, mainly it has enjoyed very good relations with the Daawa party, which is the political faction that al-Maliki used to belong to and now the new Prime Minister al-Abadi also belongs to," said Lina Khatib, director of the Carnegie Middle East Center in Beirut.

Khatib added that, "Iran has been funding and supporting not just the Iraqi army but also a number of Shiite militants within Iraq."

The third influence comes in a relgious context, with Khatib seeing a close religious tie between the Shiites of both countries. In the Iraqi cities of Najaf and Karbala lie the two highest Shiite sacred sites. Hundreds of thousands of people from both Iraq and Iran make the pilgrimage there every year.

Tehran is particularly keen to pull the strings when it comes to Iraqi politics. "Iranian influence is strong enough that it would be unthinkable in the current context for any prime minister to be elected in Iraq without the blessing of Iran," explained Khatib. This also appears to be the case for al-Maliki. That doesn't mean that Iran controls everything though, as Khatib explains. "Iraq harbors a number of Shiite leaders who do not report to the Iranian ayatollah, for example Ayatollah Sistani in Iraq is vocal against Iranian influence and intervention in Iraq and he was one of al-Maliki's key rivals." 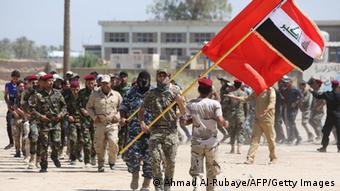 Iraqi Shiites sign up as volunteers for the Iraqi army

Seyder doesn't, however, see a Shiite-dominated government in Baghdad as an Iranian puppet. "There are limits to Iran's influence," said Seyder looking at the struggle to find a new prime minister, one that has dragged on since April. Iran simply doesn't want al-Maliki in charge anymore. Although the powerful Iranian general Kassim Soleimani has been running crisis management over the last few months, al-Maliki is proving difficult to shift. "If an Iraqi political power wants to be awkward, Iran can't then be expected to work a miracle," commented Seyder about the tenacious al-Maliki.

Iraq part of the Shiite crescent

Iran is nearly four times as large as Iraq and has roughly three times as many inhabitants. For Tehran, the neighbor to the west remains strategically significant. According to Seyder, they are a link in the Shiite crescent. This half-moon Shiite area runs from Lebanon, across Syria and then from Iraq to Iran. "This is a very expensive project. A lot of effort and money has been invested so as to retain Iran's influence," said Seyder.

The political, strategic and religious interests that Iran has in Iraq are under threat from the advance of the Sunni terrorist group "Islamic State" or IS, formerly known as "Islamic State in Iraq and Syria" (ISIS). To stop the extremists from storming into prominence, Iran have joined forces with their archenemies the United States.

"Iran has already sent its elite Republican guards to help in the fight against IS in Iraq and recently, as we speak, the US has begun military strikes against IS as well," said Khatib.

Both Iran and the US support the central government in Baghdad, as well as the Kurds in their battle against the extremists. According to Khatib, "the spread of IS in Iraq presents an opportunity for increased dialogue between Iran and the United States as they both face a common enemy, which is the 'Islamic State.'"

The relentless march of the 'Islamic State'

The "Islamic State," formerly known as the Islamic State of Iraq and Syria (ISIS) has dramatically expanded its power base in recent months. DW takes a look at the group's origins, financing and wider implications. (10.08.2014)