Nuri al-Maliki has stepped down as Iraqi prime minister, paving the way for a new coalition that international and regional powers hope can bring an end to an Islamist insurgency that threatens stability in Baghdad. 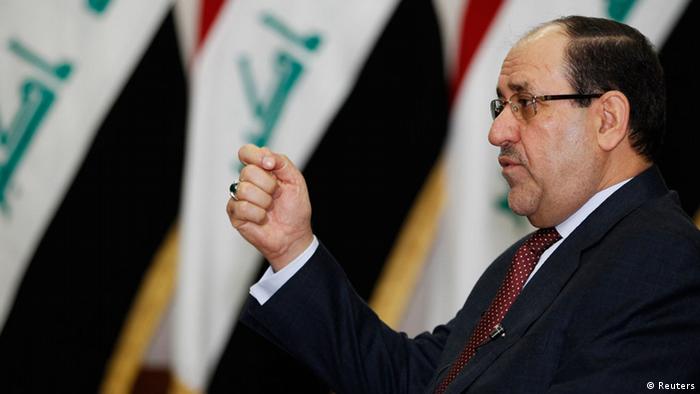 Al-Maliki announced his resignation in an address on Iraqi state television late Thursday, finally bowing to pressure from within Iraq and abroad, after being widely blamed for alienating Iraq’s Sunni minority from which "Islamic State" (IS) militants have drawn support.

"I announce before you today, to ease the movement of the political process and the formation of the new government, the withdrawal of my candidacy in favor of brother Dr. Haider al-Abadi," said Maliki, standing next to his designated successor in front of rolling TV cameras.

Pressure to step down

The pressure on al-Maliki to resign intensified this week when his Shiite political alliance announced they would back al-Abadi, who President Fouad Massoum nominated on Monday to form the next government. Al-Maliki refused to step aside, claiming the nomination violated the constitution.

Al-Maliki had also grown increasingly isolated after top Shiite ally Iran, the United States and the UN announced their backing of al-Abadi, who now has 30 days to assemble a cabinet for the parliament’s approval.

The UN Security Council has called on al-Abadi to work swiftly to form "an inclusive government that represents all segments of the Iraqi population and that contributes to finding a viable and sustainable solution to the country's current challenges."

Washington and its Western allies have been pushing for an inclusive government that will ease anger among Sunnis, which helped fuel the spread of IS fighters over much of northern and western Iraq over the past months.

Those advances have driven hundreds of thousands of people from their homes since June, and last week prompted the Obama administration to launch airlifts and airstrikes as the militants threatened religious minorities - including Yazidis - in the largely autonomous Kurdish region.

Germany to send airlift, US to continue airstrikes

Germany has announced it would airlift goods to people stranded in the Sinjar mountains, while US President Barack Obama has pledged to continue airstrikes against IS militants in Iraq. (14.08.2014)

The Pentagon has said a possible US mission to rescue Yazidis trapped on Iraq's Mount Sinjar is less likely to take place after special forces assessed that there are fewer civilians trapped than previously feared. (14.08.2014)