Iraq votes in first elections since victory over IS

Iraqis have voted electronically to elect lawmakers for 329 parliamentary seats. There is no clear front-runner as Prime Minister Haider al-Abadi faces stiff competition from his predecessor. 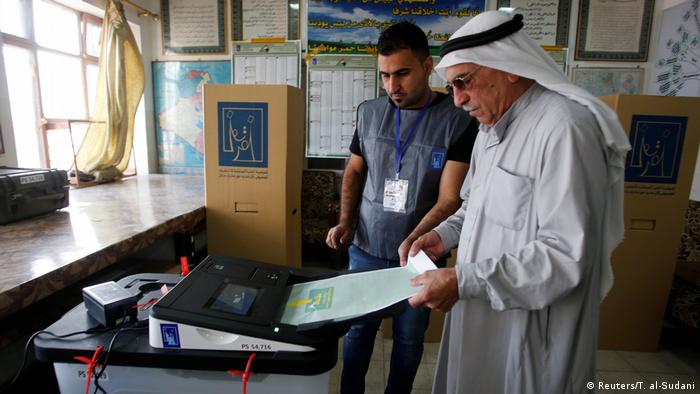 Polls closed in Iraq on Saturday in the first parliamentary elections since the government declared victory over the "Islamic State" (IS) militant group late last year.

The elections took place as Iraq struggles to rebuild itself after nearly four years of war with IS that has reduced several of its cities to rubble.

Iraq polls: At a glance

Read more: The Iraq War: In the beginning was the lie

Jamal Mowasawi, a 61-year-old butcher, said: "I will participate but I will mark an 'X' on my ballot. There is no security, no jobs, no services. Candidates are just looking to line their pockets, not to help people."

Hazem al-Hassan, a 50-year-old fishmonger in Baghdad said: "It's the same faces and same programs. Abadi is the best of the worst; at least under his rule we had the liberation (from IS)."

Fifty-eight-year-old Jassim Mohsen, who fought against IS with the paramilitary forces, said he's casting his vote for the Fatah alliance because of their personal sacrifices.

"I elected the Fatah list because they are the only ones who fought Daesh and gave blood," he said, referring to IS by the Arabic acronym for the militant group.

Key issues: The defeat of IS has brought insurgent-style attacks across Iraq but the country continues to struggle with an economic downturn sparked in part by a drop in global oil prices, corruption, sectarian divisions and years of instability.

Lengthy talks: Negotiations to form a government are likely to drag on for months as dozens of political parties attempt to stitch together a coalition large enough to hold a majority of seats in parliament.

Germany is hoping more Iraqi refugees will return home with the assistance of a massive aid package. But a senior minister has traveled to Iraq to ask for something in return. (21.04.2018)

The US-led coalition battling "Islamic State" in Iraq has closed its land forces command headquarters. The move signals the end of major combat operations, but some will remain for "training" missions with Iraqi troops. (01.05.2018)

Supporters of the Shiite cleric climbed into the fortified Green Zone before entering the parliament building. Iraq is in the midst of a political deadlock with no end in sight.