The US-led coalition battling "Islamic State" in Iraq has closed its land forces command headquarters. The move signals the end of major combat operations, but some will remain for "training" missions with Iraqi troops. 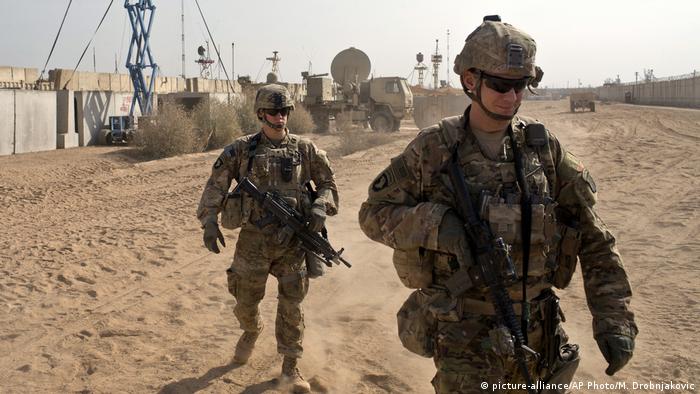 In a major milestone on Monday, the US-led coalition fighting the militant "Islamic State" (IS) group announced the end of ground operations in Iraq.

According to a statement from the US Department of Defense, the coalition's Combined Joint Forces Land Component Command "was deactivated today at a ceremony in Baghdad."

Read more: 'Islamic State' — What next for jihadi 'Beatles?'

Brigadier General Yahya Rasool Abdullah, a spokesman for the Iraqi forces, acknowledged the coalition's contributions to fighting IS.

"The commitment and professionalism of all the men and women from all the coalition nations has been of the highest order, and Iraq is immensely grateful for their sacrifice and dedication in this task," he said in a statement.

IS fighters continue to carry out bomb attacks and assassinations in regions of Iraq and remain active in Syria.

The statement noted that the move signifies the coalition's "changing composition and responsibilities" with regard to Iraqi forces.

The US-led coalition will now shift from supporting and taking part in combat missions to focusing on "the training and development of self-sufficient Iraqi security-related capabilities."

The US and its partners are hoping to avoid repeating the mistakes of its 2011 withdrawal from Iraq. The subsequent security vacuum contributed to the rise of IS in the country.

"The lesson learned from Iraq [is that] it is dangerous to leave too early because we may be forced back into combat operations," NATO Secretary-General Jens Stoltenberg said in February.

The coalition, which operates in Syria as well, has come under fire for civilian deaths in its campaign against IS.

Last Thursday, the coalition acknowledged an additional 28 civilian deaths in Syria and Iraq, bringing the total of non-fighters killed to 883.