A German schoolgirl who ran away to join the "Islamic State" terror group has been handed a six-year jail sentence in Iraq, according to media reports. Linda W. was arrested by Iraqi troops during the battle for Mosul. 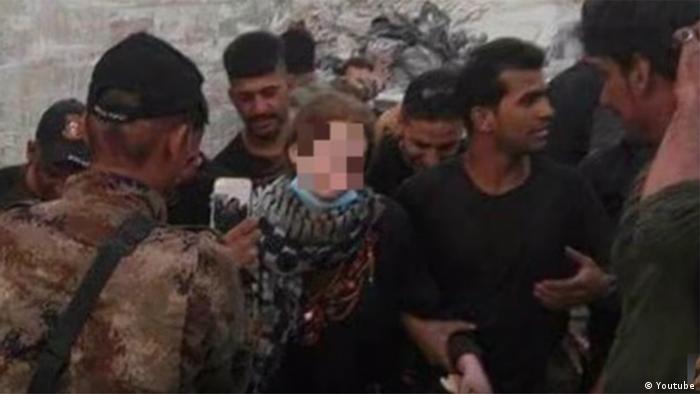 A court in Iraq has sentenced German teenager Linda W. to six years in prison for her involvement with "Islamic State" (IS) jihadis, German media reported on Sunday.

Citing judicial sources in Baghdad, broadcasters NDR, WDR and the Süddeutsche Zeitung newspaper reported that the 17-year-old was given five years for being a member of IS, as well as an extra year for entering Iraq illegally.

The trial took place before a juvenile court in the Iraqi capital and was not open to the public, the reports said. The verdict could not immediately be independently verified by authorities in Germany.

Linda W., a student from the eastern German town of Pulsnitz, ran away from home in mid-2016 after talking to extremists online and converting to Islam. According to her own account, she made her way to Iraq via Turkey and Syria, and married an IS fighter from Chechnya.

Linda W. was arrested by Iraqi authorities in Mosul last summer, when government troops drove the extremist group out of the northern city. She was then transferred to a Baghdad prison.

In a televised interview recorded soon after her arrest, the young German said she regretted joining the Islamist militia.

"I want to go home to my family," she said. "I want to get out of the war, away from the weapons, the noise."

"I don't know how I came up with such a dumb idea. I've completely ruined my life."

Hundreds of IS fighters from Europe

Linda is one of hundreds of foreign women in Iraqi custody accused of having links to IS. In January, an Iraqi court sentenced a German from Mannheim to death for joining the terror group. The unnamed woman, who admitted to traveling to Syria and Iraq with her two children, was convicted of "offering logistic support and helping the terrorist group to carry out criminal acts."

Hundreds of foreign fighters from Europe joined IS after the jihadist group seized large swathes of territory in Iraq and neighboring Syria in 2014.

Many of them, including women, were arrested as Iraqi forces expelled militants from the country. Many other IS rebels and their wives are thought to have escaped capture by blending in with civilians fleeing the fighting.

Baghdad declared victory against IS in December, but the group has continued to carry out attacks on the population, including in the capital.

Each evening at 1830 UTC, DW's editors send out a selection of the day's hard news and quality feature journalism. You can sign up to receive it directly here.​​​​​​​

Journalist on case of Linda W.

German IS bride could face death penalty in Iraq

Iraq's prime minister has said that the courts will decide if 16-year-old Linda W. should face the death penalty for her involvement with IS. The German teen ran away last summer after talking with extremists online. (17.09.2017)