German teenage runaway suspected of joining IS found in Iraq

A 16-year-old German girl who allegedly ran away to Iraq to join the so-called "Islamic State" has been found. The girl, along with three German women, are reportedly being held in an Iraqi prison.

The German teenager, identified as Linda W. in line with German privacy laws, has been found in Iraq and is receiving assistance at the German consulate in Baghdad, prosecutor Lorenz Haase from the German city of Dresden confirmed on Saturday.

However, Haase would not confirm whether the 16-year-old was among the group of women found to have been fighting for the so-called "Islamic State" (IS) jihadi group in Mosul.

"Our information ends with the girl's arrival in Istanbul about a year ago," Haase told the Associated Press news agency, saying that further details about her movements after that were part of an investigation. Haase went on to say that it wasn't clear if Linda W. was going to be returned to her home country.

"The public prosecutor's office [in] Dresden has not applied for an arrest warrant and will therefore not be able to request extradition," he said.

He added that there was a possibility that Linda might be put on trial in Iraq or that she also might be expelled for being a foreigner.

In Iraq, she could face the death penalty if convicted of terrorism related offenses.

Iraqi officials said the young girl was in good health.

According to German weekly "Der Spiegel," four German women, including Linda W., were taken by Iraqi special forces and held in a cell at Baghdad airport, where they were visited by German officials from the Foreign Ministry.

The mayor of Linda W.'s hometown, Pulsnitz, also said that the return of the teenager to Germany was not an imminent prospect.

Mayor Barbara Lüke told the DPA news agency that no one could "pretend that nothing had happened" since the girl's disappearance.

Küke added that while Linda W.'s conversion to Islam had not gone unnoticed at her school, she nonetheless felt surprised about the extent to which the teenager had been radicalized, adding that this must have happened online.

Linda W. had reportedly disappeared from her home in the small town of Pulsnitz last summer, after she claimed to have converted to Islam. Investigators have alleged that she was in contact with a number IS members in online chat forums. 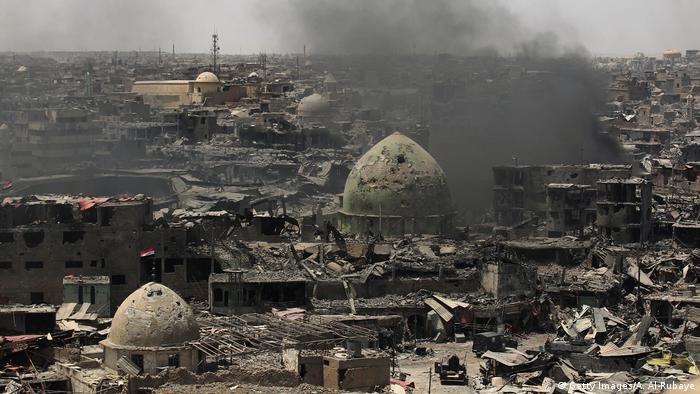 Iraqi forces declared victory over IS earlier this month.

'Married to IS members'

Three Iraqi intelligence and investigative officials, speaking on condition of anonymity, said Linda W. was one of 26 foreigners who were arrested by Iraqi military in Mosul after IS was defeated in the city earlier this month.

They claim that Linda W. had met a Chechen militant online and married him after her arrival in Iraq.

Earlier, German media reported that five German nationals were among the group of 20 or more female Islamist fighters found hiding in a tunnel during the liberation of Mosul.

As well as fighting for the jihadi group, they had all also reportedly been married off to IS members, German media reported.

According to Iraqi forces, many women, including foreign nationals, were deployed by IS as suicide bombers during the campaign to oust the jihadi group from Iraq's second largest city.

Germany's domestic intelligence agency, the BfV, estimates that some 930 people have left Germany in recent years to fight for IS, around 20 percent of which are women. However, girls make up roughly half of all German nationals below the age of 18 who have travelled out to join IS.

Islam expert Marwan Abou-Taam, who works with the criminal investigation bureau for the German state of Rhineland Palatinate, told DPA that young women and girls were drawn to joining IS because Islamist propaganda presented their male fighters as heroic princes. Others, he said, were rather drawn to the group's ideology, while many were also going through personal crises of their own, Abou-Taam added.

Iraqi armed forces out for revenge in Mosul

The recapture of Mosul has brought with it the torture and mass execution of "Islamic State" fighters and their families. The government is looking the other way, and it seems the US-led anti-IS coalition is too. (19.07.2017)