Hundreds of thousands took to the streets to demand an overhaul of Iraq's political system. Protesters also took aim at Iran's influence, with Iraq's top cleric warning foreign powers from interfering in protests. 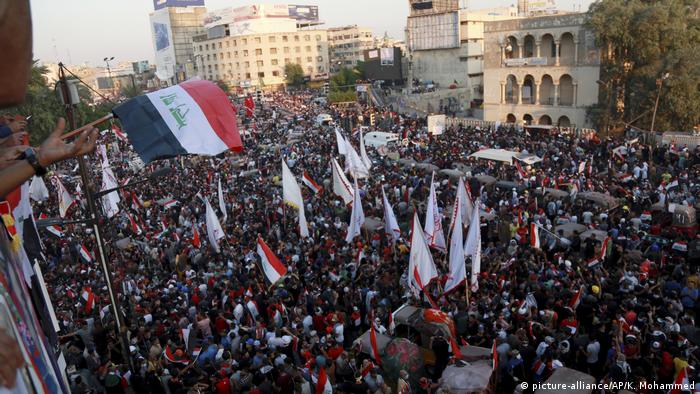 Protesters packed into central Baghdad on Friday in the largest anti-government protest since the demonstrations erupted a month ago.

Hundreds of thousands of people gathered in Tahrir Square, many waving Iraqi flags and demanding that the government resign and that parliament be dissolved.

An estimated 350 people were wounded in Friday's demonstration after security forces fired rubber bullets and gas grenades to push protesters away from bridges leading to the Green Zone, the seat of Iraq's government.

US Secretary of State Mike Pompeo said that the Iraqi government should listen to the "legitimate demands" of protesters, adding that the country's official investigation into deadly violence during the first round of protests "lacked sufficient credibility."

In his weekly sermon, powerful Shiite cleric Ali al-Sistani said Iraq must not be dragged into the "abyss of infighting."

"No person or group, no side with a particular view, no regional or international actor may seize the will of the Iraqi people and impose its will on them," he said in an apparent reference to Iran.

What began as protests against corruption, lack of jobs and poor access to electricity and clean water have now grown into calls for an overhaul of Iraq's political system — which has been in place since Saddam Hussein's ouster.

Something that has made the protests unique in Iraq's history is that public anger is not only being directed at the political elite, but the religious elite as well.

"No one represents the people, not Iran, not the parties, not the clerics. We want to take back our country," Ali Ghazi, a protester in Baghdad told news agency AFP on Thursday.