Iran′s Green Movement: Why US policies strengthen the regime | Asia | An in-depth look at news from across the continent | DW | 14.06.2019

Iran's Green Movement: Why US policies strengthen the regime

Ten years ago, the Green Movement not only challenged the Iranian regime but also Washington's Middle East policies. Now, Trump's policies have emboldened Iranian hard-liners and cornered reformists even further. 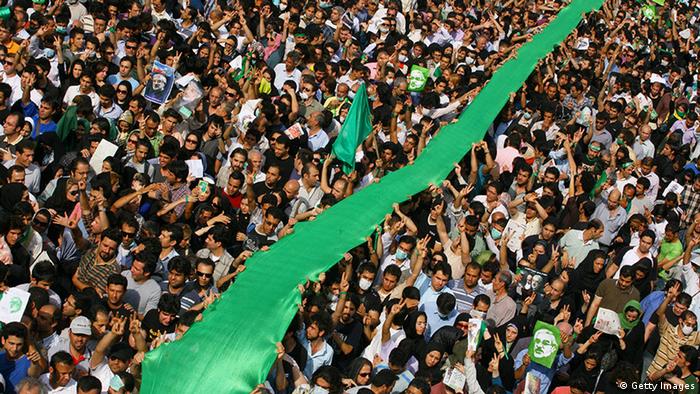 The hard-line Iranian regime, which had faced little public resistance since it seized power in 1979, was taken by surprise by a mass movement in the wake of the 2009 elections, which reformists called fraudulent. Although the mass protests were targeted at then-President Mahmoud Ahmadinejad, the country's real rulers, the Shiite clergy, could sense that it was the beginning of a larger socio-political revolt.

The regime used brutal force against the Green Movement and arrested reformist presidential candidates Mir Hossein Mousavi and Mehdi Karroubi. The massive crackdown, however, didn’t deter the millions of Iranians from taking to the streets of Tehran, Isfahan and Shiraz to defy the security forces and chant slogans against the regime. 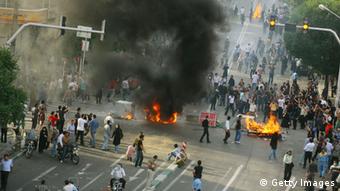 "After shaking off the blow, the regime responded with calibrated force, eventually beating the protesters back off the streets after killing dozens, staging show trials, rounding up leaders, and sentencing activists to lengthy prison terms," wrote Borzou Daragahi, an Iran expert, in a column for Atlantic Council, a Washington-based think tank, adding that Mousavi and Karroubi are still under house arrest.

The candidates for the Iranian presidency, parliament and other national offices are approved by the hard-line Council of Guardians, which leaves little room for anti-regime candidates to contest the presidential vote. Still, supporters of reformist candidates saw an opportunity to unseat Ahmadinejad and propel moderates to the presidency. The spontaneous outbreak of protests against election rigging showed the simmering anger against the status quo.

The Green Movement was not reactionary; it represented the aspirations of Iran's urban middle class that could no longer be fulfilled under a theocratic system. It demanded an overhaul of the political system,

more freedom and more rights in the country. The Green Movement, thus, was more than just the popular "Where is my vote?" slogan.

Iranian expats around the world, including the United States and Europe, backed the Green Movement. The international community also expressed its support for the demonstrators. But the Green Movement activists were also against the policies of the US and its Middle Eastern allies - mainly Saudi Arabia and Israel.

The movement's anti-imperialist stance was thus different from the regime's anti-US rhetoric. It emphasized that Washington's policies for the Middle East were actually emboldening their country's extremist regime and not weakening it.

Ten years after the Green Movement took the country by storm, it has fizzled out, and the Iranian regime is more powerful than ever. The current US-Iran conflict continues to strengthen the regime and its leader, Ali Khamenei. Before Donald Trump became US president, Iran's moderate president, Hassan Rouhani, was able to bring Iran closer to the international community, but he is no longer in the driving seat.

Read more: Iran rejects US blame for tanker attacks in Gulf of Oman

"A military confrontation with the US would be a godsend to Iran's hard-liners. They would try to use it to further militarize the domestic sphere and appropriate all levers of power," Ali Vaez, an Iran project director at the Crisis Group nongovernmental organization, told DW.

Experts have said that a military conflict in the Persian Gulf has shrunk the space for Iranian progressive groups even further. The 2017-18 protests against the ruling clergy and the feminist protests against headscarves are a thing of the past now. The anti-US and anti-Israel narrative, which the regime has used since the 1979 Iranian Revolution to consolidate its power, has gained a new life due to the latest US-Iran flare-up.

Some analysts paint a brighter picture for Iran and have said that despite the Green Movement’s perceived demise, its democratic ideals have seeped into Iranian society and are making their presence felt in an indirect way.

"Although the Green Movement has ended physically, three elements of the movement are still alive: the democratic demands of the Iranian middle class; the use of street protests as an alternative to the ballot box; and last but not least, the continued resistance," Reza Alijani, an Iranian activist who left Iran for Paris after the 2009 unrest, told DW.

"However, we should be aware of two important changes that have occurred in the past few years: the emergence of economic dissidents and the society’s insistence on more radical political approaches to deal with problems," Alijani added.

Mansoureh Shodjaei, a women rights activist based in the Netherlands, said that although the Green Movement no longer has a physical presence in Iran, the impact of its democratic approach and the types of its demands and methods have greatly influenced the Iranian politics in the past decade.

"The Green Movement represents non-violence, individuality and the importance of citizens rights and pluralism," she told DW.

But the Green Movement’s legacy is under pressure from external factors. The international community has done little to support Iran's civil society. Its policies are focused on larger narratives about geopolitics, that have weakened progressive voices in the Islamic country.

Experts have said that the failure of the Green Movement, and other moderated voices in Iran, not only expose the Iranian regime, but also the role of the international community in its dealings with Iran.

Iranian Supreme Leader Ayatollah Ali Khamenei has blamed "enemies" of the country for trying to weaken the Islamic regime. At least 21 people have been killed in six days of anti-government protests. (02.01.2018)

After four days of protests, Iranian President Rouhani has acknowledged rising frustration about the cost of living. Two protesters have died and hundreds arrested while social media and messaging apps have been blocked. (01.01.2018)

Iran rejects US blame for tanker attacks in Gulf of Oman

Secretary of State Mike Pompeo has said the US believes Iran was behind Thursday's attack on oil tankers in the Strait of Hormuz. Diplomatic tensions had already been high since attacks on four vessels last month. (13.06.2019)