Iranian journalists in Europe face threats and harassment from regime in Tehran | Asia | An in-depth look at news from across the continent | DW | 05.12.2019

Many Iranian journalists working for foreign media outlets say officials back home are harassing their family members in an attempt to silence critical reporting from abroad. DW spoke to some of the affected journalists. 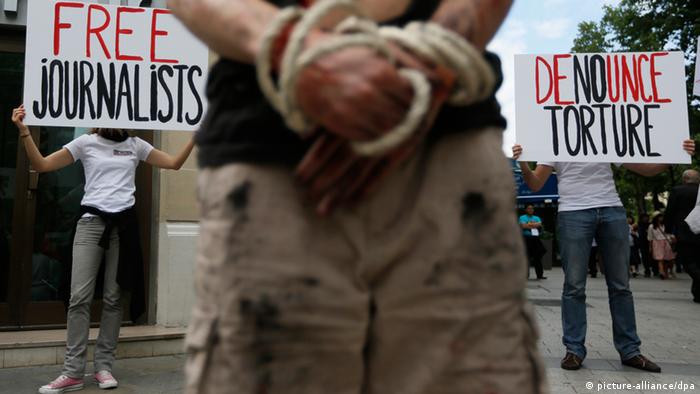 Some Iranian journalists living and working abroad have been getting bad news when calling home after discovering that parents and siblings have been interrogated and detained.

For years, Iranian authorities have been putting pressure on family members to silence critical journalists based abroad.

And the campaign of intimidation and persecution has escalated after the recent mass protests that erupted following a sharp hike in the price of gasoline. It's considered the deadliest unrest to hit the country since the turmoil of the 1979 Islamic Revolution.

Among those being targeted by Tehran are London-based, Persian-language networks like Iran International TV, Radio Farda, Manoto and BBC Persian.

The sharp rise in fuel prices sparked widespread demonstrations in Iran last month. The government responded with a security crackdown and an internet shutdown, which made it difficult to evaluate the situation on the ground.

With domestic media outlets under strict orders not to report about the protests, the role of foreign-based Persian-language channels became hugely important as alternative sources of scarcely available, objective information.

But Iranian officials accused these organizations of bias in their coverage and started imposing punitive measures on journalists working for the outlets.

In a statement released on November 30, Iran's intelligence ministry accused the Persian-language networks of promoting vandalism and fomenting violence against Iranian state institutions.

With regard to the Iran International TV channel, it said working for the UK-based outlet is "proof of collaboration in terrorist actions with the enemies of Iran."

The ministry also claimed that it had arrested a number of individuals on charges of sending information to Iran International and frozen their assets.

Threats and intimidation directed at Iranian journalists are not new. Many have also faced extrajudicial persecution over the years.

Staff working for the BBC Persian service, for instance, have been subject to official mistreatment for over a decade. This has forced many Iranian journalists working abroad to stop travelling to Iran for fear of being prosecuted.

Amir Azimi, the head of news at BBC Persian, told DW that his colleagues have experienced a new wave of threats and official harassment over the past few weeks.

On November 26, Reporters Without Borders (RSF) issued a statement, condemning "Iranian intelligence agency harassment and threats against Iranian journalists based abroad, especially in Britain, and against their families still in Iran."

Sadeq Saba is a senior journalist currently working for Iran International. Before joining the organization in 2017, he was the editor-in-chief of BBC Persian, where he had worked for 27 years. He told DW that at least 11 of his colleagues have been affected over the past two weeks.

"What Iranian authorities usually do is that they summon the journalists' family members to the headquarters of the Iranian intelligence ministry," he said. "They then force them to contact their loved ones working for foreign media outlets and urge them to stop working for these organizations and resign immediately," Saba explained.

Niusha Boghrati, the editor-in-chief of Radio Farda, told DW that Iranian authorities have also resorted to defamation to discredit independent journalists and silence them.

"They once created several fake blogs in my name and copy-pasted my own social media posts there, which left me wondering about why they were doing this. After several months, they posted a few lines that read: 'I, as the editor-in-chief of Radio Farda, regret talking to terrorists,' which was not true."

Saba and Boghrati, as well as journalists working for BBC Persian, said they regularly face abuse online, pointing to numerous websites that constantly put up content to defame reporters by spreading accusations, misinformation and fake images.

Google search results of the journalists comes up with pages that look identical to those of the BBC, Radio Farda and other media outlets; only their content is different. They contain sexual accusations, personal information and gossip, all written using vulgar language.

"The government's attempt to pressure us into submission shows that it's worried about the impact our coverage is having on Iranian society," said Boghrati.

But Azimi and Saba stress that the threats and harassment haven't had an impact on the organizations' editorial standards and that their unbiased news coverage will continue.

Saba believes that their objectivity is what makes authorities in the Islamic Republic angry.

"If we lose the battle for being factual and fair, it's going to be a happy day for them. But we are not going to let that happen. We are journalists and journalism is not a crime."

The rights group condemned the deaths as evidence that Iran's security forces went "on a horrific killing spree." Iran has not provided an updated death toll of its own. (02.12.2019)