The UK's COBRA emergency committee is discussing a response to Iran's seizure of a British tanker. After talks with France and Germany, the UK said safe navigation through the Strait of Hormuz was "a top priority." 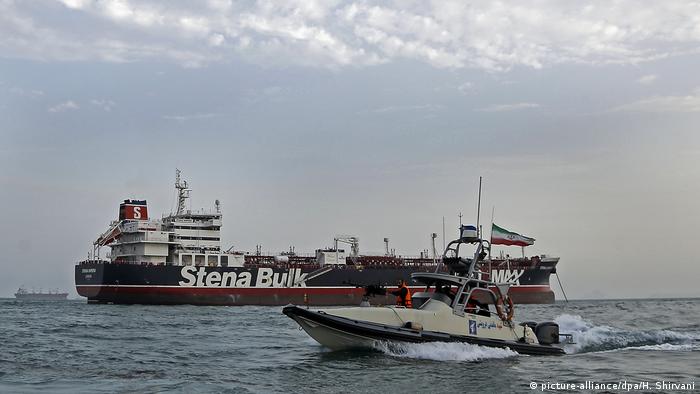 British Prime Minister Theresa May attended an emergency meeting of the country's top government and security leaders on Monday, as London mulls its reaction to Iran's seizure of a British oil tanker.

On Sunday, UK Foreign Minister Jeremy Hunt expressed "extreme disappointment" over Iran's failure to de-escalate the crisis, which began when Iran's Revolutionary Guard intercepted the oil tanker Stena Impero in the Strait of Hormuz on Friday.

After talks with his counterparts in France and Germany, Hunt said the safety of navigation through the Strait of Hormuz was "a top priority for European nations, while avoiding any possible escalation."

The UK also slammed the seizure as "illegal interference" in a letter to the UN Security Council. Hunt is expected to inform lawmakers about the government's response on Monday afternoon.

Iran has said its forces took control of the tanker after it hit a fishing boat. The UK-flagged vessel allegedly turned off its transponder and failed to respond to warnings, according to Iranian officials, who added that the fate of the ship and its 23-member crew depends on an investigation.

However, observers believe the seizure of the empty tanker constitutes a retaliation by Tehran, after Britain seized an Iranian vessel near Gibraltar earlier this month.

Read more: Is a US-led war with Iran on the horizon?

The tactics Iran used on Friday, with its troops rappelling from helicopters onto the vessel, mirrors the ones used by UK forces two weeks earlier.

UK Navy frigate HMS Montrose was in the area during the tanker seizure. Its crew was alerted but the warship was too far away to reach the scene on time. Iranian forces and the Montrose communicated by radio during the incident, according to an audio recording of the exchange published by Dryad Global maritime analysts.

'No challenge is intended'

On the recording, the Iranian forces are heard telling the tanker to "immediately" change course.

"If you obey, you will be safe," the Iranian troops say in English.

The British warship then also addresses the Stena Impero tanker, asking it to reiterate that they were in international waters and that the vessel's passage therefore "must not be impaired, impeded, obstructed or hampered" under international law.

The Iranians then tell the Montrose: "No challenge is intended… I want to inspect the ship for security reasons."

Montrose responds by telling the Iranian vessel that they "must not impede, obstruct or hamper the passage of MV Stena Impero." Despite this exchange, the Iranian forces then proceeded with the seizure.

Zarif calls for 'prudence and foresight'

On Sunday, Iran's Foreign Minister Mohammad Javad Zarif pointed the finger at US President Donald Trump's national security adviser, John Bolton, accusing him of trying to drag the UK "into a quagmire."

"Only prudence and foresight can thwart such ploys," he wrote on Twitter.