Iran has threatened "appropriate responses" after the US Congress passed a bill enabling renewed sanctions. Donald Trump has vowed to renegotiate or tear up the international deal. 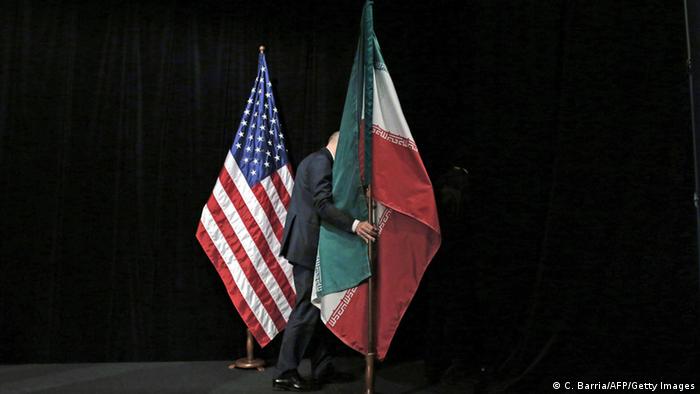 Iran said Friday the US Congress' vote to renew sanctions was in violation of the 2015 international nuclear deal and vowed an "appropriate response."

The US Senate voted 99-1 on Thursday to extend the Iran Sanctions Act for 10 years after the bill cleared the House two weeks ago by 419-1 vote. President Barack Obama is expected to sign the measure into law.

"As repeatedly stated by high-ranking Iranian officials, the recent bill passed by the House of Representatives and the Senate to renew sanctions against Iran is against the [nuclear deal]," Iranian Foreign Ministry spokesman Bahram Ghasemi said. "Iran has proved that it sticks to its international agreements but it also has appropriate responses for all situations."

US officials said renewing the bill would not violate the nuclear deal signed between Iran and six world powers - China, Russia, the United States, France, Germany, and Britain - that dropped crippling international sanctions on Tehran in exchange for Iran giving up its nuclear capabilities.

The Iran Sanctions Act would have expired at the end of the year, although the United States and other countries lifted nuclear-related sanctions in January. Washington maintains a host of other sanctions on Iran related to human rights abuses, support for terrorism and the Iranian ballistic missile program.

Iran has complained it has not received the full benefits of sanctions relief because of these other sanctions. US sanctions, while not necessarily prohibiting non-US companies and financial institutions from working with Iran, raise the cost and risk of doing business with the Islamic republic.

The US bill does not directly address the nuclear deal and the White House can issue waivers for sanctions to comply with the accord, but critics say it goes against the spirit of the agreement.

Lawmakers supportive and opposed to the nuclear accord on both sides of the aisle said renewal of the sanction bill was necessary in order allow the president to "snap-back" sanctions in the event Iran does not live up to its side of the deal.

What will Trump do?

President-elect Donald Trump has called Obama's signature foreign policy achievement "one of the worst deals I've ever seen negotiated." He has called Iran one of the largest state sponsors of terrorism and vowed to renegotiate or tear up the deal. Many Republicans want to scrap the deal entirely and impose sanctions to counter what they say are Iran's destabilizing activities in the Middle East and hostility towards Israel.

It remains unclear whether Trump's campaign rhetoric will translate into policy. His cabinet choices, including his pick to lead the CIA, Mike Pompeo, and defense secretary nominee, retired Gen. James Mattis, are hard-line opponents of Iran.

Trump's transition team is examining proposals for new non-nuclear sanctions on Iran, the "Financial Times" reported on Friday, citing congressional sources who have been in contact with the Republican President-elect's team.

The bill's passage comes days after CIA Director John Brennan warned the incoming administration in a BCC interview that scrapping the nuclear deal would be "disastrous."

"First of all, for one administration to tear up an agreement that a previous administration made would be unprecedented," he said, adding that abandoning the deal would strengthen hardliners in Iran and risk nuclear proliferation in the Middle East.

Bob Corker, the Republican chairman of the Senate Foreign Relations Committee, said the bill would enable Trump to slap sanctions on Iran if he needed to.

"Extending the Iran Sanctions Act gives us the ability to reimpose the sanctions the Obama administration lifted to implement the Iran nuclear deal and ensures President-elect Trump and his administration have the tools necessary to push back against the regime's hostile actions,” Corker said in a statement.

Ben Cardin, the senior Democrat on the Senate Foreign Relations Committee, has argued that maintaining the bill was necessary if the United States wants to retain "a credible deterrent."

EU foreign ministers have urged all parties involved in the landmark accord to stick to the commitment. Brussels' statement comes amid concerns that US president-elect Donald Trump intends to tear up the deal. (14.11.2016)

Iran has started to send heavy water to Oman to comply with the terms of its international nuclear deal. It was the second time Tehran had surpassed the 130-metric-ton threshold for heavy water. (21.11.2016)