The US president has threatened not to renew sanction waivers that make up a key part of the deal. Tehran says it will "not accept any change" to the internationally recognized agreement. 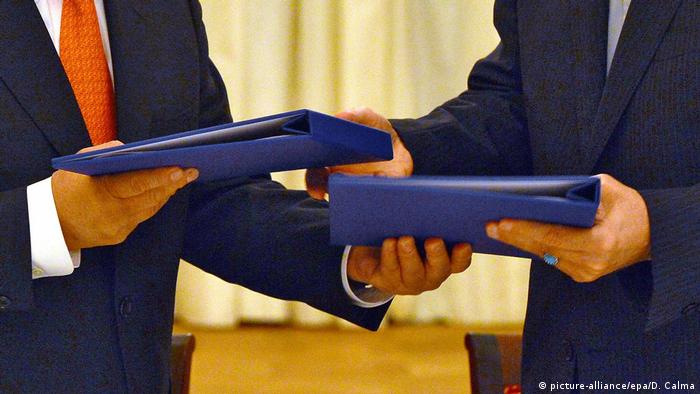 The Iranian government said on Saturday that it refused to renegotiate the terms of its 2015 nuclear deal, following comments from US President Donald Trump about the deal's "terrible flaws."

"The nuclear deal is an internationally recognized and concluded pact and is not renegotiable," Tehran's Foreign Ministry said in a statement, adding that Iran "will not accept any change in the deal, neither now nor in future."

The agreement, known as the Joint Comprehensive Plan of Action (JCPOA) was signed by former US President Barack Obama and other world leaders after two years of intense talks, marking a significant shift after decades of animosity between Tehran and the West. The deal aims to prevent Iran from creating nuclear weapons while allowing the use of nuclear energy for peaceful purposes.

US regulations require the president to endorse JCPOA every 90 days and extend waivers of economic sanctions against Iran every 120 days.

Although Trump approved the waivers on Friday, he has railed against the deal since his presidential campaign, particularly against what he calls "sunset clauses" that allow Tehran to gradually resume wider nuclear activities in the next decade.

The president charged that Iran has gotten "far too much in exchange for far too little," and threatened not to renew the waivers when the next approval period comes.

Despite signing off on the waivers, Trump's Treasury Department targeted several Iranian officials with sanctions over human rights abuses and ballistic missile development. Tehran has accused Washington of having "crossed all behavioral red lines of the international community," by targeting judiciary chief Sadegh Amoli Larijani.

Iran promised a strong reaction to the sanctions, which it said violate international law and prior US commitments.

Moscow, for its part, warned Washington that going back on the deal would be a grave mistake.

"This could be one of Washington's big foreign policy mistakes, a big miscalculation," said Deputy Foreign Minister Sergei Ryabkov, adding that Russia would work hard to keep the agreement alive.

Under Emmanuel Macron, France has sought to regain power and influence in the region. Amid escalating tensions, Iran's president suggested France play a key role by taking a "realistic" approach to emerging crises. (21.11.2017)

At least 21 people have been killed in protests across Iran. In a DW interview, analyst Paulo Casaca says the theocratic regime in Iran is domestically and internationally isolated and cannot hold on to power for long. (02.01.2018)