The protests in Iran are the result of an accumulation of unsolved problems. No matter what happens next, resentment in Iran is on the rise — people want to see change, says Mostafa Malekan.* 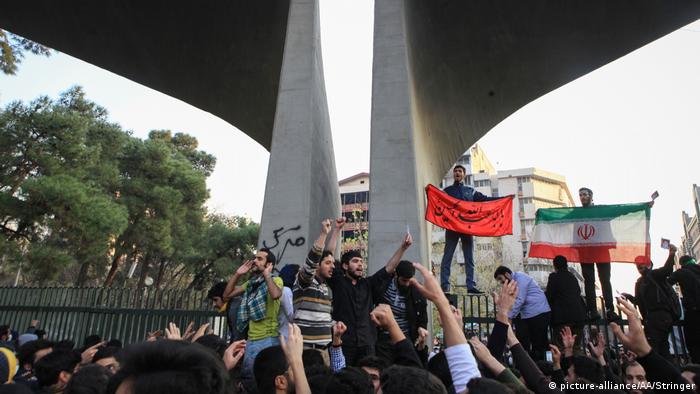 For the past two years at least, many an expert in Iran has warned that an accumulation of economic, social and political problems could lead to an uprising.

Now those predictions have come true, and the pressure of the amassed problems has swept the people onto the streets.

Four decades of the "Islamic Republic" have left their mark. More than 40 percent of the roughly 80 million inhabitants live below the relative poverty line, in some rural areas, the figure is even higher, at 60 to 70 percent; at least 11 million people live in slums around the major cities and at least one out of four young people between the ages of 15 and 24 are unemployed.

Paradoxically, Iran is by all accounts a prosperous country. Oil exports netted Iran almost $700 billion (583 billion euros) during President Mahmoud Ahmadinejad's eight years in office, from 2005 to 2013. But the money wasn't used to fight poverty or unemployment. A large part was invested in religious and ideological institutions close to the state and supportive of the system. Huge amounts were poured into the nuclear and missile programs. Billions of dollars were spent on backing Bashar al-Assad in Syria, Hezbollah in Lebanon, the Shiite popular mobilization forces in Iraq and the Houthi Shiite rebels in Yemen.

At the same time, tens of thousands of development projects in Iran have foundered for lack of funds. If only a small percentage of these international financial resources had been used for such projects, many young Iranians looking for work today would have jobs.

During the 2013 presidential election campaign, at the height of the nuclear crisis, Hassan Rouhani said the centrifuges had to turn, but so did the "wheels of life." He pledged he would solve the nuclear crisis with the West and people's everyday problems.

Rouhani managed to find a sensible solution for the nuclear crisis. But any improvement of the people's existential and economic problems is barely discernible. The reasons are manifold: Iran's eminently inefficient state economy, Supreme Leader Ayatollah Ali Khamenei's lack of support for the nuclear deal, the victory of Donald Trump in the US, Europe's hesitant cooperation with Iran and growing regional tensions — in particular with Saudi Arabia — have aggravated the situation. Rouhani has not kept his promises.

Frustration is on the rise

The current protests may have been ignited by economic demands but they have quickly turned political. At first, people protested against price hikes and the Rouhani government. Quickly, however, it was all about the system. The people have completely lost confidence in the state institutions. That is why the protests, which eventually led to violent clashes, spread so rapidly.

Read more: Protests in Iran: The genie is out of the bottle

The protests were caused by a combination of poverty and unemployment on the one hand and a lack of trust in the government and its institutions on the other hand. However, so far the demonstrations are being carried by Iran's poor urban population. Politically and culturally influential dissidents haven't yet taken part.

The government can use violence to squash the protests, at least as long as no other sections of a dissatisfied Iranian society take to the streets. That might lead to a short-term increase of power for military circles and conservative hardliners.

But it won't change the fact that people's frustrations will continue to grow and that those who demand change grow stronger by the day.

*The author is writing under a pseudonym to protect his identity.