The EU has urged Iran to show "maximum restraint" in handling protests that have rocked the country in recent days. Iranian officials, meanwhile, have arrested protest leaders and imposed a near-total internet blackout. 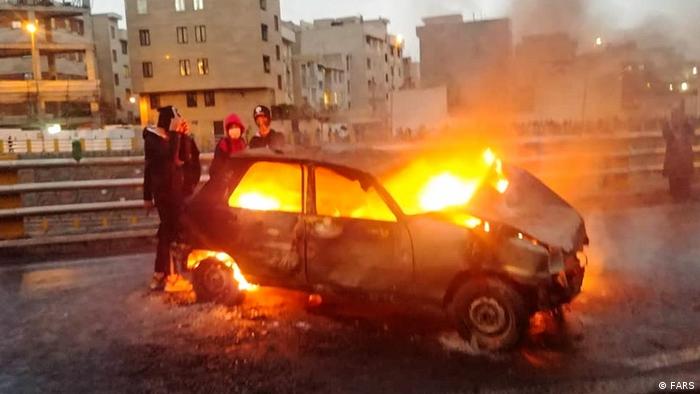 A spokeswoman for the EU on Thursday expressed condolences to the families of those killed during protests in Iran and called for dialogue to resolve the tensions.

"We expect Iran's security forces to exercise maximum restraint in handling the protests and for protesters to demonstrate peacefully. Any violence is unacceptable," Maja Kocijancic, spokesperson for foreign affairs and security policy, said in a statement.

"The rights to freedom of expression and assembly must be guaranteed."

Germany condemned Iran's security forces for using excessive force during the unrest. A statement from the Foreign Ministry said: "The right to peaceful protest must be respected. The people in Iran must have the opportunity to show their discontent with political and economic developments, and to voice their opinions freely and peacefully. We call on the Iranian security forces to exercise the greatest possible restraint."

Mass protests erupted in Iran last Friday after the government sharply raised the price of petrol, and the unrest quickly spread to cities and towns across the country.

While officials have confirmed five deaths, human rights group Amnesty International said over 100 demonstrators were believed to have been killed, and that the real toll could be as high as 200.

Meanwhile, the internet slowly returned across the country having been shut down for days by the government in an effort to stem the unrest.

Via Twitter, Secretary of State Mike Pompeo asked Iranians to send the US videos "documenting the regime's crackdown on protesters."

Given the lack of internet coverage it was difficult to obtain reliable information about the extent of the unrest. The blackout, which had reached its fifth day, had prompted Iranians abroad to tweet hashtags like #Internet4Iran and call for an end to the outage.

Iranian President Hassan Rouhani on Wednesday declared that the unrest had been put down. "The Iranian people have again succeeded in an historic test and shown they will not let enemies benefit from the situation, even though they might have complaints about the country's management," state TV quoted Rouhani as saying.

Iran's top authority, Supreme Leader Ayatollah Ali Khamenei, said on Tuesday the protests had been a security matter, not a popular movement, and had been dealt with successfully.

The country's Islamic Revolutionary Guard Corps (IRGC) issued a statement, saying the "arrest of the rioters' leaders has contributed significantly to calming the situation." Protest leaders were arrested by the Guards' intelligence arm in the province of Tehran and Alborz as well as in the southern city of Shiraz, according to the statement.

Iran's economy has taken a beating over the past year, suffering from the effects of US President Donald Trump's "maximum pressure" campaign against the country. Trump pulled the US out of the international nuclear deal Tehran negotiated with world powers and imposed unilateral sanctions on Iran.

Combined with the rising inflation, growing unemployment, a slump in the rial and state corruption, US sanctions have taken a heavy toll on Iran's economy. The International Monetary Fund forecasts that the troubled economy will contract by 9% this year and stagnate in 2020.

The Iranian government said the gasoline price rises of as much as 50% aim to raise around $2.55 billion (€2.3 billion) a year for extra subsidies to 18 million families struggling on low incomes. The monthly cash payments are set at just 550,000 rials ($4.44) per person. But the higher fuel prices have added to the squeeze felt by young people and the middle class.

Richard Grenell, the US ambassador to Germany, tweeted that the United States and EU could "turn the internet on" for Iran after the regime shut it down during protests against fuel price hikes. Here's how it could work. (19.11.2019)